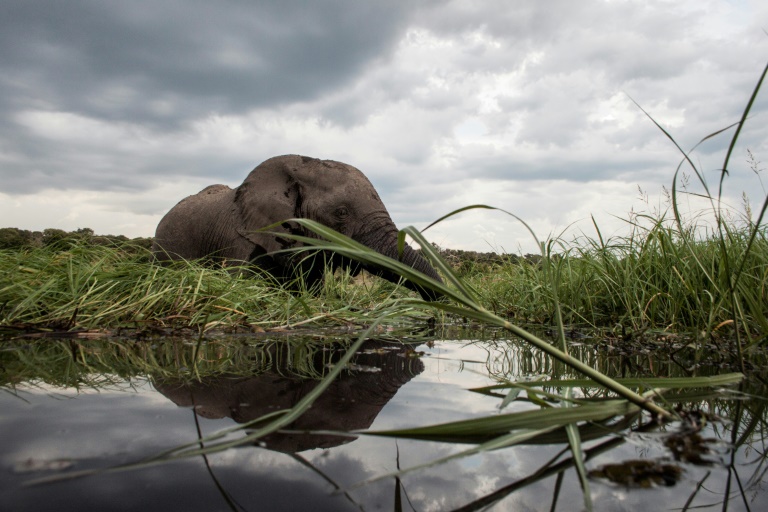 An elephant splashes in the waters of the Chobe river in Botswana, which has Africa's largest elephant population. （Photo: AFP)

Ninety elephant carcasses have been discovered in Botswana with their tusks hacked off, a charity said Tuesday, in figures fiercely contested by the government.

Elephants Without Borders said the grim discovery of scores of elephant carcasses, made over several weeks during an aerial survey, is believed to be one of Africa's worst mass poaching sprees.

The charity's scientists, who carried out the assessment with Botswana's Department of Wildlife and National Parks, found most of the dead animals were large bulls, which would have had heavy tusks.

"We started flying the survey on July 10, and we have counted 90 elephant carcasses since the survey commenced," Mike Chase, the charity's director, told AFP.

"Each day we are counting dead elephants," he added.

The wild pachyderms were shot with heavy-calibre rifles at watering spots near a popular wildlife sanctuary in the Okavango Delta.

According to Chase, the carcasses' skulls were "chopped open by presumably very sharp axes, to remove their tusks". In some cases the trunks were also removed.

"The scale of elephant poaching is by far the largest I have seen or read about in Africa to date," Chase said, adding that the poaching coincided with Botswana's rangers being reportedly disarmed earlier this year.

But the Botswana government later rejected the charity's tally of the carcasses as well as their explanation for the deaths.

"These statistics are false and misleading," said a statement on the official government Twitter account, which added that "at no point in the last months or recently were 87 or 90 elephants killed in one incident in any place in Botswana".

It said the EWB had counted 53 carcasses during the survey, adding that it had verified that most of these animals had died of "natural causes".

The statement confirmed that authorities had withdrawn weapons from rangers, but denied the move had "created any vacuum in anti-poaching operations".

"Government wishes to reiterate the fact that wildlife remains a national heritage and our citizens will protect it at all costs," it said.

Botswana had previously had a zero-tolerance approach to poaching, with a "shoot-to-kill" policy against poachers.

The landlocked country with its unfenced parks and wide open spaces has the largest elephant population in Africa at over 135,000.

"I am very concerned, it's a huge worry," he said. "I'm aware that the numbers are in double digits, and for Botswana they are high.

"Because we had been spared poaching for a long time, I think now we are realising the sophistication of these poachers.

"Unfortunately sometimes we learn these lessons the hard way," he said.

Chase said elephants in Zambia and Angola, north of Botswana, "have been poached to the verge of local extinction, and poachers have now turned to Botswana".

The number of African elephants has fallen by around 111,000 to 415,000 in the past decade, according to the International Union for Conservation of Nature (IUCN).

"Until now Botswana's elephant herds have largely been left in peace, but clearly Botswana is now in the cross-hairs," said Jason Bell, IFAW's vice president for conservation.