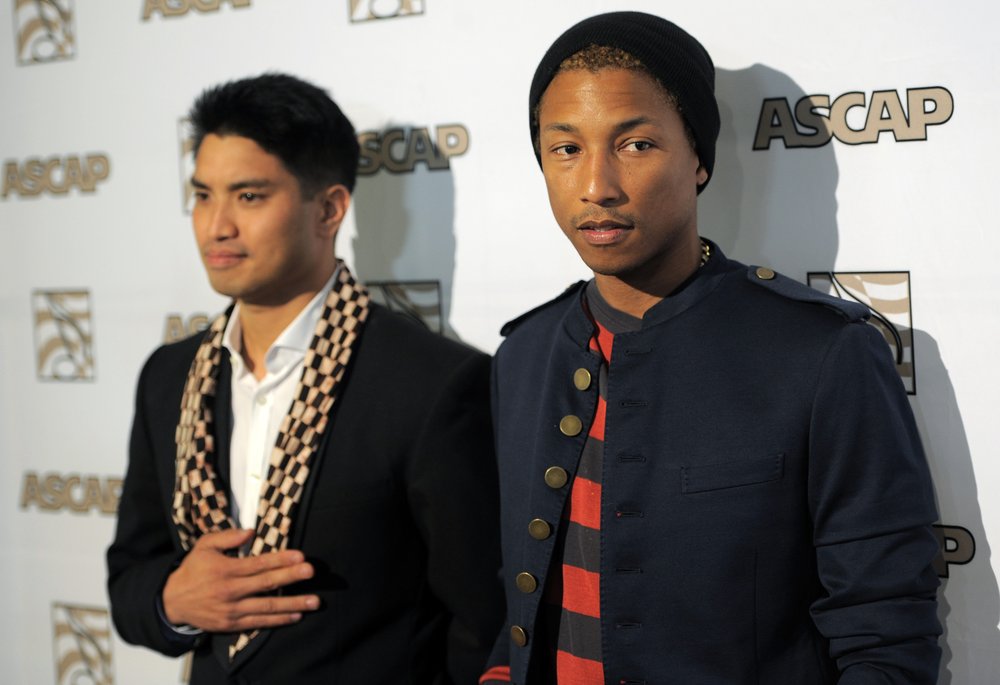 The Neptunes, the creative, innovative production-songwriting duo of Pharrell Williams and Chad Hugo who shaped pop and urban radio from the ’90s well into the 2000s thanks to crafting hits for Britney Spears, Jay-Z, Justin Timberlake, Usher, and Beyoncé, are nominated for the prestigious Songwriters Hall of Fame.

Joining the Neptunes as nominees for the 2020 class are other visionaries who have carved out their own space in the music universe: the rap icons Outkast and rock pioneers R.E.M., who announced they had called it quits in 2011.

The Songwriters Hall gave The Associated Press the list of nominees Tuesday, a day ahead of its official announcement.

Twenty-four acts are in contention for the 2020 class. Performing nominees include Patti Smith, Journey, Vince Gill, Gloria Estefan, the Isley Brothers, former Eurythmics members Annie Lennox and Dave Stewart, Mike Love, Bread’s David Gates and Steve Miller. Mariah Carey, who co-wrote 17 of her 18 No. 1 hits and earned her first Songwriters Hall nomination last year, is up for the prize again.

Songwriters are eligible for induction after writing hit songs for at least 20 years.

The Neptunes, based in Virginia, became highly sought producers and songwriters as everyone, from pop to rap to R&B stars, requested their services. Williams and Hugo worked on Billboard Hot 100 No. 1 hits such as Nelly’s “Hot In Herre,” Gwen Stefani’s “Hollaback Girl,” Snoop Dogg’s “Drop It Like It’s Hot” and Ludacris’ “Money Maker.” They crafted a number of Top 10 hits, too, including Timberlake’s “Rock Your Body,” Kelis’ “Milkshake,” Usher’s “U Don’t Have to Call,” Snoop Dogg’s “Beautiful,” N’Sync’s “Girlfriend,” Jay-Z’s “Excuse Me Miss” and “Change Clothes,” N.O.R.E.‘s “Nothin’” and Mase’s “Lookin’ at Me.”

The duo helped Britney Spears break out of her good-girl image in 2001 with the racy “I’m A Slave 4 U,” one of the singer’s traditional songs; the hitmakers produced more than half of Timberlake’s pivotal 2002 solo debut “Justified,” including the hits “Like I Love You” and “Senorita”; they helped Beyoncé enter the world as a solo singer in 2002 on her debut solo song, the funky “Work It Out”; and they assisted Jay-Z as he scored his first No. 1 hit as a lead artist on Billboard’s Hot R&B/Hip-Hop songs chart in 2000 with the anthem “I Just Wanna Love U (Give It 2 Me).”

The Neptunes also wrote and produced music for Mariah Carey, Madonna, Busta Rhymes, Shakira, Common, Toni Braxton, Cee-Lo, Solange, Faith Evans, Ciara, Omarion, 702, Mystikal and Clipse, whose first two albums were fully helmed by the duo. The Neptunes earned the Grammy Award for the non-classical producer of the year at the 2004 show.

Williams and Hugo met in the seventh grade and appear together in the alternative hip-hop trio N.E.R.D. along with Shay Haley. In recent years Williams, a 13-time Grammy winner, has produced without Hugo (two Grammys), churning out hits for other artists such as Daft Punk, Kendrick Lamar, Ed Sheeran, Ariana Grande, Migos, Beyoncé and Jay-Z. Williams also found major success with his own music, even earning an Oscar nomination for the smash “Happy,” one of the top songs of the decade.

If inducted, Outkast and Williams — who also raps and sings — could join the elite group of hip-hop players in the Songwriters Hall: Jay-Z, Jermaine Dupri, and Missy Elliott joined the organization in 2017, 2018 and 2019, respectively.

Outkast emerged from the Atlanta rap scene in the mid-90s, marking both commercial and critical success with the albums “Southernplayalisticadillacmuzik,” ″ATLiens,” ″Aquemini” and “Stankonia,” as the Southern hip-hop movement thrived. Andre 3000 and Big Boi’s fifth release, 2003′s double album “Speakerboxxx/The Love Below,” propelled them to pop star icon status, thanks to the inescapable hit “Hey Ya!” The album, which blended sounds of jazz and rock with hip-hop, became the second rap-based album to win the Grammy for album of the year, following Lauryn Hill’s win for “The Miseducation of Lauryn Hill” at the 1999 show. A rap album hasn’t won the top Grammy prize since Outkast’s win, though hip-hop heavyweights like Jay-Z, Kendrick Lamar, Eminem, Kanye West, Drake, and Lil Wayne have competed for the honor.

R.E.M. shook up the music world with its experimental, edgy sound and then earned multiplatinum success and a place in the Rock and Roll Hall of Fame. The group got its start in Athens, Georgia, coming out of the region’s flourishing indie-rock scene. The band was credited for helping launch college radio with songs such as “Radio Free Europe.” And later the mainstream caught on, and R.E.M. became chart-topping rockers, selling millions of albums with hits like “It’s the End of the World as We Know It (And I Feel Fine),” ″Losing My Religion” and “Everybody Hurts.” Michael Stipe, Peter Buck, and Mike Mills announced in 2011 that the band was done. R.E.M.’s original lineup included Bill Berry, who left the group in 1997, two years after he suffered symptoms of an aneurysm onstage, though he guest-performed with the band throughout the 2000s. All four members are nominated for the Songwriters Hall.