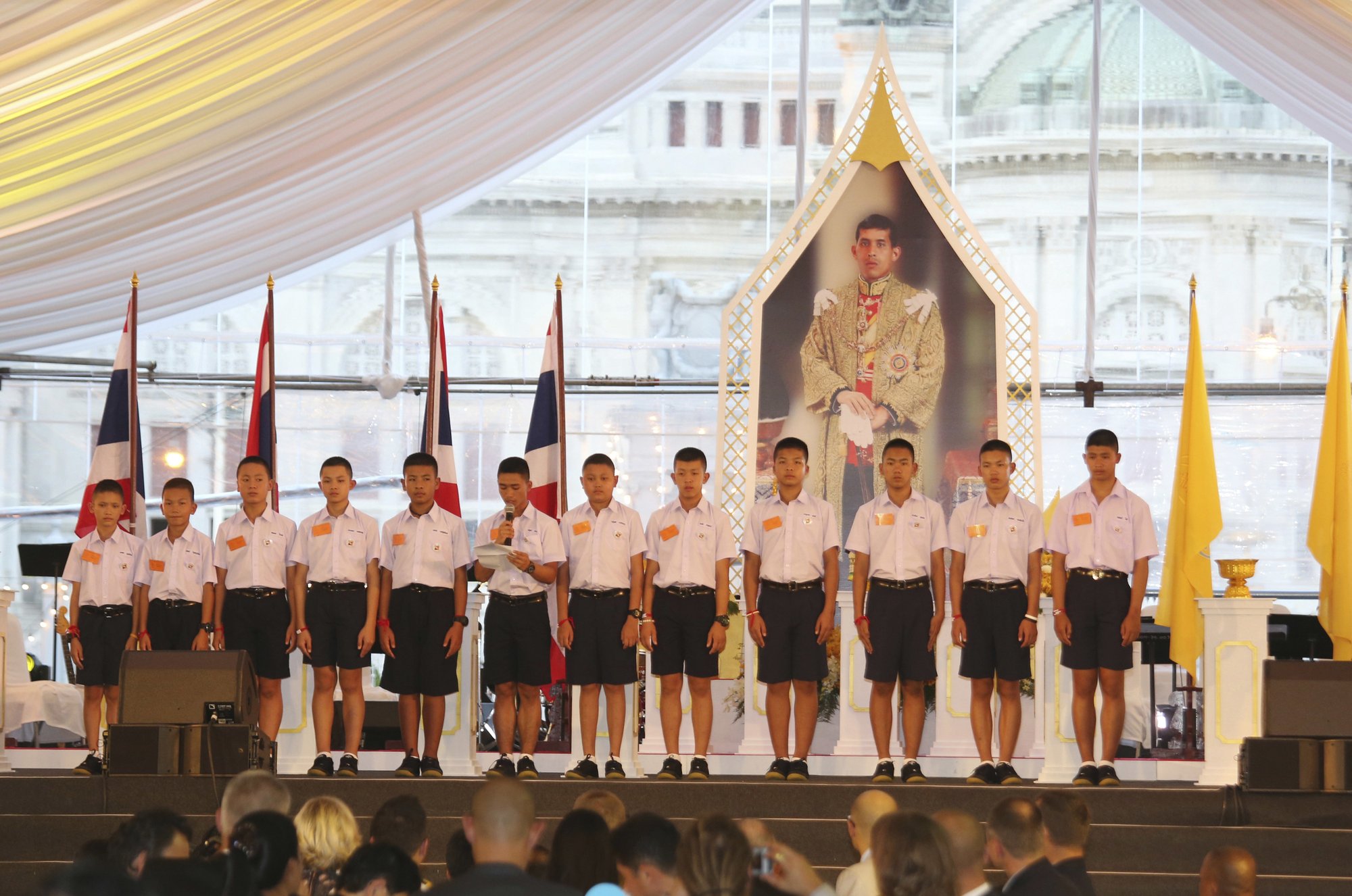 Members of the Wild Boars, the soccer team that was rescued from a flooded cave, give thanks in front of Thailand King Maha Vajiralongkorn's image during an event titled "United as One" in Bangkok, Thailand. (Photo: AP)

Netflix announced Tuesday it is joining with the production company for the movie “Crazy Rich Asians” to make a film about last July’s dramatic rescue of 12 village boys in northern Thailand who were trapped with their soccer coach in a flooded cave for more than two weeks.

Netflix and SK Global Entertainment said in Bangkok they have acquired the rights to the story from 13 Thumluang Co. Ltd,, a company that Thailand’s government helped establish to represent the interests of the boys and their coach, who attended the news conference for the announcement.

Thailand’s Culture Ministry in March first unveiled the deal, announced as a miniseries. Deputy government spokesman Weerachon Sukoondhapatipakat was quoted then as saying that the families of the cave survivors would each be paid 3 million baht ($94,000).

The boys of the Wild Boars soccer team and their coach became a center of world attention after they became trapped in the cave on June 23 last year, with doubts they were able to find shelter from rising flood waters that poured in after unexpected rain. They were found by two British divers and brought out by an international crew of experienced cave divers who teamed up with Thai navy SEALs in a dangerously complicated mission that was successfully concluded on July 10.

“We are grateful for the opportunity to thank the people and organizations from Thailand and around the world who came together to perform a true miracle, by retelling our story,” said Ekapol “Ake” Chanthawong, the boy’s assistant coach who shared the ordeal with them. “We look forward to working with all involved parties to ensure our story is told accurately, so that the world can recognize, once again, the heroes that made the rescue operation a success.”

Tuesday’s announcement said 13 Thumluang “has committed to donating 15% of the revenues derived from bringing this story to global audiences to charity organizations that focus on disaster relief.”

Jon M. Chu, who helmed “Crazy Rich Asians,” and Nattawut “Baz” Poonpiriya, a Thai filmmaker, will be directors on the cave project.

“We are immensely proud to be able to support the retelling of the incredible story of the Tham Luang cave rescue,” Erika North, director of International Originals at Netflix, said in a statement. “The story combines so many unique local and universal themes which connected people from all walks of life, from all around the world. Thailand is a very important country for Netflix and we are looking forward to bringing this inspiring local but globally resonant story of overcoming seemingly insurmountable odds to life, once again, for global audiences.”

The rescue was a rare bit of feel-good news from Thailand, which has been mired in political conflict and heavy-handed military rule for more than a decade. The cave rescue also allowed the government of Prime Minister Prayuth Chan-ocha, who had seized power in a 2014 military coup, to share in some glory.

An independent film about the adventure, “The Cave,” was shot soon after the rescue and is supposed to be released later this year.