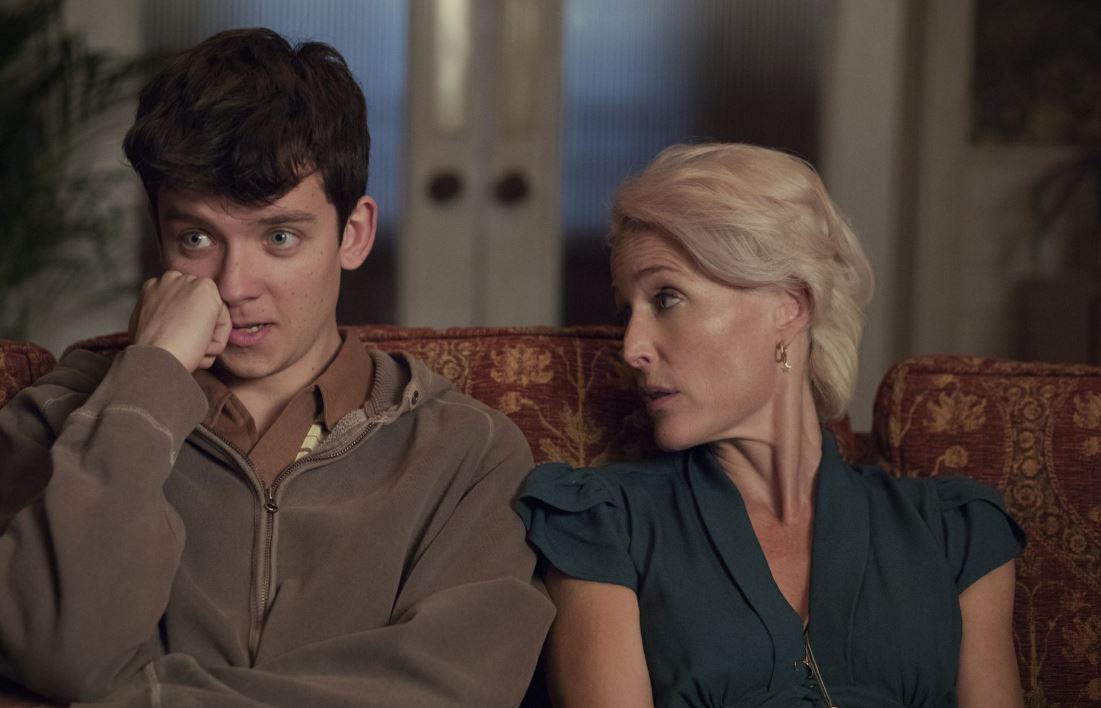 This image released by Netflix shows Asa Butterfield, left, and Gillian Anderson in a scene from "Sex Education." (Photo: AP)

Among the bumper crop of original series debuting this month on Netflix is one that’s both a time warp and a trans-Atlantic hug. It’s called “Sex Education” and it’s like a classic John Hughes high school comedy bloomed in the United Kingdom.

In this quirky and refreshing series, Anderson and Asa Butterfield of Martin Scorsese’s “Hugo” play mother and son, each exploring the contemporary sexual landscape. And the real landscape for this often frank discussion of sexuality is, well, not specific.

The eight episodes of the first season were shot mostly in southeast Wales. And while the actors have English accents, they throw around American footballs on campus, wear letter jackets and plan for prom. The soundtrack is rich in 1980s songs, from The Smiths to Billy Idol.

“It is this kind of Nowheresville,” said Butterfield. “We don’t say where it is and it’s got these rolling hills and these people dress a bit like they’re from the ’80s. It has kind of got a timeless vibe to it which I think really helped make the show stand out.”

Butterfield plays a smart but socially awkward 16-year-old student who has had little sexual experience, despite living with his sex therapist mom. “He’s like this sex wizard but he is cursed with the inability to do anything with all this information,” Butterfield said of his character.

He teams up with a smart-bad girl to create an underground sex therapy clinic, leaning on the knowledge he’s absorbed over the years. There’s plenty of nudity and blunt examination of everything from same-sex love, abortion and wet dreams. Netflix itself describes the show as “heartfelt, raunchy and irreverent.”

Anderson plays blunt single mom Jean, whose home is filled with sex manuals and toys. She’s so open about the topic that she has no problem snooping around her son’s bedroom or asking embarrassing questions about his sexuality while they’re watching a movie.

“I don’t often get to mix odd with comedy. My odd characters have been quite serious and disturbing, and so jumping into something that had that to offer was definitely a plus I think,” she said.

“Sex Education” was created and written by Laurie Nunn, who shows a knack for the often-savage food chain of teenage popularity and a sympathetic eye for its hormonal-addled members. Her humor shines, too, as when one student, who has ingested too much Viagra, announces: “I feel lightheaded and I can taste scampi.”

The series also benefits from some rising talent, including Emma Mackey as a smart outcast (she corrects the grammar in graffiti that targets her) and Ncuti Gatwa, playing Butterfield’s best friend and moral compass. (When asked by Butterfield’s character what he should wear for a date, Gatwa replies: “Think Jon Hamm, but chilled. Like casual Hamm.”)

Anderson said she was attracted to a show that explored the common issues associated with puberty, in all its joy and messiness. She noted that the series comes at a time when society is embracing the concept of everyone being who they are.

“Then how about addressing it to the best of our ability by putting it out there as unflinchingly and honestly as possible? And with humor, which is always the best way and not taking oneself too seriously or itself too seriously,” she said.

Anderson and Butterfield both hope Netflix will green light a second season and send them back to Wales. But even if it doesn’t happen, Anderson — a mother to three, including a boy approaching puberty — is grateful for the roadmap of what NOT to do.

“I think there are some definite differences in Jean’s parenting skills than mine,” she said, laughing. “So it felt as much like an education for me observing the emotional trajectory of Asa’s relationship with Jean.”