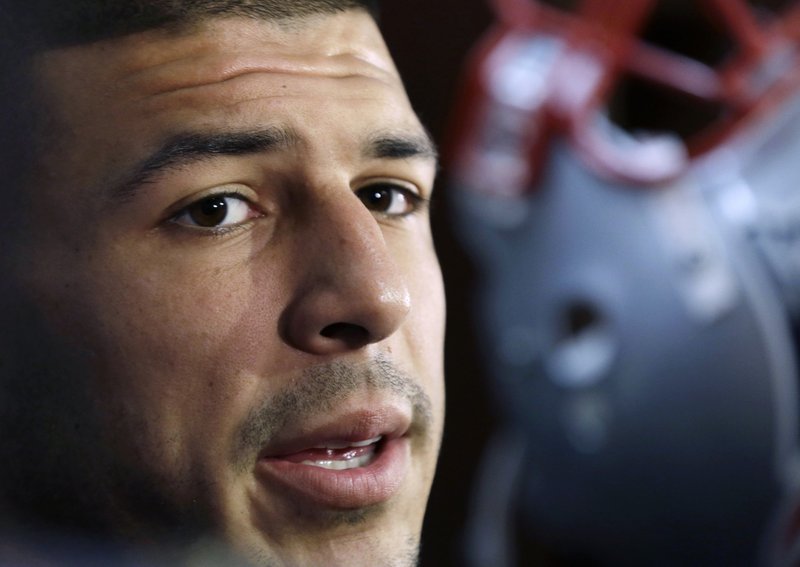 More than two years after he killed himself in his prison cell, former NFL star Aaron Hernandez’s story still fascinates — and now it’s heading back to the small screen.

Netflix is releasing “Killer Inside: The Mind of Aaron Hernandez” on Jan. 15. The three-part documentary examines the meteoric but troubled — and violent — rise and fall of the late New England Patriots tight end.

A teaser for director Geno McDermott’s film opens with chilling audio of a collect call Hernandez made to his fiancee, Shayanna Jenkins. Hernandez can be heard saying: “My whole body’s shaking right now.” Jenkins asks, “What happened?” and Hernandez responds: “You know my temper.”

In July, Hernandez’s estate settled a wrongful death lawsuit brought by the families of two men he was acquitted of killing. Prosecutors alleged Hernandez fatally shot Daniel de Abreu and Safiro Furtado in 2012 after a confrontation at a nightclub. Hernandez killed himself in prison in 2017 while serving a life sentence for the 2013 murder of semi-professional football player Odin Lloyd.

Hernandez’s death came just a few days after he was acquitted of most charges in the double murder case. After his death, doctors found the 27-year-old Hernandez had advanced chronic traumatic encephalopathy, a degenerative brain disease linked to concussions and other head trauma commonplace in the NFL.

Transcripts the Bristol County sheriff released last year of more than 900 jailhouse telephone conversations Hernandez had with family and friends showed he expected to be released from jail and resume his football career shortly after his arrest for Lloyd’s killing. Hernandez had a five-year, $40 million deal with the Patriots at the time of his arrest.

McDermott and producer Terry Leonard say the latest film will feature some of those phone calls as well as courtroom footage and interviews with those closest to Hernandez and Lloyd. The project, they said in a statement, “examines the perfect storm of factors leading to the trial, conviction, and death of an athlete who seemingly had it all.”

Filmmakers and authors have had no shortage of material to work with in recounting the story of the handsome, polite athlete from Bristol, Connecticut, who was a high school standout and an All-American at the University of Florida before his three seasons with New England and subsequent fall from grace.

A state police report of the investigation into Hernandez’s death said the player wrote “John 3:16,” a reference to a Bible verse, in ink on his forehead and in blood on a cell wall. The verse says: “For God so loved the world, that he gave his only begotten Son, that whosoever believeth in him should not perish, but have everlasting life.”

A Bible was nearby, open to John 3:16, with the verse marked by a drop of blood. And authorities said Hernandez was a member of the Bloods street gang and had been disciplined for having gang paraphernalia in prison.