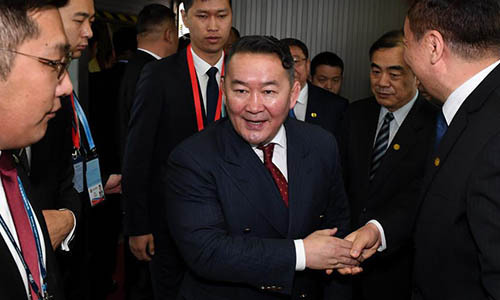 Mongolian President Khaltmaa Battulga on Thursday became the second foreign leader to visit China after the COVID-19 outbreak, following Cambodian Prime Minister Hun Sen who visited China on February 5, as he donated 30,000 sheep to China to support the Chinese people's fight against the virus.

Chinese President Xi Jinping Thursday held talks with Battulga at the Great Hall of the People in Beijing, the Xinhua News Agency reported.

Hailing Battulga as the first foreign head of state to visit China since the outbreak, Xi said the special visit by Battulga to express consolations and support to China fully embodies the high attention he pays to China-Mongolia ties and the profound friendship between the two peoples.

"This vividly shows that the two neighbors are in the same boat and working hand in hand to help each other," Xi said.

According to a video released by the China Central Television, after the meeting with Xi, Battulga, on behalf of his country, presented a certificate of ownership of 30,000 Mongolian sheep to Xi, as a donation to China to support the fight against COVID-19.

The Chinese people made a lot of comments on social media to show their appreciation, the topic of "Mongolian President donated 30,000 sheep to China" received more than 100 million views on Sina Weibo as of press time.

Many of them joked that they were thinking about hot pot and barbeque as lamb is popular in Chinese cuisine.

"Gosh, I really want to eat one. Thank you Mongolia!" read one comment on Sina Weibo.

"How could we transport those sheep from China-Mongolia border to Hubei Province? How about we make some lamb dumplings and send them to the medical workers in Wuhan?" said another.

"Thirty thousand sheep worth about 60 million yuan ($8.65 million) in China, what a concrete donation from a developing country. The US said they will donate about $100 million, but where is it?"

This is not the first donation from Mongolia. Mongolian Prime Minister Ukhnaa Khurelsukh said at a recent meeting with Chinese Ambassador to Mongolia Chai Wenrui that the Mongolian government has donated $200,000 for China's epidemic control effort and Mongolia is willing to continue to provide necessary support to China, Xinhua reported on Thursday.