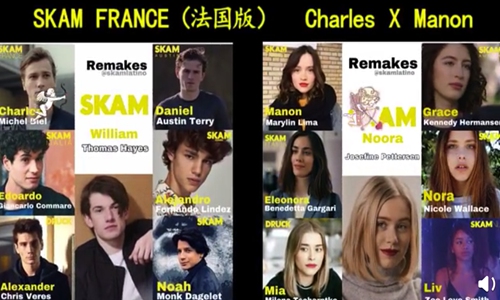 The Chinese remake of Norwegian web series Skam, which has been adapted in eight countries, will start shooting in July. The news has sparked controversy among Chinese netizens, many of whom have said they are against the adaptation.

The Chinese version, titled Rebel, sets the background of the story on a school campus, according to a poster for the show released on China's Twitter-like Sina Weibo.

Rebel will tell the story of a group of university students as they take on the challenges of life such as friendship and romance, Beijing-based media outlet Vista reported.

The related hashtag "Skam getting Chinese remake" has been viewed 240 million times as of Tuesday on Sina Weibo.

The news sparked concern among some fans of the original, who said they worried that the Chinese adaptation wouldn't be able to capture the brilliant parts of the series and may end up ruining the classic show.

"I am worried about recomposing quality of the Chinese version. Some Chinese scriptwriters do not have ability to make sense of a story," a Chinese fan of the original show who goes by the online handle Junyixiao told the Global Times on Tuesday. Similar to other Chinese netizens, she predicts that the possibility that certain plot points will be changed is very high.

Since confusing problems including eating disorders and mental health issue are the spiritual core of the series, she said that she feels "the characters in the series will not be fully expressed."

Netizens have also expressed dissatisfaction over the designs of some of the lead characters that have been released on Sina Weibo.

Junyixiao said that there is no difference between these character designs and those seen in other Chinese romance series.

"If the remake is shot in line with these designs, it will completely fail at expressing the uniqueness of Skam. So I suspect that they are only using the IP of the show to make money off of fans."

Many netizens said they doubted the Chinese production team's ability to remake the show due to previous failures such as Hide and Seek, the Chinese adaptation of the South Korean film of the same name.

Some netizens said they are still sitting on the fence and will wait to judge the show's quality after its debut.

"I want to give China's production teams another chance and hope they will not let me down," one netizens wrote.

Adapted in eight countries including France and Italy, Skam focuses on the daily lives of teenagers at the Hartvig Nissen School. Each season has focused on a particular topic ranging from relationship difficulties to identity and eating disorders.