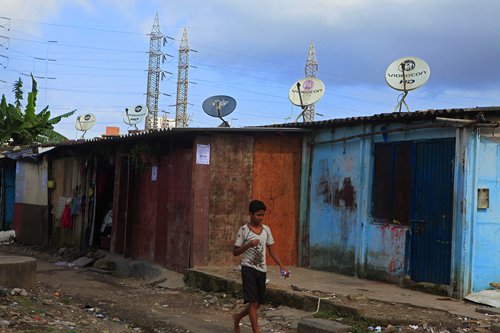 Multiple television dish antennas are seen on a slum in Mumbai. (Photo: IC)

Indian movies have once again attracted the attention of Chinese netizens recently. But instead of being showered in praise as their previous works have, this time they were ridiculed for purposely using exaggerated plots to promote nationalism and depict China as the enemy in stories about the 1962 China-India border war.Chinese netizens have dubbed these movies as a made-in-India "anti-China series." The two latest Indian movies that have come under fire are 72 Hours: Martyr Who Never Died, which was released on January 18 and Subedar Joginder Singh, which was released in April 2018.Both movies tell stories based on real soldiers who fought against the Chinese army in 1962. Despite the result of the war being known clearly to the international community, both movies depict the soldiers as brave but tragic national heroes. Chinese experts and netizens commented that such movies showed that Indians are unable to get over the crushing defeat of the 1962 war and are indulging in an act of self-deception. Despite the fact that the 1962 war started as a result of India's constant provocation in the border area, India is making such movies to defame China and to promote nationalism. Creating a heroBut it is the movies' exaggerated plots that Chinese netizens have directed most of their scorn at. In the movie Subedar Joginder Singh, the eponymous Indian soldier led his regiment in "beating back" three attacks from the Chinese army on October 23, 1962. When thousands of Chinese soldiers launched another attack in the early morning, Singh shot 52 of them with a machine gun and killed several with a knife. The Chinese army was beaten back while Singh's regiment suffered massive casualties. He finally decided to abandon the defense in order to protect his comrades-in-arms. He refused medical treatment from the Chinese side and died, according to India Times. The weapons used by the Indian army in the movie were the Britain-made Bren guns, a kind of light machine gun, and the Lee-Enfield rifles, which is in accordance with historical records.

However, when it comes to the weapons for the Chinese army, the stage property department seems to have let their imaginations run wild - Chinese soldiers are wearing the same uniforms as Japanese invaders during World War II, and the fighter jets that drop bombs in the Indian fronts were Mitsubishi A6M Zero, a long-range fighter aircraft used by the Japanese, according to a video made by Chinese netizens ridiculing the movie. "We could have thought that this was an India-made anti-Japanese movie if not for the Putonghua spoken by the Chinese soldiers. And even then the Putonghua is barely comprehensible to Chinese," said the video. "Why do the Indian soldiers have endless supplies of bullets and how does the protagonist pull out the bayonet from the machine gun directly with his hand?" some netizens wondered, remarking that "from the movie, we can see how the China-India war has traumatized India."A similar scenario appeared in the movie 72 Hours: Martyr Who Never Died, in which the protagonist Jaswant Singh Rawat refused to retreat with his infantry division and fought the Chinese army alone for 72 hours. Some Chinese netizens have compared India's "anti-China" movies and TV series to some of China's controversial TV series on the War of Resistance against Japanese Aggression. Many viewers called the drama "brain damaging" and "offensive to history."

"Exaggerating real heroes in wars even by distorting history is not paying respect to true heroes. India chooses to make national heroes as it likes to 'rewrite' the result of the 1962 war - a crushing defeat and humiliation in reality, but a victory in the films," Luo Luo, a Beijing-based movie critic, told the Global Times.She noted that Chinese netizens voluntarily rejected such overly dramatic anti-Japanese TV series, and the government has taken measures against them, but she asked when the Indians will realize the problems created by these "anti-China" movies?The Chinese government has been taking measures to curb such dramas since 2013. The State General Administration of Press, Publication, Radio, Film and Television ordered a provincial-level TV station in Southwest China to send a show about the war that it recently purchased back to the state agency for rechecks, a source told the Global Times previously on condition of anonymity. However, Indian audiences seem to enjoy these movies. On Rotten Tomatoes, an American review-aggregation website for film and television, 86 percent of the viewers "liked" Subedar Joginder Singh.Undeniable truthExperts said that many Indian movies on the 1962 war lack respect for history, and portraying China as "invaders" among the Indian people is not the right way to develop future ties with China. "History has already drawn a conclusion to the 1962 war, and even from a third party perspective. For example, Neville Maxwell, a journalist from a Western country, wrote that it was India that provoked China into the 1962 war," Qian Feng, a research fellow at the National Strategy Institute of Tsinghua University and director at the Chinese Association for South Asian Studies, told the Global Times.Maxwell was a journalist and historian who covered the 1962 war as The Times' India correspondent. He uncovered a top-secret Indian war report that criticized India for pursuing a flawed strategy of provoking China, South China Morning Post reported on July 6, 2017. "Pushed by the Nehru government's so-called forward policy," Indian troops were told to advance from their existing positions to the disputed areas along the China-India border and force the Chinese soldiers out of their border posts. The Chinese army had to fight back," Qian said. Between October and November 1962, the Indian troops collapsed and retreated in disarray in the face of the Chinese soldiers in the eastern and western directions along the China-India border. "In history, the Chinese army gained a one-sided victory in the 1962 war, which showed the Indian army was no match for the Chinese army at that time. Many Indian war movies ignore that fact," Song Zhongping, a military expert and TV commentator, told the Global Times. In response to movies depicting the Chinese army as "invaders," Song said that in history, China won the war and took the initiative to declare a cease-fire and withdraw the troops. China showed its good will by releasing prisoners of war and returning seized weapons.Experts said that the growing nationalism in India in recent years has created a market for these anti-China movies and TV series. "More than 65 percent of the population in India is under 35 years old, which means they are more competitive and influenced by nationalism. The Indian government is encouraging nationalism to help with its dream of becoming a power. Under these conditions, India's Bollywood has made movies about the 1962 war," Qian said, noting that "however they retell the story, their crushing defeat cannot be changed in history."Song said that "nationalist education should be based on respect for history. Bollywood movies like 72 hours will merely stir up anti-China sentiment among the Indian people and finally develop into populism.""Moreover, shaping China's image as the enemy in films can also lead to misunderstanding between Chinese and Indian people, which would not benefit mutual ties," Song said. Instead of cementing the conflict, Bollywood should focus more on movies that will facilitate future communication."