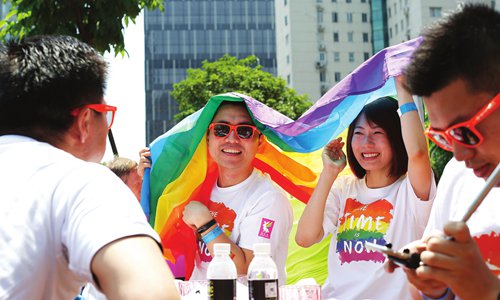 A commercial of China's biggest e-commerce giant featuring LGBTQ expression was hailed by the Chinese LGBTQ community as "a positive signal."

In this 23-second video clip, a boy brought his male companion home for celebrations of the Lunar New Year and introduced him to his family. The ad ends when the boy's partner refers to his partner's father as "Dad," causing an awkward atmosphere at the table.

The video went viral online with many netizens calling it a rare case of LGBTQ expression being featured in a Chinese commercial, and a small first try with significant progress.

Some netizens even questioned if the move implies China is one step closer to legalizing gay marriage as Alibaba supports the gay community in its ad.

"We love to see Chinese companies to demonstrate the friendly face of gay people… such promotion is welcomed by us," Peng Yanhui, director of LGBT Rights Advocacy China, a Chinese NGO, told the Global Times.

Peng predicted such a move will give Alibaba an edge in promotion as pink money has an influence that "should not be ignored by Chinese companies."

Yue Zhongming, spokesperson of the Commission for Legislative Affairs of the National People's Congress Standing Committee, said in December that they have been advised to include the legalization of same-sex marriage in the civil code when the draft civil code solicited public opinions from October 31, 2019 to November 29, 2019.

In 2014, another Chinese e-commerce dangdang.com also released a promotional poster featuring members of the LGBTQ community. The poster stresses the importance of encouraging serious love between gay people.