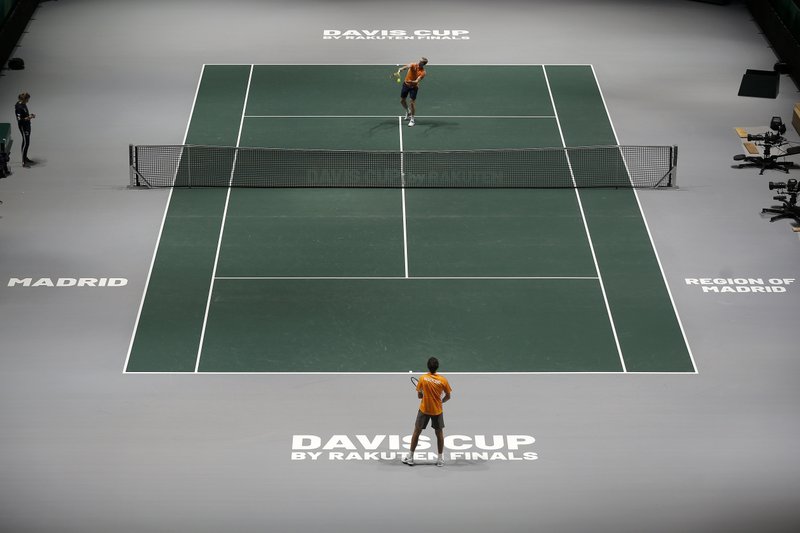 The famous face behind the biggest overhaul in Davis Cup history can’t hide his anxiety.

The men’s international team tournament that begins Monday in the Spanish capital will look nothing like the first one in 1900, nor any other edition after that.

“To tell you the truth, I’m a bit nervous,” said Gerard Piqué, the Barcelona soccer star who is one of the founders of the group behind the new-look tournament.

For the first time, teams will compete in the same venue and at the same time in a World Cup-style format that organizers hope will be more attractive — and lucrative — than the head-to-head confrontations that took place in the past.

There will be more attractions for fans off the court, too, with high-profile artists providing entertainment at the “Caja Mágica” (Magic Box) tennis complex, including Colombian singer Shakira — Piqué’s wife.

“I want everything to go well, and I know that everything will go well. I’m a very optimistic and positive person,” said Piqué, one of the founders of the Kosmos group that is organizing the new Davis Cup in a partnership with the International Tennis Federation.

Eighteen nations and 90 players — including top-ranked Rafael Nadal, Novak Djokovic and Andy Murray — will be in the Spanish capital for the inaugural Davis Cup Finals.

“It will be a spectacle,” Spain player Feliciano López said. “We have to thank everybody for making this happen. The atmosphere will be incredible this week.”

Organizers said 100,000 tickets have been sold for the season-ending tournament that will attract more than 700 journalists to Madrid and will be broadcast to more than 170 countries.

“The competition will be much easier to follow for all kinds of audiences as the title will be decided in just one week,” Kosmos Tennis CEO Javier Alonso told The Associated Press.

The 18 teams will play in six groups of three, with the group winners advancing to the knockout stage along with the two best second-place teams. The nations will play within their groups Monday-Thursday, with the knockout rounds Friday-Sunday. The matches will take place on hard courts in three stadiums in morning and afternoon sessions that will include two singles matches and a doubles match.

In past years, the competition featured head-to-head matchups played at varied sites over four weekends throughout the year, a tradition some critics — and some players — didn’t want to see changed.

But the ITF said the 25-year partnership with Kosmos was key to increasing revenue and aiding the local tennis federations worldwide.

Having the new competition condensed into a single week and one venue helped attract new sponsors, and made it easier for top players to include the Davis Cup in their busy schedules. Prize money of $20 million in total, rivalling those awarded in Grand Slams, also helped attract players.

“People can expect of course a big event with the best tennis players of the world representing their countries, and also a new entertainment concept for the competition, with big stars taking part in the opening and closing ceremony such as Shakira and Alan Walker,” Alonso said. “With this new formula new audiences will also get involved in Davis Cup.”

The new formula should bring new life to the event, but it also added some unprecedented logistical challenges, with organizers having to build 18 separate changing rooms for each team at the Caja Mágica, which usually hosts the Madrid Open. Seven additional training courts also had to be built to accommodate all teams.

Home-crowd favorite Spain, featuring the top-ranked Nadal, will be in the toughest group along with Russia and defending champion Croatia. Murray, trying to make a comeback from injury, will lead Britain’s team, while Australia will feature the hot-tempered Nick Kyrgios. Among those missing because of injury are Japan’s Key Nishikori and Canada’s Milos Raonic. Roger Federer is not playing because Switzerland didn’t qualify.

The soccer player who helped make the changes just can’t wait for the competition to finally begin.

“It was more than year ago when the new format was approved, and now we are just a few days away from the beginning of the competition,” Piqué said. “We hope the fans can have a good time and that the competition is exciting for everyone.”