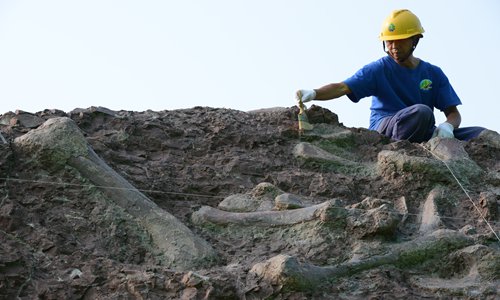 Chinese scientists recently discovered new dinosaur species in Southwest China's Chongqing Municipality. Researchers found the fossils of three types of dinosaurs, namely theropoda, basal ornithopods and plesiosaur, in Chongqing's Yunyang county, said Wei Guangbiao, a vice president of the Chongqing Institute of Geological Survey. Two of the three specimens are new species of dinosaurs, the first of their kind to be discovered anywhere in the world, which is a breakthrough for exploring dinosaur groups in this area, Chongqing Daily reported on Sunday. Wei said that they have not decided on names for the new species yet, and are considering inviting netizens to suggest possible names. Along with the discovery of new dinosaur species, Wei said that they also discovered an 18-kilometer "fossil wall" that contains dinosaur fossils in the area. The wall belongs to the Jurassic strata, which dates back 174 million years. Researchers found more than 4,000 pieces of dinosaur fossils there. Dai Hui, chief engineer of the Chongqing Bureau of Geology and Minerals Exploration, said that it remains unclear how long the wall is, but "I can say that the scale of the wall is unique worldwide," he added. The "fossil wall" was first discovered two years ago, which was just 150 meters long, and contained at least 17 distinct groups of fossils.Since the first discovery of dinosaur fossils in 1957, nearly two-thirds of the districts in Chongqing have found fossils, including one of the most complete carnivorous dinosaurs in Asia, the Chongqing Morning Post reported. The report said that Chongqing is known as a city built on the backs of dinosaurs because of its rich resources in dinosaur fossils.