The new archaeological discoveries at the Sanxingdui Ruins site in southwest China's Sichuan Province are a great achievement for the whole world, archaeologists said in recent interviews with Xinhua. 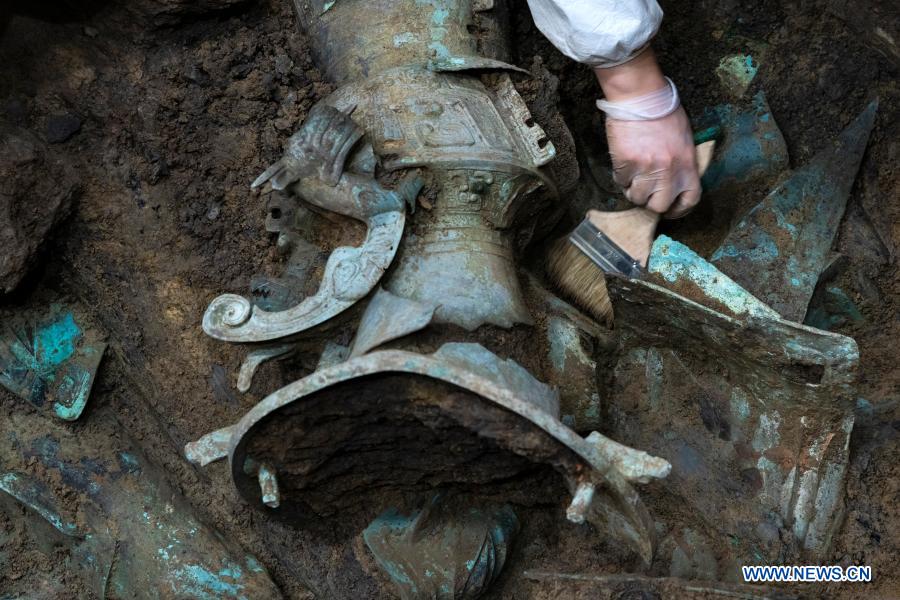 An archaeologist works at a sacrificial pit of the Sanxingdui Ruins site in southwest China's Sichuan Province, March 10, 2021. (Photo: Xinhua)

"These discoveries are very important because they explain an important historical period of the Chinese civilization, which helps researchers know more about this important period," said Professor Mohammed Salih Attia, assistant director-general in the department of investigation and excavations at Iraq's State Board for Antiquities and Heritage.

Specialists studying on ancient civilizations in Mesopotamia and Egypt would also be motivated to compare the similarities and interconnections of their discoveries with those from Sanxingdui Ruins site, Attia said.

Attia called for enhancing cooperation with China to benefit from its advanced experiences in the field of archaeological excavations, to learn about the modern technologies used by Chinese experts.

"We invite Chinese experts to come to Iraq and participate in the excavation operations, as the land of Mesopotamia is rich in ancient civilizations," Attia told Xinhua.

"In Iraq, we have a plan for excavations. We are waiting for the funds allocated for that in the current annual budget, so we can implement it," he added.

Archaeologists have found six new sacrificial pits and unearthed more than 500 items dating back about 3,000 years at the Sanxingdui Ruins in Sichuan Province, the National Cultural Heritage Administration announced.

Archaeologists have unearthed various important cultural items from four of the pits, including pieces of gold masks, gold foil, bronze masks, bronze tree relics and several ivory pieces. The rest of the newly discovered pits are still under excavation.

"The excavations include many unique items, which would enrich civilized museums after documenting and identifying, then the world can see the latest archaeological discoveries in China," said Junaid Amer, another archaeological researcher at the Iraqi State Board for Antiquities and Heritage

"Discovering any civilizations are achievements for all humanity, because the cultural diversity is a bridge between the past and the present, for people to understand about and learn from the history," Amer said.