CULTURE New exhibition at Beijing's Capital Museum, Qinghai in the Belt and Road, shines spotlight on the beauty and culture of the province

New exhibition at Beijing's Capital Museum, Qinghai in the Belt and Road, shines spotlight on the beauty and culture of the province 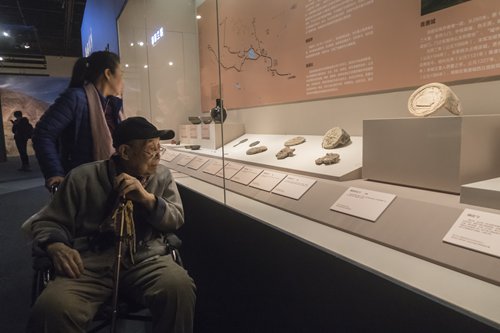 Visitors explore the Qinghai in the Belt and Road exhibition at Beijing's Capital Museum on Thursday. (Photo: IC)

The Qinghai in the Belt and Road special exhibition kicked off on Thursday at the Capital Museum in Beijing. Boasting more than 400 cultural relics from Northwest China's Qinghai Province, the exhibition examines the province's geography and historical development from the perspective of agriculture and nomadism to show the important role it played as a major stopping point along the ancient Silk Road.

Located in the remote northwestern portion of the Qinghai-Tibet Plateau, the province covers an area of 720,000 square kilometers and has an average elevation of more than 3,000 meters above sea level. Connecting the Mongolian, Plateau and the Qinghai-Tibet plateaus, the region, home to some 6 million people, has been a key gateway between Central, South and East Asia since ancient times.

Its beauty stems back to a time before human beings even called it home. Hundreds of millions of years ago, the shifting of the tectonic plates that formed the Himalayas created the most magnificent natural landscape in the history of the Earth. Glaciers, snow-capped mountains, lakes, rivers, grasslands, deserts and river valleys together constitute the magical and magnificent beauty of Qinghai. Home to the "King of mountains," the Kunlun mountain range, Qinghai is also known as the "Water Tower of China" as it is the source of the Yellow, Yangtze and Lancang rivers.

Qinghai has a long history. Stone tools show that human activity in the area dates as far back as the Paleolithic period, some 30,000 years ago.

From the vast and fertile Hehuang Valley to the endless Qaidam Basin, many ancient cultural relics from the Neolithic Age have been found, such as those from the Majiayao and Qijia cultures. These many cultural relics show Qinghai Province has long played an important part in contributing to the multi-cultural nature of Chinese civilization.

During the Qin (221BC-206BC) and Han (206BC-AD220) dynasties, nomadic tribes in what is now North China began to invade Central China. With the establishment of Jincheng county during the Western Han Dynasty (206BC-AD25), the eastern portion of Qinghai was officially incorporated into the centrally managed empire to fight against invasion. During the Eastern Han Dynasty (AD25-AD220), Xiping county was separated from Jincheng county to better strengthen the defense of the dynasty's western border. Xiping is now known as Xining, the capital of Qinghai Province.

It was during this time that Qinghai became the main thoroughfare for the Silk Road to connect East and West.

The exhibition brings together 442 artifacts from 13 cultural institutions in Qinghai. These numerous fine cultural relics include exquisite painted pottery works, early bronzes, silk and a large number of religious artifacts.

One of the prominent cultural relics is a colored pottery basin from the Neolithic Majiayao culture. Twenty-four dancing figures decorate the outside of the basin. The figures wear large head decorations and round ball decorations on their waists, providing valuable insight into the cultural events and dress of the people who lived in the Qinghai region during ancient times.

A golden sculpture from the Han Dynasty is decorated with a scene illustrating the cruelty of nature. The small sculpture, 15 centimeters in length and 9.5 centimeters wide, depicts mountains, forests and a wolf biting the hind leg of a struggling cow. Fluid lines give the scene a strong feeling of movement. According to experts, the relic was meant to be hung on a wall and was a symbol of social status.

During the Tang Dynasty (618-907), the further opening of the Silk Road introduced culture from other civilizations to China. For instance several bead chains are on display at the exhibition. Due to the influence of Persia, these bead chains became a popular accessory during the Tang. Another display shows off a gilded silver waist belt that was unearthed in Qinghai Province. Consisting of seven silver plates connected by thin silver wire, the belt is decorated with depictions of gods not native to China, making for a great example of how the traditional patterns of the period were absorbing cultural nutrients from foreign culture and art.