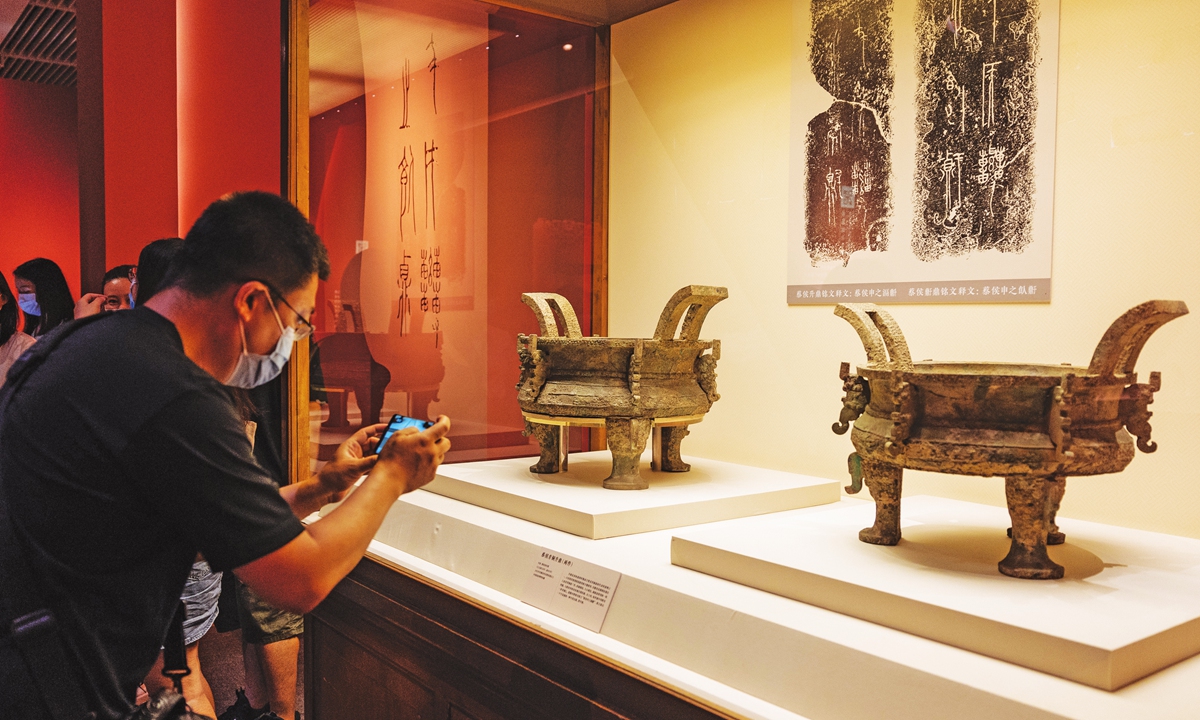 A visitor takes photos of a bronze Chinese ding (tripod food vessel) at the National Museum of China on July 26, 2022. (Photo: GT)

China, South Korea and Japan are close not only geographically, but also culturally, with economic ties dating back more than 1,000 years ago. A new exhibition at Beijing's National Museum of China is tapping into this shared heritage by displaying ancient bronzes from the three neighboring countries in East Asia.

From Chinese bronze food and wine vessels and musical instruments to Korean bronze daggers, mirrors and bells and Japan's bronze spears, swords and bells, The Auspicious Metals from the Orient exhibition offers visitors the chance to learn about the distinctive cultural traditions and technological and artistic achievements of the three countries and how they have learned from each other.

"The use of bronze is a major marker of civilization, which makes it a powerful proof of exchanges between different civilizations around the world and the inclusiveness and vitality of Chinese civilization," Wang Wei, president of the Institute of Archeology Chinese Academy of Social Sciences and veteran expert on East Asian history and culture, told the Global Times on Sunday.

Wang said that in East Asia, the production and use of bronze wares originated from China about 5,000 years ago and then spread to the Korea Peninsula during China's Eastern Zhou Dynasty (770BC-256BC) and later to Japan.

Symbols of a nation

Among ancient civilizations, the emergence of bronzes greatly contributed to the development of the economy and society.

According to Wang, the ancient bronzes of East Asia evolved through religious rites with a unique and profound significance that went beyond their practical functions, giving structure to the great depth and breadth of oriental bronze civilization.

"Bronze wares were also one of the symbols of noble social status in Chinese society, which influenced the civilizations of Japan and the Korea Peninsula," said Wang, who spent four years studying in Japan.

"Although more bronze weapons were made in the latter two areas, ritual vessels still played an important part in some key events like worshiping ancestors and gods."

The 50 bronze artifacts from the collections of the national museums of China, South Korea and Japan fully represent the distinctive cultural traditions and technological and artistic achievements of the three nations.

The wide use of ritual vessels was a major characteristic of ancient Chinese bronze culture. As emblems of status and rank for the pre-Qin Dynasty (221BC-206BC) aristocracy, records of family honor and symbols of wealth and prestige, bronzes were not only significant markers for maintaining social order and political landscape, but also important carriers of cultural inheritance. In ancient Korea, daggers, mirrors and bells, symbolizing the unification of political authority and ritual authority were also very important, whereas ancient Japanese bronze culture was represented by weapons, ornaments, musical instruments and household utensils.

Ancient Chinese people learned how to make bronze wares from West Asia and then made changes and innovations to adapt them for local social conditions. When these skills traveled to Korea and Japan, these cultures also continued to localize them to fit their own tastes.

"The 'techniques' and 'symbolism' of Chinese bronze wares, as represented by the Li Yue (rites and music) culture of the pre-Qin period, reached Japan and South Korea a long time ago," Liu Zheng, a member of the China Cultural Relics Academy, told the Global Times on Sunday.

"But, such Chinese bronze cultures then developed their own aesthetic characteristics and differences in techniques in the two East Asian countries. Such derivation shows the mutual learning between the three countries." 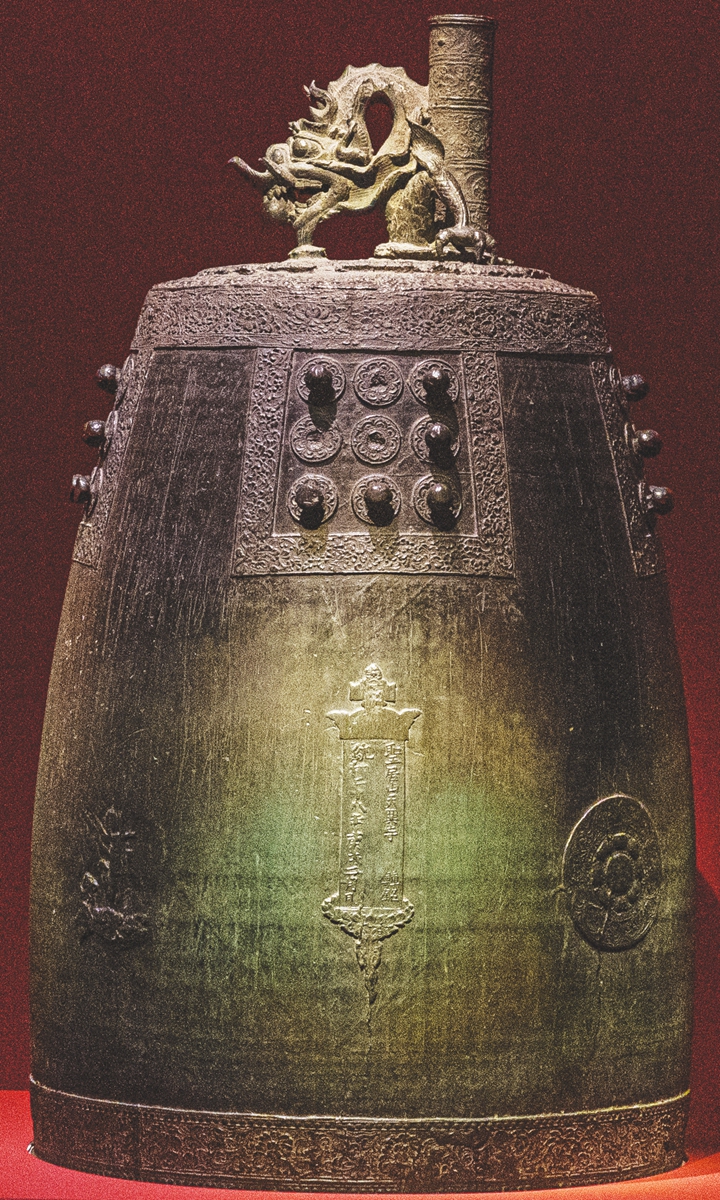 The Goryeo Buddhist Bell from the National Museum of Korea is such an example. On the very top of the bell is a dragon-shaped handle for hanging the bell. The two sides of the bell are marked with striking points where the clearest sound can be produced - just like Chinese bells - while the other two sides are decorated with designs of a flying apsara. One side of the bell bears an embossed description inside a frame that resembles a mortuary tablet, a new stylistic element that is believed to have emerged during ancient Korea's Goryeo Dynasty (918-1392). According to the inscription written with Chinese characters, the bell was produced in 1010 at Cheonheungsa Temple near Mt. Seonggeo in Cheonan, South Korea, making it the oldest extant bell from the dynasty.

"Putting this in historical context, China, Japan and South Korea have shared cultural beliefs. This is not only embodied by the Buddhist religion, but also the three's similar 'value systems' - they all focus on making developments based on 'traditional culture,'" added Liu.

The exhibition, which is jointly hosted by the National Museum of China, the National Museum of Korea, and the Tokyo National Museum of Japan, aims to mark the 30th anniversary of the establishment of diplomatic relations between China and South Korea and the 50th anniversary of the normalization of diplomatic relations between China and Japan. The exhibit, the direct result of the cooperation agreements established by museums in China, South Korea and Japan in 2006, aims to boost exchanges and mutual learning with other civilizations. Through cooperation, a special digital exhibition kicked off on Tuesday at the Tokyo National Museum of Japan featuring national treasures from China's Palace Museum such as Northern Song Dynasty (960-1127) painter Wang Ximeng's masterpiece Thousand Miles of Mountains and Rivers.