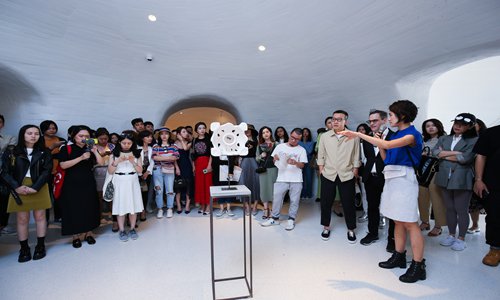 Aranya, an up-and-coming community in North China's Hebei Province, has been attracting flocks of tourists with its beautiful seaside and tasteful architecture. There is the seashore library, which has been dubbed "the world's loneliest library," and there are also the uniquely designed Art Center and a local branch of Beijing's Dusk Dawn Club.

While these are attractive enough to bring people to the town on their own, the UCCA (Ullens Center for Contemporary Art) Dune Art Museum is giving people an additional reason to visit with the brand new exhibition: Notes from Pallet Town.

Prior to its opening on Sunday, UCCA Dune invited guests and press to an opening ceremony and exhibition tour on Saturday. The exhibition presents artworks by artists from Hong Kong and the mainland who were all born after the 1980s. The "Pallet Town" in the title refers to the village in Pokemon, the famous Japanese video game and anime series. The organizers chose this as the title to represent the impact Japanese culture had on these artists as they were growing up.

"In a certain sense, the architectural environment in China is close to achieving that futuristic, idyllic sheen found in the background of such cartoons, yet the deeper implications and potential by-products of such a perfect image warrant further exploration," UCCA said in a press release.

The UCCA Dune Art Museum was designed by Chinese architects Li Hu and Huang Wenjing from OPEN Architecture. Covering an area of 930 square meters, the museum is nestled in the sand on a quiet beach along the coast of North China's Bohai Bay. The white building is also surrounded by dunes, making it appear to be hidden between the sea and the sand.

The inside of the museum, also mainly white, provides a space that inspires visitors to contemplate the relationship between humanity, nature and art. There is an ocean-view café, and a series of different-sized contiguous cave-like galleries of different sizes. Some of them are connected by tunnel-shaped passages. The windows in the galleries vary from one another, as some are framed in the ceilings and some face the sea. Visitors can observe the changes of the sky and sea and how the different lighting impacts the artworks.

Notes from Pallet Town was specially curated for the UCCA Dune Art Museum, and it continues UCCA Dune's curatorial focus on the relationship between humanity and nature. Artists Leelee Chan from Hong Kong, Guo Cheng from Beijing and the artist duo Hao Jingfang (from Shandong Province in East China) and Wang Lingjie (from Shanghai) were invited to create art specifically for the exhibition. The participating artists came of age at a time when Japanese imports helped define the cultural image of China, with Pallet Town representing a particular dream image of contemporary East Asia, UCCA noted.

Some of the works on display make use of technology, but employ it as a means to highlight natural phenomena or illusions.

Take The (Temporary) Gadget Series by Guo Cheng for instance. The installation combines a variety of materials such as circuits, Geiger counter radiation detectors, carbon fiber tubes, cement bricks and aluminum. The tubes, detectors and circuits are connected to large chunks of bricks with spindly stems to create an image of insects crawling along on tree branches. There they await the decline of global radiation to its level prior to atomic weapons testing, according to the press release.

"To some extent, the work bears the resemblance to the amber that contains animal and plants from prehistoric times. Nuclear weapons created by human turns into something permanent. I randomly picked up the rocks and the cement bricks from the seaside. Like animal and plant parts trapped in amber, which will last forever, the cement in the installation may be the only evidence of humanity's existence after we go extinct," explained Guo at the opening ceremony on Saturday.

Artist duo Hao and Wang picked a unique gallery for their installation Under this Small Star. The window for the room is set in a cave-like ceiling. The installation appears is a fountain of water that ripples under the light as sounds come from a speaker.

"We chose this gallery because of the special design of the window. It echoes with humans' imagination about the starry sky which can be traced back to a long time ago. Back in the 1970s, NASA sent two spacecraft to space: Voyager 1 and 2. The spacecraft carried two phonograph records that contained the sounds of the Earth. The sounds playing in the installation here are from the Voyager Golden Records," Wang explained during an exhibition tour.

As for Chan's work, it is made up of materials she found discarded around the neighborhood where her studio is located in Hong Kong, such as polystyrene packaging, construction lights, wooden pallets and cosmetics containers. She assembled them into sculptures and installations mimicking nature. In her work Pallet in Repose (Portal), for example, she presents different perspectives of a painting using discarded mirrors and glass. By incorporating these abandoned materials into her artwork, Chan hopes to explore the idea about the traces urban life may leave in the distant future.

These installations at exhibition were largely abstract.

Without the artists' illustration, much would be left to the audiences' own imagination. It may not necessarily be a bad thing, as each visitor will launch their version of dialogue on the relationship between human and nature.