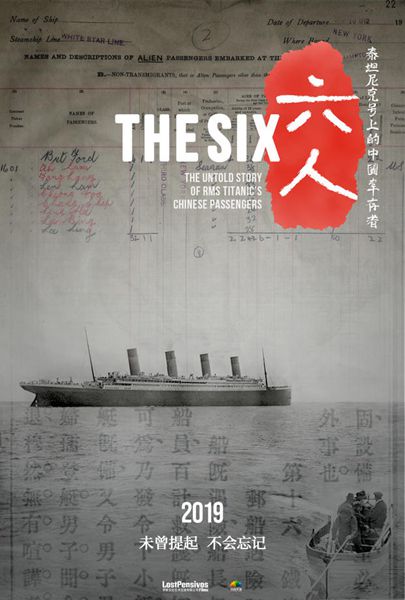 A Chinese poster of "The Six: The Untold Story of RMS Titanic's Chinese Passengers" (Image: courtesy of LostPensivos Films)

A new documentary film by British filmmaker Arthur Jones will hit Chinese theaters this year to reveal the untold story of six Chinese survivors on the doomed ocean liner Titanic, which sank more than a hundred years ago.

"The Six: The Untold Story of RMS Titanic's Chinese Passengers" was promoted at an annual national conference held in Shenyang, Liaoning province where executives from film studios and theater chains nationwide convened to promote future releases in China. A new poster of "The Six" was released.

The documentary will take audiences on a journey to discover how the six Chinese passengers survived after the huge ship they were on sank.

Since the sinking of the British passenger liner Titanic in 1912, experts have been trying to uncover the truth behind the tragedy. According to public records, Titanic was the largest ship afloat at the time, but it sank in the North Atlantic Ocean in the early morning hours of April 15, 1912, after it collided with an iceberg during its maiden voyage from Southampton to New York City. There were an estimated 2,224 passengers and crew on board the ship, and more than 1,500 died.

Its survivors, along with the mystery that shrouded the disaster, became legends that countless books and movies have told over the decades. One of the more memorable ones, "Titanic,"which was directed by James Cameron in 1997, became one of the highest-grossing epic films of all time.

But out of over 700 survivors of the Titanic disaster, the six Chinese survivors were the only ones who didn't have a chance to share their experiences. "The Six" tells their stories and it's also expected that Chinese audiences will feel a greater affinity to them since they share a similar culture and nationality. The film will follow the lives of the six Chinese passengers after they survived the disaster, and meticulously piece together their unheard and forgotten stories.

According to historical evidence as well as personal accounts that Jones' team collected a total of eight Chinese men worked on cargo ships traveling between China and Europe. The men boarded the Titanic in England on a single ticket which listed eight names. They all worked as stokers who tended to the steamship's furnace, and stayed in the third-class cabin. Among them, Lee Ling and Len Lam died in the disaster, and the names of the six survivors were Lee Bing, Fang Lang, Chang Chip, Ah Lam, Chung Foo and Ling Hee. Fang Lang was found on a piece of floating wreckage, while the others made it onto lifeboats. Four of the men shared a lifeboat with Joseph Bruce Ismay, the owner of Titanic.

However, when the six survivors finally arrived in the United States, the discriminatory Chinese Exclusion Act, which was in force at the time, forced them to leave the country within 24 hours.

Since then the Chinese survivors had disappeared from history books and their absence left many unanswered questions. In order to trace the survivors' descendants, Jones and his team went to the United States, Britain, Canada, Cuba and several other countries and eventually located some of the men.

Jones, who has been living and working in China for over 20 years, worked with Steven Schwankert, the lead researcher and historian for the film. Both men had begun making the film since 2015 and trying to piece together the forgotten truth of one of the deadliest commercial peacetime maritime disasters in modern history. The film is scheduled for release in 2019.