Another gold mask discovered at the Sanxingdui Ruins site in Guanghan, Sichuan province, is the biggest of its kind unearthed at the site so far and further illustrates the custom of the ancient Shu people to use gold items, experts said. 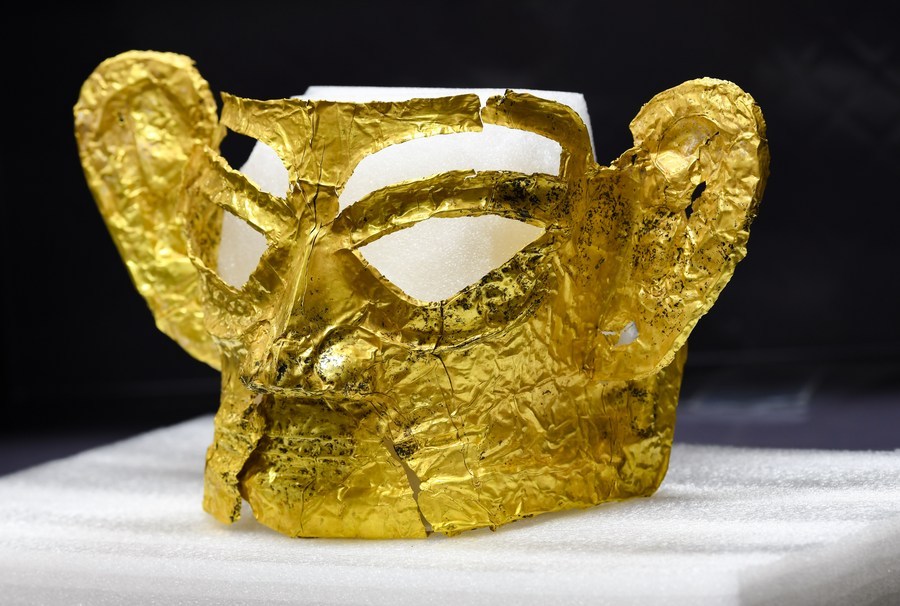 Photo taken on Sept 2, 2021 shows a golden mask discovered at the No 3 sacrificial pit of the Sanxingdui Ruins site in Southwest China's Sichuan province. (Photo: Xinhua)

The mask, which is relatively intact, is 37.2 centimeters wide, 16.5 cm high and weighs about 100 grams. It was discovered at the No 3 pit, the Sichuan Provincial Cultural Relics and Archeology Research Institute said on Thursday. Earlier this year, a likewise eye-catching gold mask was found at the No 5 pit.

The institute announced the discovery of 1,771 cultural relics from the No 3 and No 4 pits, of which 557 are relatively intact and the rest are fragments. Among the items, the gold mask is a highlight.

Gold items were found at the Sanxingdui Ruins site as early as 1986, including gold foil pieces that show how the precious metal was used by the ancient Shu people. Shu was an ancient state in what is now Sichuan.

Xu Feihong, a Shanghai University lecturer who is in charge of the excavation of the No 3 pit, told chinanews.com that the gold mask was found in June. After restoration, it turned out to be the biggest complete golden mask found at the site, with fine texture and quality.

Relatively intact relics from the pits include 314 bronze objects and 147 elephant tusks. 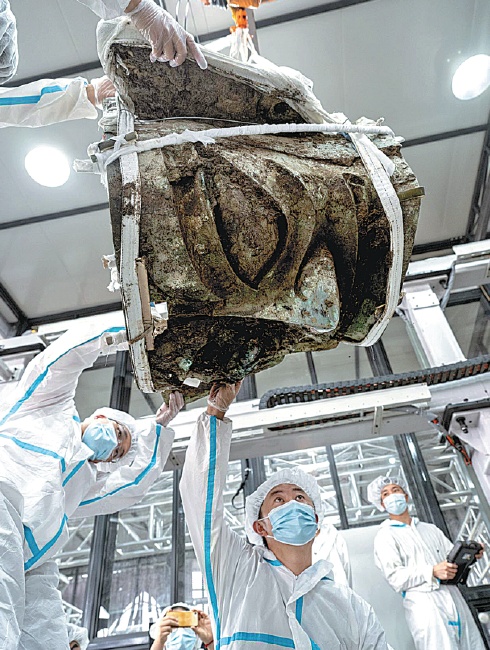 A large bronze mask unearthed in May is one of more than 500 relics discovered in recent months at the Sanxingdui Ruins site in Sichuan province. Archaeologists are impressed with the historical value of the objects and the creativity and ingenuity of their designers. (Photo by YU JIA/FOR CHINA DAILY)

A unique bronze artifact from the No 3 pit features a man carrying a bronze vessel known as a zun that has a round rim and a square body, said Ran Honglin, an archaeologist at the institute.

Three bronze figures, with their palms pressed together and their heads twisted to the right, have been excavated from the No 4 pit.

These three bronze figures are a unique find among Sanxingdui items in terms of their shape and decorative pattern, and they provide further material for studying the bronze casting technology of the Shu people as well as their art, religious beliefs, social system and cultural exchanges with surrounding areas, Ran said.

The digging of the No 3 pit undertaken by Shanghai University and Ran's institute started on Jan 9 and is expected to be completed in the next two months. Excavation of the No 4 pit, which the institute began in October last year, was completed on Aug 19.

The Sanxingdui Ruins site, which is 40 kilometers north of Chengdu, the capital of Sichuan, covers 12 square kilometers. Archaeological discoveries show it was a highly developed and prosperous cultural hub established between 2,800 and 4,800 years ago.

The site was discovered by accident in 1929 when Yan Daocheng, a villager in Guanghan, unearthed a pit full of jade and stone artifacts while repairing a sewage ditch at the side of his house.

From the 1930s onward, many archaeologists have conducted excavations at the location. A breakthrough came in the 1980s, when the remains of large palaces and parts of the eastern, western and southern city walls and two large sacrificial pits, now known as the No 1 and No 2 pits, were found.

The findings confirmed that the site housed the ruins of an ancient city that was the political, economic and cultural center of the Shu Kingdom.

Chen Xiandan, a leading archaeologist in Chengdu who took part in excavations of the site in the 1980s, said that before the excavation work was carried out, it was thought that Sichuan had a history of just 3,000 years. Thanks to this work, it is now believed that civilization in what is now Sichuan goes back 5,000 years.