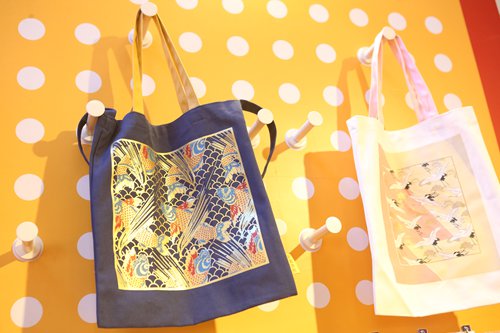 A tote bag at the Palace Museum's cultural and creative products store in Shanghai (Photo: IC)

In recent years, people have seen museums in Chinese cities change a lot. What used to be stern and cold institutions have moved closer to people's lives in order to attract more visitors. In 2009, the total number of visitors to museums in the Chinese mainland exceeded 10 million visitors, while in 2018 alone more than 17 million visitors traveled to the Palace Museum in Beijing, making it one of the most visited museums in the world. At the capital's National Museum of China, more than 3 million people visited a major exhibition commemorating the 40th anniversary of China's reform and opening-up, while the number of views for the online exhibition exceeded 367.7 million. Since free access to public museums was set as a goal by the Ministry of Culture and Tourism, service efficiency and social attention has continuously improved as museums across China began to explore new management models including expanding exhibition areas, launching more exhibitions, starting museum education programs and promoting the creative development and transformation of museum resources. "New" has become a keyword in the development of museums. Taking it with youThe development of cultural and creative products has allowed visitors to bring museum culture home with them so they can appreciate the beauty of traditional culture in their daily lives. New regulations launched by the Beijing government have allowed cultural relic institutions to reward the developers of these creative products with 70 percent or more of revenue earned. It has also provided policy protection for cultural and creative product development in museums. The next step museums must take is to improve their marketing and brand building to promote their cultural and creative products. The most popular cultural and creative products in 2018 were the souvenirs produced by the Palace Museum. Talented designers combined cultural relics with phone cases, soap, mugs and daily use items. For instance, one tote bag has a decoration based on an ancient silk brocade in the museum's collection, while another popular item was a notebook modeled after memorials written by the emperor. In previous decades, Chinese usually didn't like to have Chinese traditional decorations on their personal items as they saw them as being out of date, but now the rising popularity of these creative products has brought tradition back into fashion. High-tech advancementThe advancement of science and technology and the development of the media have opened new possibilities for museums. The TV series National Treasure broadcast by the China Central Television station carried out in-depth exploration of traditional relics by explaining their role in China's economic and social development. On the technological side, the high-tech interactive art exhibition Along the River During the Qingming Festival 3.0 interweaved real people and a famous painting that shows people in Dong Jing, the capital of the Northern Song Dynasty (960-1270) (today's Kaifeng in Henan Province) celebrating the Qingming Festival. The size of the original ancient artwork, only 24.8 centimeters from top to bottom, makes it difficult to see the small figures in the painting. The modern exhibition took the ancient painting and enlarged it by 30 times so visitors could get a clear look at every detail. There were also several small exhibition halls that recreated scenes from the painting for visitors to walk around and get a better idea about the culture of the Northern Song Dynasty through a smart phone app they could download onto their phones. As visitors moved through the 1,600-square-meter hall, they were able to listen to detailed professional introductions to the exhibit through the app. These innovative expressions of traditional culture have helped deepen people's understanding of China's history and culture. After the 2019 Spring Festival, the National Cultural Heritage Administration launched new regulations aimed at further developing museums in China, which means these institutions are about to embark on a new journey to transform into an essential part of people's daily lives.