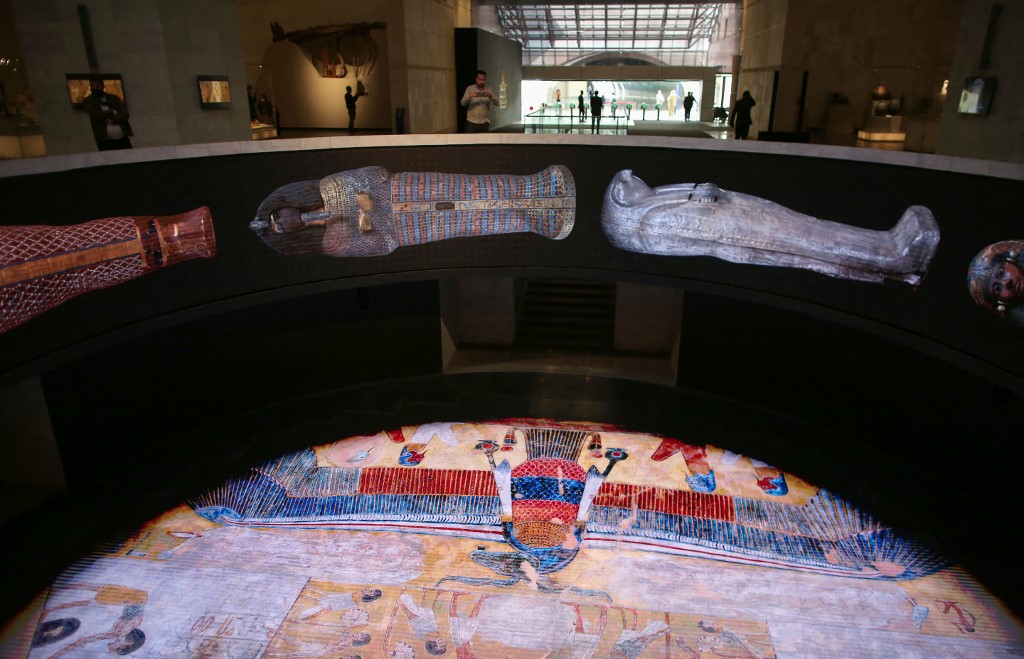 People take pictures of a dispaly at Egypt's new National Museum of Egyptian Civilisation (NMEC), in the Fustat district of Old Cairo, during its official reopening a day after the Pharaohs' Golden Parade ceremony, on April 4, 2021. The NMEC which opened its doors to limited exhibits from 2017, opens fully a day after the "Pharaohs' Golden Parade", but the mummies go on display to the general public two weeks later. (Photo: AFP)

CAIRO, April 4 (Xinhua) -- In a magnificent building with a pyramid structure resting on four columns on top, and with a vast yard overlooking a natural lake, the newly-opened National Museum of Egyptian Civilization (NMEC) in Cairo highlight the Egyptian civilization from the Predynastic period to the modern age.

Passing through the main door, visitors encounter a tube-like shiny hallway leading to the main premises that includes the Main Exhibition Hall, whose entrance has a downward stairway leading to the Royal Mummies Hall located underneath.

Both halls were inaugurated Saturday evening by Egypt's President Abdel-Fattah al-Sisi, following a majestic festive parade celebrating the relocation of 22 royal mummies of 18 ancient Egyptian kings and four queens from the Egyptian Museum in Tahrir Square in downtown Cairo to the NMEC in Al-Fustat neighborhood a few kilometers away.

Ahmed Ghoneim, executive director of the NMEC, described the museum as "a lighthouse for culture and tourism in Egypt, the Arab world and Africa."

Ghoneim pointed out that the size of the main hall is about 2,000 square meters, while the total area of the museum is approximately 33 feddans (some 138,600 square meters).

"We have now 65,000 artifacts but our warehouses can accommodate 100,000 artifacts. Of them, about 1,600 artifacts are displayed here in the Main Exhibition Hall," the director told Xinhua inside the museum.

The main hall showcases artifacts from the prehistoric times, the Pharaonic dynasties, the Islamic and Coptic eras until the modern-day Egypt.

Besides Pharaonic statues and objects, the main hall hosts a human skeleton dating back 35,000 years, the oldest artificial limb in history, which shows how ancient Egyptians advanced in medicine, according to the museum's executive director.

The royal mummies that were moved to the NMEC belonged to kings and queens of the 17th, 18th, 19th and 20th dynasties, dating back some 3,000 years, including the mummies of famous ancient Egyptian King Ramses II and Queen Hatshepsut.

The mummies hall will be opened on April 18 to coincide with the International Day for Monuments and Sites, also known as World Heritage Day.

"The Royal Mummies Hall will exhibit about 150 pieces, including the mummies as well as their coffins. For the first time, each mummy will be exhibited near the coffin where it was found," Sayed Abu el-Fadl, supervisor of the main hall and the mummies hall, explained.

With joint efforts of the UNESCO and the Egyptian government, the NMEC's foundation stone was laid in 2002 and its temporary exhibition hall was opened in 2017.

The Ministry of Tourism and Antiquities said that at least 800 NMEC tickets were sold on Sunday, the first day of opening the main hall of the museum to visitors.

Walid Ahmed, an Egyptian civil engineer who was taking a tour inside the main hall, described the architecture and the design of the museum's interior and exterior as "super." "I didn't think it will look that impressive!"

"I am happy with the design, the method of exhibition and the technologies used. I believe it will be such an important attraction in Cairo," he added.

As for Laetitia Saunier, a Swiss young woman, she said that she decided to visit the museum after she watched the remarkable Pharaohs' Golden Parade that escorted the 22 mummies during their transfer to the NMEC.

"The museum is really amazing," the Swiss tourist told Xinhua. "All the stories of Egypt are amazing but the mummies attract me the most."