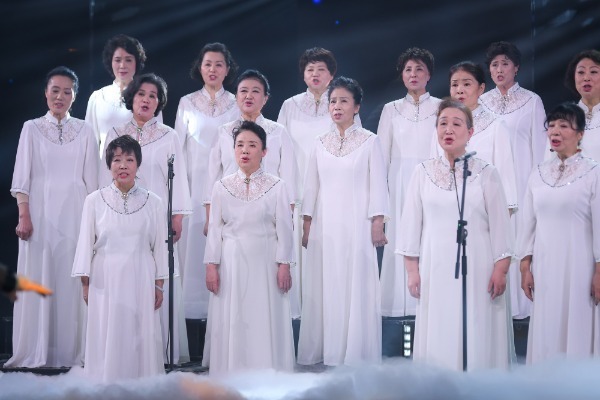 By the end of 2019, China had 250 million people aged 60 or older, accounting for more than 18 percent of the country's total population, according to the National Bureau of Statistics.

When television anchor Huang Wei read these figures, she came to the surprising realization that one in six Chinese is a senior citizen.

"With people living longer than ever, the elderly population is rapidly growing year by year. Yet, such a huge group is hardly the focus or talk of the nation," says Huang.

With a desire to give the elderly a platform, Huang has produced Leling Changxiang ("singing happily and loudly at an old age"), an eight-episode program that has selected 32 choruses consisting of around 2,000 elderly singers to perform on China Central Television's stage.

Also a national singing contest for the participants, the show has aired on CCTV-1 and CCTV-12 since late June, with an episode being released every Sunday. The program combines stage performances with interview footage.

Huang, also serving as the host of the new program, says she shaped a clear idea for the show after reading an article which listed the top 10 best exercises for health.

"In the past, I thought gentle physical sports such as tai chi would be the most popular and useful exercise for the elderly to keep healthy. However, the article writes, rather surprisingly, that singing is the most useful, as it can make the elderly happy, helping to extend their life span," says Huang.

As American activist and journalist Betty Friedan once said, "Aging is not lost youth but a new stage of opportunity and strength." Beijing Tongxin Choir, the first group to perform onstage in the first episode, proves they can be quick and vibrant learners.

Although most of them only studied Russian at a younger age, they chose to perform the English song, You Raise Me Up, originally composed by the Norwegian-Irish duo Secret Garden. They sang the song fluently with a perfect accent.

"Few of us had learned English before. That is a shortcoming, but can also become an advantage. We had a teacher, and we studied very attentively, starting from square one," explains one chorister during an interview on the show.

Most members of Beijing Tongxin Choir were members of the China National Radio Children's Choir in the 1950s, when they were 7 or 8 years old.

As the first children's choir founded in New China, the group brought nationwide popularity to a series of classic songs, including Let's Paddle and Learn from Our Role Model, Lei Feng.

Aside from those seeking inspiration from Western music, some choirs have won plaudits for performing revolutionary classics, which have stirred patriotism across generations of Chinese viewers.

The Veterans' Choir, with most of its members previously serving in the military in some capacity, returned to the stage to perform Suite of Songs for the Long March, a 10-piece vocal music divertimento to mark the Red Army's epic retreat that took place between 1934 and 1936, a turning point in Communist Party of China's revolutionary history.

Highlighted contestants also include retired professors from Communication University of China, scientists from the Chinese Academy of Sciences, and a group of charity workers from Xinjiang Uygur autonomous region.

"We wish to build a stage especially for the elderly to pursue their musical dream," says Huang.

In her 50s, Huang has hosted the enduring television program Sunset Glow－a show tailored for the seniors that was created by the State broadcaster CCTV since 1993－for more than two decades. She's also famous for playing Deng Yingchao, the wife of late premier Zhou Enlai, in several TV productions thanks to her similar appearance.

With a profound knowledge of the seniors, she says the production team has cared for the elderly in various aspects, such as slowing down the speed at which they talk, while conversing with the participants, and arranging medical staff and emergency vehicles to be available 24 hours a day.

"In the past, most old people believed that their adult children would be their main source of support in their later years. Now more seniors have changed their minds, believing they should rely more on themselves. To sing with friends can help them realize such a goal," Huang says.