Washington (People's Daily) -- The Embassy of the People’s Republic of China and the Smithsonian’s National Zoo and Conservation Biology Institute hosted a housewarming party on Feb.23, to celebrate the opening of a new exhibit inside the zoo’s giant panda house.

“Giant pandas are also symbolic of China-US friendship,” said Embassy Minister Xu Xueyuan during the official opening. “The pandas are not only beneficiaries of the China-US relationship, but are also symbols of win-win exchanges and cooperation between the two countries.”

It’s not only a significant boost to the development of China’s rare animal conservation, but the pandas have also become the most popular envoys of friendship, bringing laughter and joy to millions of Americans.

“This year marks the 40th anniversary of the establishment of diplomatic relations between China and the United States,” Xu continued. “Looking to the future, we believe that cooperation is the best way to develop China-US relations, which we must cherish and protect, just as we jointly do for the giant pandas.

“We will work together to maintain and expand our common interests in the years to come, and will promote relations based on coordination, cooperation and stability to better benefit our two peoples, as well as the world at large.” 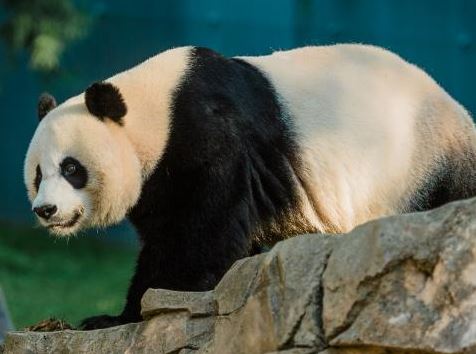 The new interactive exhibit inside the panda house teaches visitors about the ecology, reproduction, conservation and care of giant pandas. Through a series of games and activities, visitors will learn about the pandas and their natural habitat.

Visitors can navigate the effects of habitat loss in bamboo forests from the perspective of a giant panda spinning and whirling maze game. Trivia buffs and future scientists can test their knowledge of species that share panda habitats through a digital matching game that uses real camera trap photos.

“So much has changed for giant pandas, for the better, in the past decade,” said Steven Monfort, Director of John and Adrienne Mars, Smithsonian’s National Zoo and Conservation Biology Institute.

“This updated exhibit is really inspiring because it shows how much of a difference we can make with science and cooperation. Smithsonian and Chinese scientists have been collaborating for decades and visitors can see the results of our work as they walk through the panda house.”

Fun and surprising facts about pandas are peppered throughout the exhibit. New photos and videos give visitors a behind-the-scenes glimpse of life at the zoo’s panda habitat. Videos show how the pandas are trained to cooperate for veterinary checks, and how they are kept active and stimulated. The exhibit also chronicles advances made by panda scientists in China and at the Smithsonian in the past four decades.

Visitors to the David M. Rubenstein Family Giant Panda Habitat housewarming party enjoyed special activities, while the giant pandas and red pandas were given treats, specially made by the zoo's nutrition department to look like noodle bowls.

The zoo gave visitors a special commemorative limited edition print. It is a reproduction of an original painting created by the Zoo's giant pandas Tian Tian, Mei Xiang, and Bei Bei.