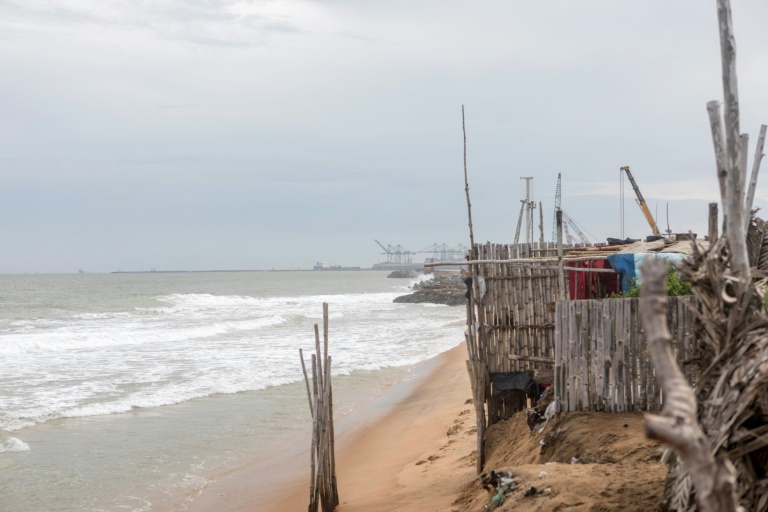 In the beachfront village of Agebkope on Togo's shore, houses have been swept into the sea and others teeter on the brink as coastal erosion worsens (Photo: AFP)

The fishing village of Agbekope and other seaside communities along Togo's coast have long lived with the consequences of erosion from the strong winds and waves of the Atlantic Ocean.

"Several multiple-storey houses have already collapsed and our cemetery has been affected as well," said village chief Jean-Dolayi Duevi.

"We have had to exhume 47 bodies and move them to the cemetery in Baguida" near the capital, Lome, he told AFP.

Erosion affects coastal communities around the world but is becoming a major environmental and social problem in Togo, where some 22,000 people rely on fishing to make a living.

Relentless wind and wave action is washing away between five to 10 metres (16 to 32 feet) of shoreline every year, according to Togo's environment ministry.

But in some places, it is eating into the coast by up to 25 metres.

Houses have been swept into the sea and others teeter on the brink, affecting most of the tiny country's 56 kilometres (35 miles) of coastline, some estimates suggest.

Rising tides as a result of climate change as well as human activity are blamed for the problem.

In Agbekope, locals blame the damage on the construction and expansion of the deep sea port in Lome since the late 1960s.

Others point the finger at a new nearby fishing port that has been under construction since April last year.

The new port is expected to open in February and has been mostly funded by 14.4 billion CFA francs ($25 million/22 million euros) from Japan's overseas development agency.

The 178 fishing boats using the dilapidated and overcrowded existing port will operate from the new berths, allowing them to prepare for trips, land catches and to moor more safely.

It will also accommodate 300 or so people who are involved in fish product distribution.

But fishing communities fear the new port could also harm those it is supposed to help, by increasing erosion and forcing residents to move inland.

"The building site of the new fishing port that is right next to our village frightens us," said Ben Vonor, 57, who lives in Agbekope.

"The sea was advancing before as well but much slower. Since they started putting stones everywhere, it is progressing much faster and changes can be seen daily."

Tchannibi Bakatimbe, a project manager at Togo's environment ministry, said expansion of the deepwater port in recent years has disrupted the accumulation of sediment.

The direction of water currents has changed and sand is prevented from being deposited. Instead, sediment on the beach is taken away.

Local residents also contribute to coastal erosion by collecting sand and gravel to build houses as a source of income.

There was no immediate comment from the authorities at the main port, which handles the bulk of Togo's international trade and is a transit hub for landlocked neighbouring countries.

Agbekope chief Duevi is also the coordinator for the village development committee, which has represented several seafront communities since 2016.

The body now wants the government to take steps to relocate entire villages inland and pay them compensation for the loss of their livelihoods.

Some villagers -- mistrustful of the government after being let down by false promises in the past -- are wary of getting a response in time and are making their own arrangements.

Jeremy Assogbe, a 62-year-old security guard, said: "This is the third time that I will have to move. I have been on the coast for at least 10 years...

"I will no longer stay on the coast this time because I have suffered too much here. It is too tough here."

Others are more optimistic, hoping that once in use, the new port will allow them to catch more fish. But even then there are dangers.

Fishing banks could be pushed back into the ocean, forcing fishermen to venture further from the shore, leaving them and their small wooden boats at the mercy of the powerful waves.