The COVID-19 pandemic has altered many aspects of daily life in Singapore, and this year's celebration of the Chinese Lunar New Year was no exception. 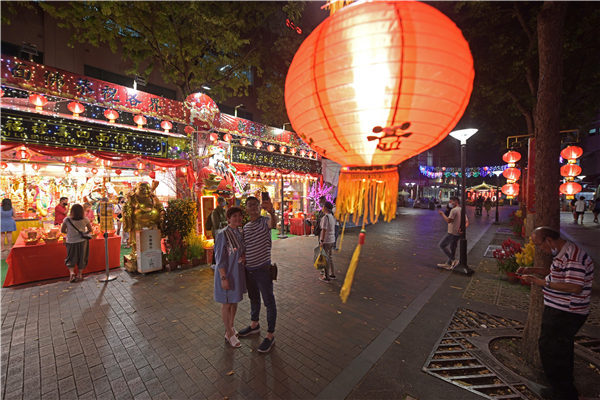 Two people take a selfie on a street decorated with red lanterns for Spring Festival in Singapore on Feb 11. [Photo/Xinhua]

The Chinese Lunar New Year is undoubtedly one of the most important festivals in Singapore, with about 74 percent of its citizens and Permanent Residents being people of Chinese origin. With concerns that the local cases of infection would rise in wake of the usual family reunions and celebratory activities with friends during the festive season, the government rolled out a number of restrictive measures. Consequently, the arrival of the Year of the Ox was marked in a somewhat different fashion.

Li and his wife, who is a math teacher at a middle school, used to spend the Chinese Lunar New Year holidays by hosting his wife's parents and relatives at their house before visiting the homes of the relatives later on. The party would begin at 11 am and last until 3 pm local time to cater to the guests, he says.

Due to the government's imposition that each household could only receive eight visitors per day and each person can only visit two other households a day, the couple decided that, this year, they would not invite the wife's relatives over for lunch and would not head out to visit the houses of relatives either.

For those who did gather together, things were not exactly the same.

For the Chinese Lunar New Year feast in Singapore, the most important dish is definitely yusheng, a Cantonese-style raw fish salad, which is a symbol of abundance and prosperity. Diners use chopsticks to toss the yusheng together while calling out auspicious phrases.

To limit the potential spread of the virus through airborne particles, the government advised the public to avoid the shouting of auspicious phrases when engaging in the practice this year.

Instead of just performing the yusheng ritual in silence, Aaron Yang, the founder of a consulting company, employed technology in the form of prerecorded blessings. This way, he could still perform the traditional culinary ritual while meeting the government's recommendation.

Gan Mi, a mother of two children, has enjoyed a local getaway with her family during the Chinese New Year holiday. In order to feed their need to travel while being unable to go abroad due to global restrictions, she and her children spent the holiday at the city's iconic Marina Bay Sands hotel.

By playing in the rooftop infinity pool and gazing down on the glittering expanse of the city, followed by a shopping spree at the mall inside the hotel, they had a wonderful time there.

To attract local guests, the hotels offered discounts and packages for lovers, families and for those fighting the virus on front line. They also provided activities, such as setting up a tent in the hotel rooms for kids to explore, welcoming pets to the hotel or giving away complimentary tickets to tourist attractions.

In addition to hotel stays, local residents also got away by boarding cruise ships.

Local media Lianhe Zaobao reported that two cruise ships set sail from Singapore on Feb 11 and 12, taking thousands on an ocean voyage and a fireworks show.

Some have even patronized the ships more than once in recent months.

The ships set sail from Singapore and will not dock at any other destinations and all guests must undergo a mandatory COVID-19 test before embarking, but none of this has dampened the holiday-goers' enthusiasm.

While lantern displays are an important part of the New Year celebrations, the Chinatown lantern display was switched off on the eve of the Chinese Lunar New Year to avoid overcrowding. For visitors who want to appreciate the 24 lanterns shown at the Gardens by the Bay, they have to register first and visits are limited to just 2,000 people per time slot. They also need to undergo temperature screening and maintain social distancing while visiting.

By Feb 15, Singapore had reported no community COVID-19 cases for five consecutive days, with the total cases amounting to 59,809.