CULTURE NFL At 100: League is all in on the action of sports betting

NFL At 100: League is all in on the action of sports betting 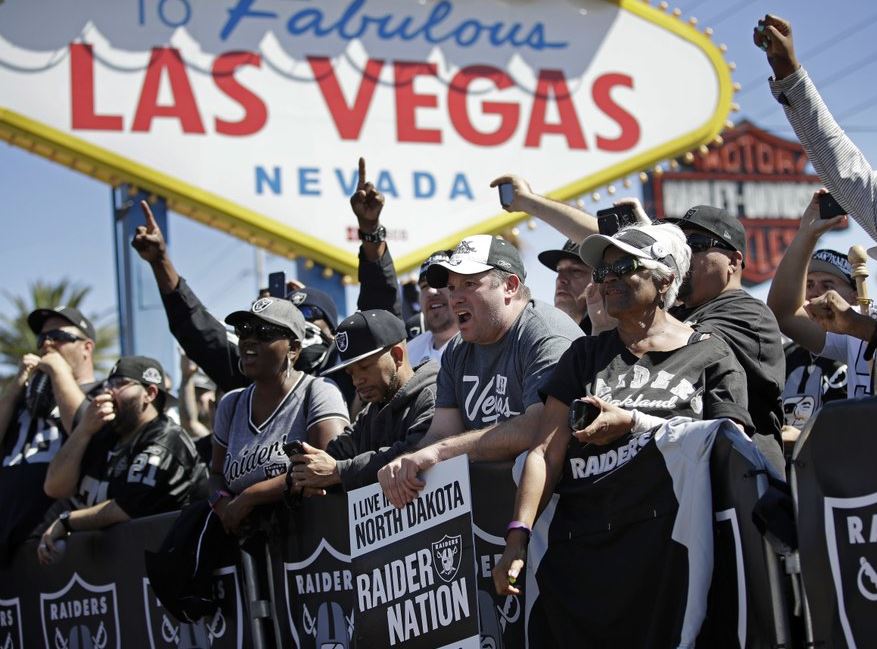 Fans cheer as the Oakland Raiders announce their fourth round draft pick during an NFL football draft event in Las Vegas in June 2017. (File photo: AP)

When Roxy Roxborough set the lines for the big Las Vegas sports books in the ’80s and ’90s, he was also working behind the scenes to help the head of the NFL’s security team keep a close eye on point spreads that moved suddenly for suspicious reasons.

He remembers a few, like when Dan Marino was supposedly injured in a motorcycle accident the day before the Dolphins played the Bills. Or when some bettors thought they had the inside scoop that Cleveland quarterback Bernie Kosar would miss a game because it fell on a big Jewish holiday.

Turns out there was no motorcycle accident. And Kosar was not only playing but wasn’t even Jewish.

The rumors were always plentiful — as they usually are in the insular world of sports betting — but also easy to debunk. One thing was constant, though, in Roxborough’s two decades as a major figure in the Las Vegas sports betting scene.

There was never any evidence anyone was trying to fix NFL games.

“We never saw anything,” Roxborough said. “Not only that but if you go back in time, I’d say this is least corrupted league in the history of American sports.”

Indeed, the NFL has been remarkably free of betting scandals as it celebrates its 100th season, despite a few hiccups in earlier days. Whether through good fortune, extreme vigilance or even the help of legal bookies in Las Vegas, there hasn’t been a legitimate documented attempt to fix an NFL game in the modern era.

That doesn’t mean the league hasn’t play scared over the years. The NFL was so petrified of being associated with gambling or sports betting that up until recently players were forbidden to go into casinos, and anything associated with Las Vegas was suspect.

Longtime CBS broadcaster Brent Musburger remembers having to have a sit down with then-commissioner Pete Rozelle in the mid-1970s just to get approval for oddsmaker Jimmy “The Greek” Snyder to appear on the network’s pregame shows — with permission granted only after promising not to mention certain point spread numbers.

“Rozelle said, OK, but I’m going to ask you don’t use threes, sevens and tens,” Musburger recalled. “Because those were the key numbers on most spreads and how people measured the spread.”

Hard to imagine now, but as recently as 15 years ago the NFL rejected Super Bowl advertising from Las Vegas tourism officials. As late as four years ago it forced organizers of a fantasy football convention in the gambling city to cancel their show because Dallas Cowboys quarterback Tony Romo was going to be a featured guest.

The league also fought legalized sports betting in court, and commissioner Roger Goodell said in a 2012 deposition that gambling was “No. 1 on my list” when asked about threats to the NFL.

Contrast that to today when the league is partnering with Caesars Palace on sports betting marketing, and teams are working with other casinos for sponsorships. The Raiders will begin play in a new $1.9 billion stadium just off the Las Vegas Strip next year, and anyone with an account and an app will be able to make a bet as they watch the game.

And just to show the new romance between bettors and the league is blossoming fully, the NFL will hold its draft in Las Vegas in May. Expect a Super Bowl to follow sometime in the future.

As sports betting spreads across the country, the NFL is all in on a business it long considered its biggest threat. And those in an industry that has long labored under a stigma are left wondering: What took so long?

“I believed when working with them that they really thought sports betting would corrupt their sport,” Roxborough said. “A lot of people say they’re hypocrites now but deep down I believe they thought wide-open gambling would be detrimental to the league.”

Ironic, perhaps, because some of the league’s early movers and shakers were involved in gambling in various ways. Among them was Tim Mara, an established bookmaker in New York when he purchased the Giants in 1925.

But the fear was always that the public wouldn’t believe the games were legitimate if there was any hint of scandal. That’s why Paul Hornung and Alex Karras were suspended for a year in 1963 for betting a few hundred dollars on games other teams were playing. It’s why Joe Namath was forced to sell his New York nightclub in 1969 after NFL investigators determined illegal bookies were hanging out there.

Now, sports betting is legal and operating in 11 states, and NFL teams are not only welcoming deals with sports betting companies but promoting their own prediction contests that are based on sports betting principles but are offered — for now at least — for free.

All without even a tacit acknowledgement that point spreads — and sports betting — played a big part in making the league what it is today.

“This league would not be No. 1 without the point spread,” Musburger said. “It helped fuel the league. Not just the spreads but the pools where people could pick winners only. People love to predict the future.”

The future — at least when it comes to sports betting — may just fuel a second boom in the NFL’s popularity. New Jersey has already surpassed Nevada in monthly betting totals, and $1.8 billion of the $5 billion wagered in Nevada last year was on football.

Just what the betting ceiling will be is hard to forecast. There seems to be massive pent-up demand in the wake of last year’s Supreme Court decision allowing states to legalize sports betting, and a survey released by the American Gaming Association on the eve of the 2019 NFL season indicated 38 million people planned to place a wager on an NFL game this year.

There will be plenty of winners and losers, but the big winner is a league that had to be drawn kicking and screaming into the new world of sports betting. The NFL will profit not only from various deals with its new sports betting partners, but should also benefit from increased viewership.

Cowboys owner Jerry Jones believes that benefit will be huge. Jones told Yahoo Finance recently that people will not only watch longer but watch more often, something that will pay off as the league renews television contracts.

“Gaming is going to make a big difference,” Jones said. “I dare say gaming will increase the value of television. I dare say it will go up 50 percent because of the gaming concentration.”

It’s a far cry from when Musburger would slip in a reference to the Super Bowl point spread after the NFC championship game each year, then wait for the repercussions.

“I always thought people wanted an actual number and I didn’t screw around,” Musburger said. “I knew I would get a call from the CBS front office complaining about it and I’d always say damn, I forgot. Then I’d do it all over again the next year.”

No need for that today when entire shows are devoted to gambling lines and ESPN’s SportsCenter is often led at night with bad beats. Musburger himself now is managing editor and lead host for the Vegas Stats & Information network, which offers betting news and analytics and a full channel of sports betting talk on Sirius XM.

Roxborough, meanwhile, is on the other side of the counter watching the business evolve in a way that would have been head scratching to the bookies during the day.

A business once restricted to people traveling to Las Vegas and handing $100 bills over the counter to a ticket writer is now available to millions and growing fast. With mobile apps people can bet from their living rooms, offices or the local sandwich shop. When the Raiders open play in Las Vegas next year, fans will be able to sit in the stands and bet on their phones.

“I always thought the big move in betting was around the corner and I was wrong,” Roxborough said. “I didn’t think it would take this long, but people with monopolies aren’t visionaries and Nevada had a 50-year monopoly on sports betting that it doesn’t have now. It’s a whole new world.”