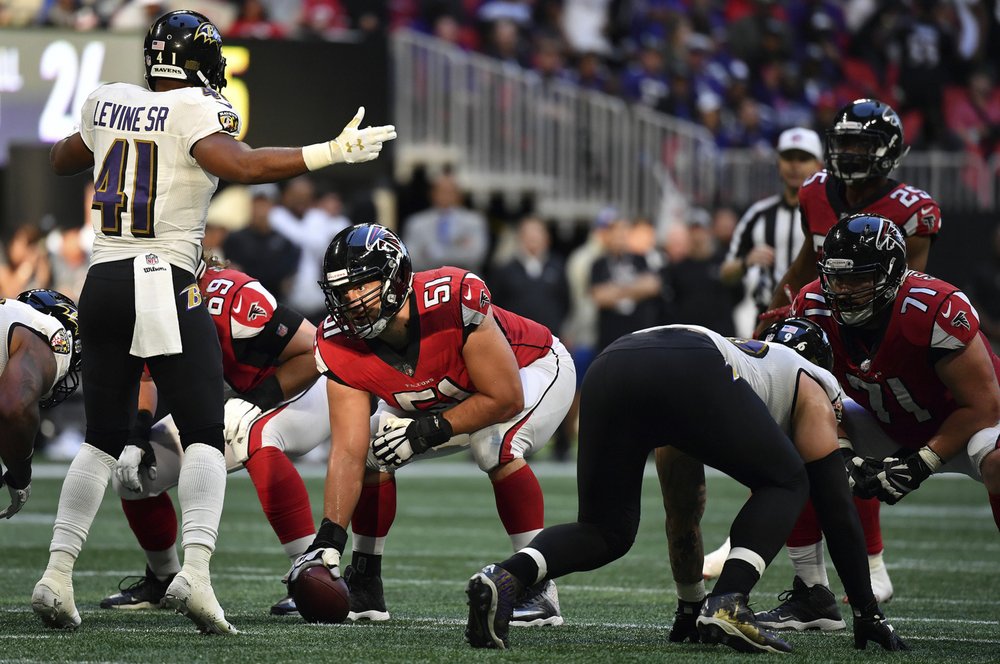 In this Dec. 2, 2018, file photo, Atlanta Falcons center Alex Mack (51) prepares to work against the Baltimore Ravens during the second half of an NFL football game in Atlanta. (File photo: AP)

Pro Bowl center Alex Mack rattled off all he does before the snap: Checks for blitzes, keeps an eye on the play clock, makes blocking adjustments and communicates all the changes to everyone else.

All that happens in seconds — with 300-pound defenders a few inches away and ready to pounce.

“It’s unlike anything else in football,” the Atlanta Falcons standout said.

Some might argue the center is the most indispensable player on the roster — the player who mans the only position guaranteed to touch the ball on every play. He calls the shots for the offensive line and begins each play.

But an Associated Press analysis revealed that despite their unique skill set, it was centers — not running backs, linebackers or defensive backs — who were becoming more endangered more quickly than players at any other position . In 2009, the average center had six years in the league. This season, the average center had four years of experience.

“Really? That’s shocking,” Mack said. “I guess, technically, it’s the last spot for the O-line. If you’re a tackle who can’t play in space, they move you to guard. If you’re a guard that’s having trouble, they move you to center. Oftentimes center is the position that can get the most help. A lot of the blocks are double-teams, so you’re not put on an island nearly as much, so it’s always a position that you can try to improve.”

Most teams have in recent years, too.

Thirty-eight centers have been drafted over the last five years, and none of them has made a Pro Bowl. Sixteen of those have been taken in the first three rounds of the NFL draft.

It helps explain why the experience of the average center has fallen. While every position outside of quarterback, kicker and punter has seen a decline, no position sees this sharp a drop-off in the AP survey.

“It’s one of those tough, nasty, gritty positions that you have to just keep fighting at, and kids nowadays just aren’t quite the same,” said retired NFL center Brad Meester, a 14-year starter for the Jacksonville Jaguars. “Even at the high school level, those kids are getting harder and harder to find anymore.

“They’re just not the same as they were years ago. I don’t know if that’s been part of the reason play has gone down and we’re seeing this dip in longevity, but it could be.”

Since centers are typically the smallest offensive linemen in college, Mack and Meester believe some undersized guys have trouble making the NFL jump — especially with defensive linemen getting bigger, faster and stronger each year.

“In college, if you have a guy who’s big enough to play in the NFL, he’s probably playing tackle or guard,” Meester said. “He might get moved to center at the next level, and then you end up with centers that are a little raw going into the NFL.”

That’s exactly what happened to Chicago Bears Pro Bowl center Cody Whitehair, who started his college career as a guard and moved to left tackle as a senior at Kansas State. The Bears drafted him in the second round in 2016 and then moved him to center a week before his rookie year.

“It’s hard to transition into the NFL,” Whitehair said. “It definitely takes a special breed to come in out of college and be ready to start on the offensive line, especially at center.”

Still, Whitehair was surprised to learn that the longevity of centers isn’t what is used to be. He said it could be that centers are asked to do so much more in the NFL than in college, where more prevalent spread systems often take their cues from the sideline inside of adjusting on the fly.

But Whitehair pointed to Mack (10th season), New Orleans’ Max Unger (10th), Philadelphia’s Jason Kelce (8th) and the Pouncey twins (8th and 7th, respectively) as long-term starters he thought would be enough to make a difference in the changing landscape.

“We just got to get the younger generation to follow in those footsteps,” Whitehair said.

For every success story such as Whitehair, it seems there’s a recently drafted center who’s already out of the league — guys like David Molk, Philip Blake, Peter Konz, Khaled Holmes, Bryan Stork and Hroniss Grasu to name a few.

“A center really is your quarterback of the offensive line, the guy who right along with the quarterback is reading defenses, reading stunts, blitzes, secondaries,” Meester said. “If you get a guy in there that can do that, you keep him.”