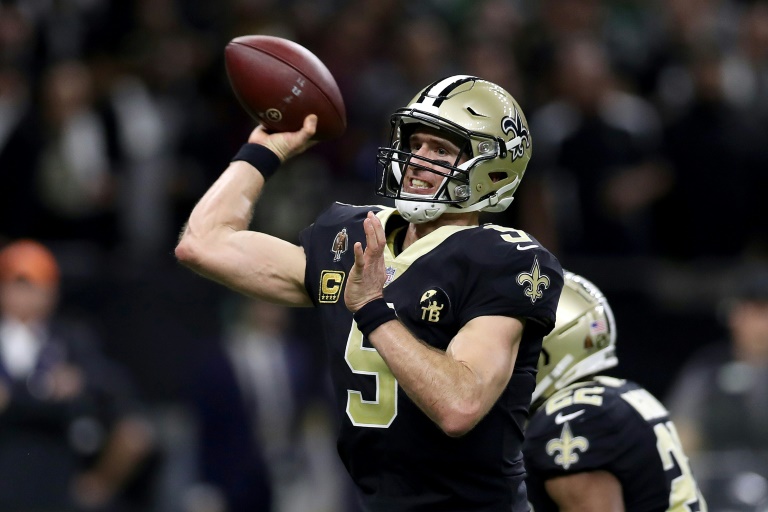 Two days before his 40th birthday, Brees overcame a first-pass pickoff to complete 28 of 38 throws for 301 yards and two touchdowns as the Saints went marching into next Sunday's National Conference final by beating defending champion Philadelphia 20-14.

Brady, a 41-year-old winner of five NFL titles, completed 34 of 44 passes for 343 yards and a touchdown while Sony Michel ran 24 times for 129 yards and three touchdowns as the Patriots beat the Los Angeles Chargers 41-28 for a record eighth consecutive trip to the American Conference final.

The Saints will host the Los Angeles Rams and the Patriots will visit the Kansas City Chiefs next Sunday to decide berths in Super Bowl 53 on February 3 at Atlanta.

Brees sparked the greatest playoff comeback in Saints history from a 14-0 deficit.

"Obviously we didn't start this game the way we wanted to," Brees said. "They jumped out to a 14-point lead. We were calm, we were poised, we knew were going to get things going."

The Patriots, who seek a ninth Super Bowl appearance in 18 campaigns and third title in five seasons, jumped ahead 35-7 at half-time.

"The line played great and I think we just did a good job of keeping them off balance. It was a good win," Brady said. "It's that time of year. You've got to play your best."

The Patriots beat Kansas City 43-40 in an October regular-season contest, but the Chiefs, who haven't won a title since the 1969 campaign, were the only visitors all season to lead at New England.

"Kansas City has had a hell of a year," Brady said. "They gave us everything we could handle in October. I'm sure it will be the same. It's going to be fun to play them in the championship game."

The Rams and Saints each went an NFL-best 13-3 this season, with New Orleans beating the Rams 45-35 in November.

The Saints blasted Philadelphia 48-7 in a November meeting, but the Eagles' Cre'Von LeBlanc intercepted Brees's first pass to set up a 37-yard Nick Foles touchdown toss to Jordan Matthews. Foles followed with a 1-yard touchdown run later in the first quarter.

New Orleans answered with a 12-play, 79-yard touchdown drive sustained by a Taysom Hill fake punt run and capped by a 2-yard Brees touchdown pass to rookie Keith Kirkwood. Will Lutz's 45-yard field goal made it 14-10 at half-time.

The Saints made a season-longest 18-play, 92-yard touchdown march that took 11:29 of the third quarter and ended with a 2-yard Brees touchdown pass to Michael Thomas and Lutz added a 39-yard field goal.

Lutz missed from 52 yards with 2:58 remaining and the Eagles drove into Saints territory but a Foles pass deflected off the hands of Alshon Jeffery and into those of Saints defender Marshon Lattimore for an interception and New Orleans ran out the clock.

The Chargers, previously 9-0 on the road, were humbled by a Patriots team that went 9-0 at home this season.

Chargers quarterback Philip Rivers fell to 0-8 all-time against Brady and 1-5 in games played in sub-freezing cold.

The Patriots dominated from the start, scoring touchdowns on their opening four possessions for the first time in club playoff history.

Michel scored on a 1-yard run to cap an 83-yard opening march and, after Rivers answered with a 43-yard touchdown pass to Keenan Allen, added a 14-yard touchdown run.

Brady connected with Phillip Dorsett on a 15-yard touchdown toss 2:43 into the second quarter, his 13th consecutive playoff game with a TD pass, and Rex Burkhead followed with a 6-yard touchdown run.

After New England was finally forced to punt, LA's Desmond King fumbled the catch and Albert McClellan recovered for the Patriots, setting up Michel's 5-yard touchdown run for a 35-7 half-time lead.

The Chargers added too-late touchdowns on a 1-yard Melvin Gordon run and Rivers passes of one yard to Virgil Green and eight to Antonio Gates.