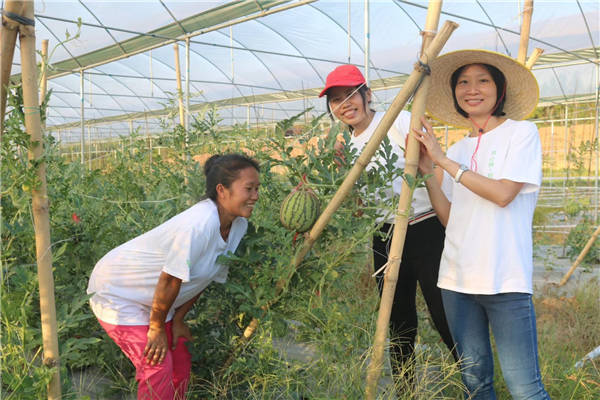 They are often a neglected group when it comes to gender equality, female empowerment and many rural women, mostly between 45 to 60, are not well-educated.

Zou Weiquan is determined to help them discover themselves and promote their development.

While men and young women left the countryside and migrated to work in urban economies, older women remained in villages to take care of the households and work on the land.

Zou has been researching and empowering women in rural areas by carrying out various programs under a non-governmental organization for seven years.

"Sexual discrimination is a traditional issue rooted in history and culture, which cannot be easily changed", said Zou, who obtained a doctoral degree in anthropology and has worked for the Rural Women Development Foundation of Guangdong province since 2013.

She added that the situation is more pervasive and severe in rural areas as women there may not even realize that they are treated unequally.

Women who remain behind are a marginalized and vulnerable group, but they can also be an important force for the development of the countryside, Zou said.

"So we hope to mobilize them to do more things that could benefit the development of the village. And when they engage in the process, their voice will increase, which will help them achieve self-development to promote gender equality in rural areas," she added.

Zou worked for three years in a village, Leming, in north Guangdong province. It is isolated due to poor transportation links, lacking adequate resources, special agricultural products and social networks, Zou said, adding that these are the areas where NGOs can play a vital role.

Through providing skill and technical training as well as financial support, Zou mobilized the "sisters "in the village to apply an ecological model for farming.

The foundation showed them how to process agricultural products and some women even began running a small restaurant for visitors, mostly hikers.

Zou also reckons that helping rural women is not just about finding them a way to make a living, but also attempting to satisfy their mental needs.

In addition to material support, the foundation also built online communities among the women for communication, teaching online courses on gender issues, and organized activities such as reading and writing.

The communities have gathered nearly 10,000 members.

The foundation also launched a project to encourage rural women to carry out public activities in their villages, including gender equality knowledge, child education, helping the elderly and environmental protection.

"Such programs not only raised their incomes and increased their voices at home, but also lead to healthier and more civically active lives for them", she said.

In a video revealing the life of three women in villages, the impression and stereotyping of the "rural female" was overhauled.

With the help of the NGO, they returned home from urban cities and started their own business in their hometowns, and even became inheritors of Intangible Cultural Heritage.

The video showed that women can have dreams and be themselves, saying that they are beautiful when they are confident.

Zou's interest in the group could be traced back to a survey she conducted for her doctoral dissertation which began in 2007. She researched the dilemma facing a group of women in a village.

Most of the women come from Guizhou province and the Guangxi Zhuang autonomous region and were trafficked to the village in Guangdong to get married there.

As a PhD candidate in anthropology at Sun Yat-sen University at that time, Zou spent five years with them and realized that the gender inequality and development problems facing rural women cannot be solved only through research papers.

"They believed I would not come back after finishing my dissertation as they thought their village was too poor for me to stay", she said.

"But I like to visit remote places and stay in rural areas, the slow pace of life there can give me enough time to think deeply and absorb more."

After her survey in the village, Zou was no longer satisfied in doing academic research, and decided to take action to help the marginalized group.

She joined the Rural Women Development Foundation of Guangdong in 2013 and become the only full-time member of staff at that time.

Her main idea is to help those women to identify the problems they are facing, discover their needs and then the foundation gives support to solve their problems and meet their needs through training, learning, and financial support as well as long-term company and supervision.

As of last year, the foundation has provided online services to 9,382 women in rural areas and various offline activity services covering 108 villages in 19 provinces and cities.

Some of their programs aim to cultivate key players in local communities, Zou said, adding that participation made them realize that they can do more and even help others.

"With the support of our project, they shared experience and communicate with other sisters in similar situations and participate in various kinds of learning and activities, which will boost their confidence."

Wu Xiulan is one of the key players in a local community.

Wu returned to her hometown and began to engage in ecologic breeding and planting.

In 2012 she set up an agricultural cooperative to help increase the income of 300 rural households in her village.

Knowing the Rural Women Development Foundation of Guangdong focuses on providing help to rural women in 2014, Wu registered a local social work center in her county in 2016 to help those in difficulties.

"I found that rural women lack understanding about the outside world, and most of them were left behind. I was poor and low-educated when I was young, but now I want to do something for them," she said.

Speaking of her impression about Zou, Wu said that "she is very tender-hearted, considerate, and she is capable of seeing and solving problems, and could also tolerate us."

"Only by uniting people can we improve the quality of rural vitalization," she said.

As there are more opportunities for the development for women now, Zou also admitted that gender inequality still lacks enough understanding and attention from society, and the situation in rural areas is a more marginalized issue.

There are very few NGOs working on affairs related to rural women, Zou said, adding that when they try to reach a donor, many of them would be confused about the difference between rural women development and poverty reduction and enriching cultural activities for women.

"It is a topic that is difficult to be paid attention to, and we have to do more to improve understanding and draw more attention from society and attract more volunteers to join us", she said.