CULTURE NHL set for fairy-tale final between Knights and Capitals

NHL set for fairy-tale final between Knights and Capitals 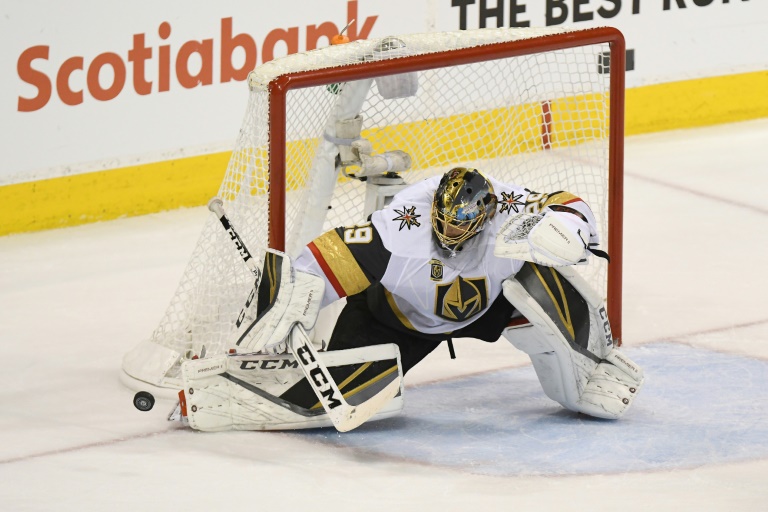 The Vegas Golden Knights, who didn't begin assembling talent until last June, made a stunning run to the best-of-seven final behind goaltender Marc-Andre Fleury (Photo: AFP)

The Vegas Golden Knights, who didn't begin assembling talent until last June, made a stunning run to the best-of-seven final behind goaltender Marc-Andre Fleury, who backstopped Pittsburgh to the trophy each of the past two years in part by ousting Washington.

"I thought I was done with them for a little bit," Fleury said. "I guess not."

The Knights would be the first debut team in major US sports history to win the title. Another first-year team, St. Louis, reached the NHL Final in 1968 but from an entire division of new clubs from which one had to make it.

"We're just a bunch of hockey players (that) wanted to find a home and we did," said Knights center Jonathan Marchessault, who has eight goals in 15 playoff games.

The Capitals have reached the final for only the second time in their 43-season history, 20 years after being swept by Detroit in 1998. They had never reached a conference final since until this month.

"We worked so hard for this to be able to be in the final," Capitals center Nicklas Backstrom said. "It's a great feeling, especially the way we did it. It was outstanding from everybody."

The Capitals trailed in every playoff series but battled back each time and now could become Washington's first major sport champion since the NFL Redskins won the 1992 Super Bowl.

Russia's Ovechkin, a seven-time goals leader in his 13 NHL seasons, marveled at 6,000 supporters cheering the Caps after a final practice Saturday before they departed for the opener in Vegas.

"It's huge. The town is all in. The town is excited," Capitals captain Ovechkin said. "The people get involved."

"It's awesome to see how into it they are, how much they care and how much they want to be a part of it," added Caps forward TJ Oshie.

The Capitals are 8-2 in road playoff games and led by 12 Ovechkin goals while Evgeny Kuznetsov has 11.

Both teams were assembled by Knights general manager George McPhee, who was the Capitals general manager from 1997 to 2014. He brought Ovechkin, Backstrom, goaltender Braden Holtby and 10 other current players to Washington before being fired in 2014, then joined the Vegas organization in 2016.

"It's a little special actually because of him," Backstrom said. "He was here for a long time and he drafted all of us. So it will be a great challenge. I can't wait for it."

Ovechkin, a left wing, led the NHL with 49 goals this season and brings a deadly slapshot and physical presence.

"His one-timer and his wrister, both of them are very tough, very fast and quick. It'll be a challenge," Fleury said of Ovechkin. "He brings the best out of me."

Holtby managed his first two of the season in must-win playoff games in the Eastern Conference final and hasn't surrendered a goal in nearly 160 minutes with 60 consecutive saves. He has a 12-6 playoff record with a 2.04 goals against average and .924 save percentage.

"Maybe in the past we've had more skill or been better on paper or whatever," Holtby said. "But this team, everyone knows their role and everyone wants to pitch in and everyone is comfortable with each other. I haven't been on a team like this where, in any situation, we're confident and confident in each other."

The Capitals are 8-2 in road playoff games and led by 12 Ovechkin goals while Evgeny Kuznetsov has 11.