In ancient China, no animal played a greater role than the horse. In people’s economic and social development, in warfare, the culture of dynasties and in everyday life, horses played a vital role. 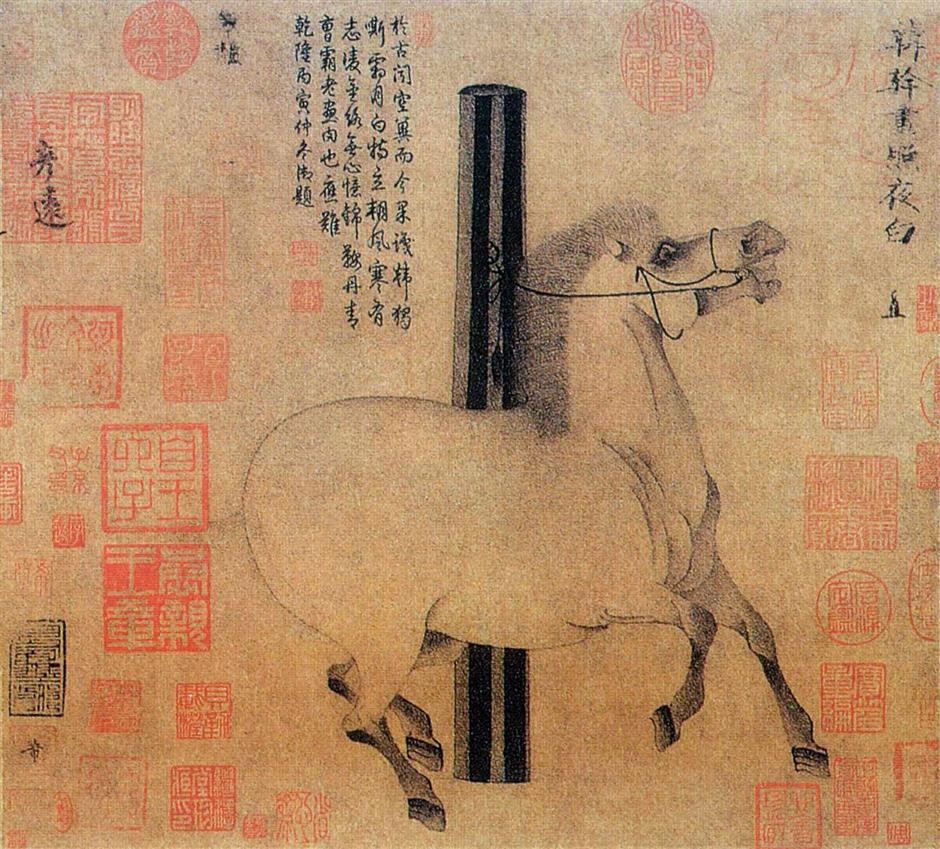 "Night-Shining White" features monochrome painting with ink shading. In the painting, the horse’s head is the most admired feature. The pricked ears, wild rolling eye, flaring nostril, the open mouth and the thick, bristle mane bring a fiery stallion to life. (Photos: Shine.cn)

Ancient Chinese even believed that some particularly “heavenly” steeds were in fact dragons in disguise, hence they were often referred to as “dragon horses.” 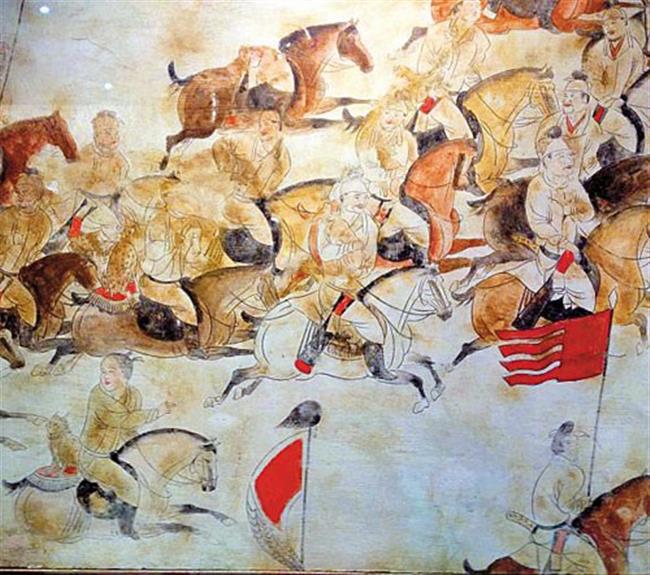 Equine painting was extremely popular during Tang Dynasty. This mural, which was found in a grave of a Tang prince, features hunting scene at that time.

So, naturally, the animal became a favorite subject in various forms of art, including traditional Chinese painting.

Ancient Chinese artists first drew images of horses on rocks or tomb walls, usually with simple linear outlines. However, during Tang Dynasty (AD 618-907) the equine painting became extremely popular and many new techniques were developed to paint this “celestial animal.”

This is largely due to the fact that during the prosperous years of Tang Dynasty, China greatly improved the quality of its horse population thanks both to advances in domestic breeding and the import of Arab and Central Asian horses.

Among the imported horses, the Akhal-Teke from Turkey and Turkmenistan were the favorites of noblemen and the imperial family, including the emperor himself. They were admired for their refined appearance, slender body and muscular legs.

As horses rose in value, painters were hired to depict the rare breeds. Among them, Han Gan (circa AD 706-783), a great artist of his time, was employed by Emperor Xuanzong (AD 695-762) to paint his horses. And Han’s profile of one of the emperor’s favorite chargers, by the name of Night-Shining White, later became not only a paradigm of Tang horse paintings, but also one of the most cherished gems of traditional Chinese painting.

Han was born into a poor family in Lantian in today’s Shaanxi Province in northwest China. As a boy, he eked out a living by helping out in a local wine shop.

However, he was extremely talented in drawing and painting. When Wang Wei (AD 699-761), one of the most famous painter-poets of Tang Dynasty, saw young Han draw figures in the sand with a stick, he was so impressed by the youngster’s gift that he decided to sponsor his study in painting.

Ten years later, Han was employed by Emperor Xuanzong to paint images of his prized horses in the imperial court.

Han is said to have paid frequent visits to the imperial stables and to have spent a lot of time there. He told others the live horses were his best teachers and he preferred observing the horses over the study of earlier paintings.

Still, his drawings and sketches of equestrian anatomy show a clear resemblance to ancient prototypes, such as horses drawn on rocks and tomb walls.

In the painting, the horse’s head is the most admired feature. The pricked ears, wild rolling eye, flaring nostril, the open mouth and the thick, bristle mane bring a fiery stallion to life.

Unlike their Western counterparts, ancient Chinese artists rarely resorted to the study of anatomy to familiarize themselves with the structure of animals or the human body. They purely relied on careful observation of their external appearance.

Therefore, the animals depicted in traditional Chinese painting are usually not as anatomically precise as those found in Western paintings.

However, Night-Shining White is among the most precise and most vivid depictions by a Chinese painter.

With more than two dozen seals and inscriptions on both the header and colophon of this ink on paper handscroll, it is widely accepted by experts as an original of Tang Dynasty.

Today, Night-Shining White, hailed by some as a national treasure of China, is housed in the Metropolitan Museum of Art in New York.