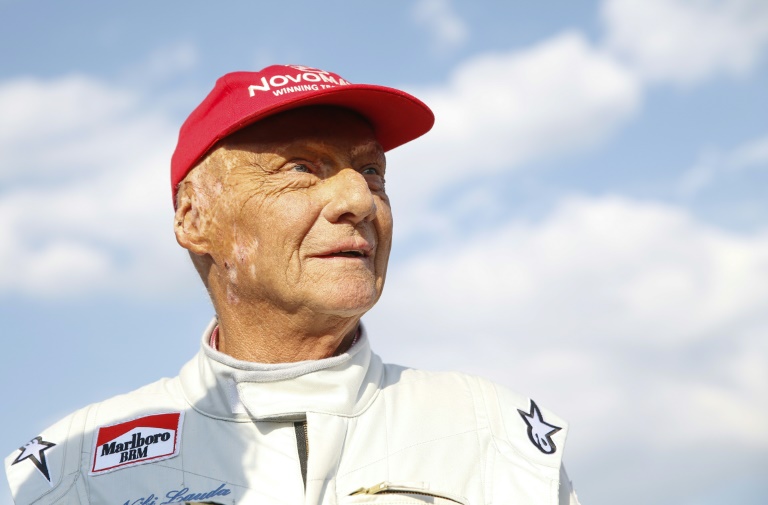 On fire in a burning race car cockpit: Formula One legend Niki Lauda will forever be known for his 1976 accident.

But that didn't stop the famous battler -- currently recovering from a lung transplant -- from winning a total of three world titles and later founding his own airlines.

Lauda, 69 and currently non-executive chairman of world champions Mercedes, underwent the operation Thursday at Vienna's general hospital following a lung infection he picked up while on holiday on Spain's Ibiza island.

"Everything is progressing very well at the moment, and we are very satisfied," Walter Klepetko, who operated on Lauda and leads the hospital's department for thoracic surgery, told Austria's ORF broadcaster.

Lauda won his first Formula One Grand Prix in 1975 with Ferrari, although it was on August 1 the following year that his life changed forever: the reigning world champion's racecar burst into flames on the Nuerburgring track in Germany.

He stayed in the burning vehicle for almost a minute before being pulled out.

Images of the accident of the defending champion went around the world -- but it was just the start of Lauda's legend.

Six weeks after receiving the last rites in his hospital bed, Lauda surprised everyone by taking part in the Italian Grand Prix in Monza.

He finished fourth while still in bandages after having suffered first- to third-degree burns over his face and hands and inhaled toxic fumes.

He had missed only two races but he was unable to resist a challenge from British racer James Hunt, who won four of the last seven races to overhaul Lauda and claim his only world title.

The rivalry between the two men -- which demonstrated the Austrian's extraordinary courage and fighting spirit -- was portrayed in the 2013 film "Rush" by American director Ron Howard.

In 1977, Lauda went on to win his second F1 world championship title with Ferrari and quit Formula One at the end of 1979.

But he came back in 1982, this time with McLaren, with whom he won his last world champion title in 1984.

Quitting as an F1 driver gave him more room to pursue his second passion, civil aviation, and in 1979 he founded Lauda Air, selling it at a profit to Austrian Airlines in 2002.

But that wasn't his last venture in the airline industry: in 2004, he created the profitable low cost carrier Niki that he sold to Germany's Air Berlin in 2011.

Then after Air Berlin went defunct, he won back the airline this January, edging out IAG, owner of British Airways, and Ryanair. He re-named it LaudaMotion, but then in another twist sold a majority stake in it to Ryanair in March.

Lauda, who also runs some private business jets, has also suffered catastrophe in aviation: on May 26, 1991, a Lauda Air Boeing 767 crashed on its way from Bangkok to Vienna. All 223 people on board died.

Recognisable by the trademark red cap which hides scars from his racing accident, Lauda has stayed in the limelight.

He has never strayed far from Formula One: he worked as a television commentator, a consultant for Ferrari in the 1990s and was team principal at the short-lived Jaguar outfit in the early 2000s. In 2012, he became Mercedes' non-executive chairman.

In an interview with AFP on the sidelines of the Monaco Grand Prix in May, he criticised the Halo protection now installed in cockpits, saying it detracted from the sport's allure of "gladiatorial combat".

Born on February 22, 1949 in Vienna into an upper middle-class family, Andreas Nikolaus 'Niki' Lauda is the father of four children from two marriages -- Lukas (39), Mathias (37) and eight-year-old twins Max and Mia.

Despite his talent, his family did not share his passion for cars.

"A Lauda should be on the economic pages of the newspaper, not the sports pages," his grandfather used to say.

But at 15, before he even had his driver's licence, Lauda bought an old Volkswagen which he took apart and patched up, driving it around his grandparents' estate.

In 1968, without telling his parents, he took part in -- and won -- his first race with a Mini Racer he had bought with his grandmother's help.