CULTURE No love for the defense in Super Bowl 53

No love for the defense in Super Bowl 53 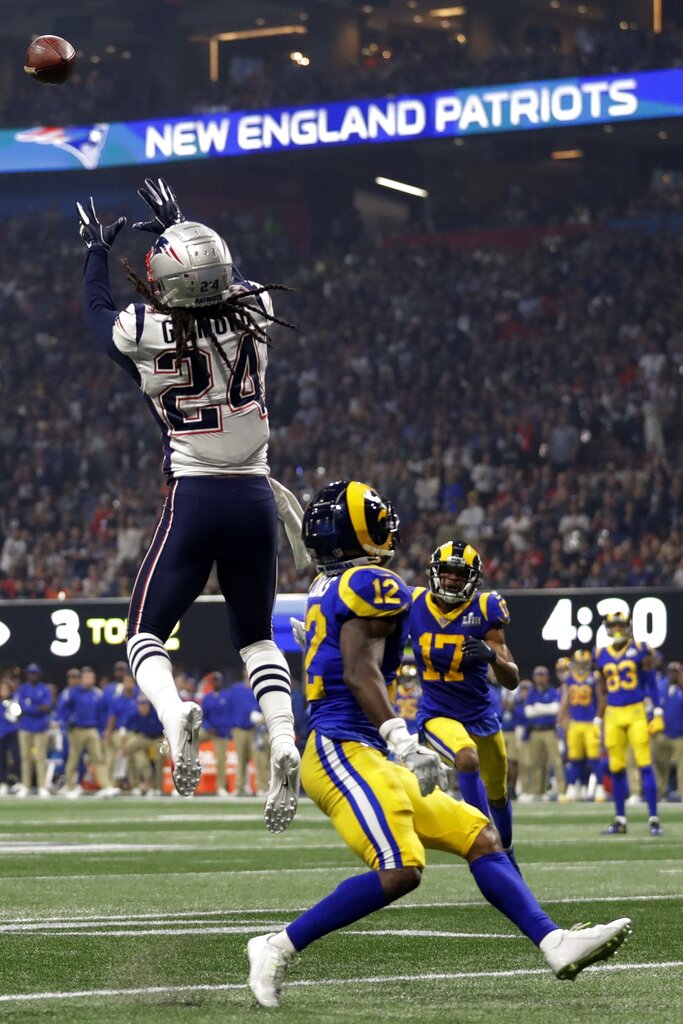 New England Patriots' Stephon Gilmore (24) intercepts a pass intended for Los Angeles Rams' Brandin Cooks (12), during the second half of the NFL Super Bowl 53 football game Sunday, Feb. 3, 2019, in Atlanta. (Photos: AP)
Where's the love for the defense?
Sure, Edelman caught 10 passes for 141 yards, including two grabs on the drive that ended with rookie running back Sony Michel plowing into the end zone with the game's lone touchdown.
Yet, if there ever was a case for another defensive MVP like Von Miller in Super Bowl 50, this was it.
Of 54 MVPs (Cowboys DT Randy White and DE Harvey Martin shared the honors in 1978), 42 have been offensive players, 11 were defenders and one was a special teamer (Desmond Howard in 1997).
There were plenty of worthy candidates from the Patriots defense that hit Goff 16 times, collected four sacks, broke up eight passes and picked off another.
Two defenders really stood out:
—Jason McCourty raced across the field to break up a would-be touchdown toss to Brandin Cooks, who was wide open — but ... had ... to ... wait ... forever ... for Jared Goff's rainbow pass that was knocked away just as it arrived.
—Stephon Gilmore intercepted Goff's pass in front of his end zone with 4:17 remaining on a pass intended for Cooks to seal the sixth title for Tom Brady, who outplayed Goff, and Bill Belichick, who outsmarted Sean McVay.
Calais Campbell , for one, insists Gilmore was the real MVP of SB53 after forcing a fumble, intercepting a pass, breaking up three other throws and collecting five tackles.
"The offense only scores 13 points and they give MVP to Edelman but the D only gives up 3 points and Gilmore" does all of that, Campbell complained on social media. "Smh no respect for the masterpiece on defense."
The Rams may very well represent the future with their 33-year-old coach and 24-year-old quarterback, but the 66-year-old coach and his 41-year-old QB still reign supreme in 2019 — thanks again to a defense that allowed the duo to survive another masterful game plan by Rams defensive coordinator Wade Phillips.
Brady's worst Super Bowl — three scores in 11 drives that didn't end in kneel-downs — also was his easiest — a 10-point margin of victory was his highest ever.
McVay and Goff both accepted the blame for a miserable showing in which Rams never adjusted to New England's zone defense and aggressive D-line and managed to score just once in a dozen drives, the first eight of which ended in punts. 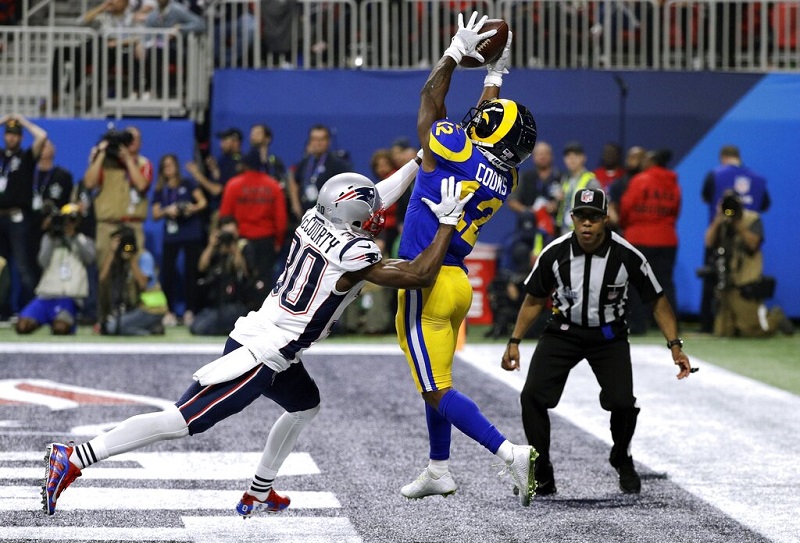 New England Patriots' Jason McCourty (30) breaks up a pass intended for Los Angeles Rams' Brandin Cooks (12) during the second half of the NFL Super Bowl 53 football game Sunday, Feb. 3, 2019, in Atlanta.
When it was over, the high-flying Rams, who led the NFC in scoring with a 33-point average, had nine punts, an interception, a field goal and a missed field goal to show for all that firepower that had so many NFL teams trying to find the next Sean McVay.
After the red-white-and-blue confetti was cleaned up with leaf blowers at Mercedes-Benz Stadium in Atlanta, Rams quarterbacks coach Zac Taylor became the third assistant hired off McVay's staff. He was hired as head coach the Cincinnati Bengals. At 35, Taylor becomes the second-youngest head coach in the NFL behind his former boss.
The Dolphins hired Brian Flores , the Patriots linebackers coach and de facto defensive play-caller who has cut his teeth in Foxborough since 2004.
With those two hires, the coaching carousel has eight new head coaches, six of them with offensive roots, as owners seek the next McVay or Kyle Shanahan to keep up with all this innovative run-pass optioning, jet-sweeping, scoreboard-busting offenses.
The kind that didn't show up in this Super Bowl.
Vic Fangio, who spearheaded Chicago's dominant defense, was the only other defensive assistant hired as a head coach this cycle, replacing Vance Joseph in Denver.
The other jobs all went to offensive minds promising innovation in this age of change.
The Packers hired Matt LeFleur, who was McVay's offensive coordinator in 2017. The Cardinals dipped into the college ranks to hire Kliff Kingsbury, who tutored MVP Patrick Mahomes at Texas Tech.
The Cleveland Browns promoted offensive coordinator Freddie Kitchens, who worked wonders with Baker Mayfield after his midseason promotion from running backs coach. The Jets hired Adam Gase, Peyton Manning's former OC who wore out his welcome in Miami, and the Buccaneers brought Bruce Arians and his deep offensive roots out of retirement.
Miami fans should be ecstatic about the arrival of Flores, 37, after watching him help their AFC East rival win yet another Super Bowl title.
Saints fans didn't pay much mind to Super Bowl 53.
Thousands of New Orleans football fans partied in the French Quarter while the Rams and Patriots were trudging into the fourth quarter tied at 3.
A "Boycott Bowl" festival and a jazz funeral procession putting the football season to rest encapsulated how New Orleans residents felt about the Super Bowl, and even the city's police department got in on the disenchantment.
NOLA.com/The Times-Picayune reports the New Orleans Police Department made a spoof video showing their investigation into the infamous "no-call" in the NFC championship that the Saints lost to the Rams.
The newspaper's nearly blank front page also summarized what those in the Big Easy thought of the Patriots' win over the Rams on Sunday: "Super Bowl? What Super Bowl?"
Cover image: New England Patriots' Stephon Gilmore (24) prepares to intercept the ball against Los Angeles Rams' Brandin Cooks (12) during the second half of the NFL Super Bowl 53 football game Sunday, Feb. 3, 2019, in Atlanta.