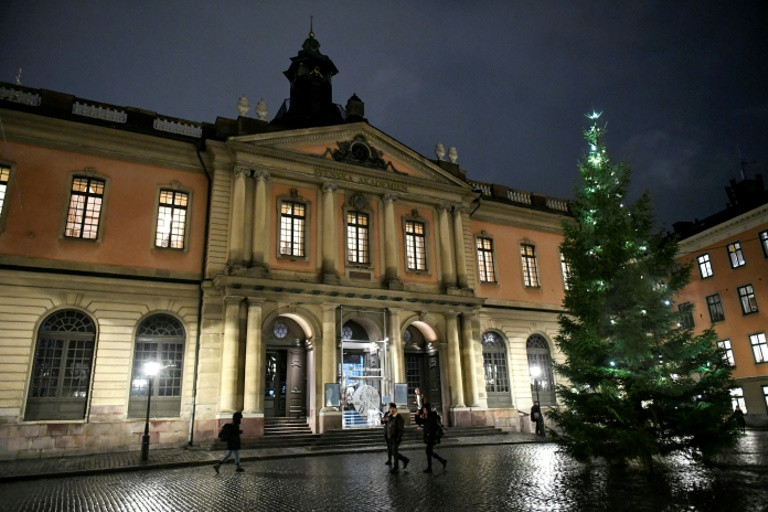 The Swedish Academy, whose headquarters in Stockholm's old city is pictured on November 23, 2017, announced Thursday that several of its members and their relatives have accused a man connected to the institution of sexual assault. Photo: AFP

The Swedish Academy, which awards the Nobel Literature Prize, has been rattled by a sex scandal as a high-profile man with close ties to the institution has been accused of assault against several women.

The #MeToo campaign exposing sexual misconduct which began in Hollywood has shaken artistic, media and political circles in Sweden, one of the most gender equal countries in the world.

More than 10,000 women -- including actresses, journalists, lawyers and musicians -- have spoken up and campaigned against harassment.

The prestigious Swedish Academy, founded in 1786, was drawn into the sex abuse net on Thursday when it announced that several members as well as members' wives and daughters had allegedly been assaulted by the well-known figure at the center of the scandal.

"When an institution which selects Nobel laureates finds itself in this type of situation then it of course risks affecting the Nobel prize negatively," Lars Heikensten, executive director of the Nobel Foundation, told the daily Dagens Nyheter newspaper.

The paper broke the news on Tuesday when it published the testimony of 18 women claiming to have been assaulted or raped by one of the most influential figures in Stockholm's cultural scene.

- 'Everyone has always known'-

The accused man's name has not been published in the media due to Swedish laws on the presumption of innocence. But his identity is generally known by the public as he is a high-profile person in cultural circles and his name has appeared in online chat forums discussing the issue.

He did not respond to AFP's request for a comment, though he told Dagens Nyheter he was innocent.

Married to a writer with "close links to the Swedish Academy", the man runs a cultural club showcasing exhibitions, readings and performances by both the cultural elite and hopefuls -- including Nobel literature laureates -- and dubbed by some as "the Academy's living room".

The club has been partly funded by the Academy.

The alleged sexual assaults occurred between 1996 and 2017, some of them in the club's premises, according to Dagens Nyheter.

Several women spoke openly, allowing the newspaper to reveal their identities, and their stories were corroborated by witnesses, the paper said.

One of the accusers claims to have been raped in an apartment in a posh Stockholm neighborhood.

"Everyone knows, and everyone has always known," that he was attacking young women, she says.