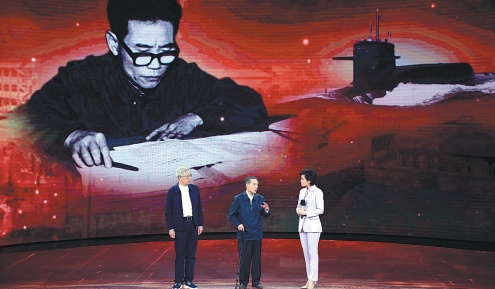 Peng Shilu's colleagues remember him at a ceremony in Beijing last month conferring the nuclear expert with the title of "Role Model of the Times" for his contributions. (Photo: Xinhua)

This declaration may sound bold, but considering the work he did, it is more of an understatement. Despite being one of the founding members of China's nuclear power industry, Peng described himself as playing a tiny role in the grand scheme.

In fact, he held leading positions in most of China's early nuclear power projects, from the first-generation nuclear submarines to the establishment of Dayawan and Qinshan nuclear power stations.

Peng, who was an academician at the Chinese Academy of Engineering, passed away in Beijing on March 22 at the age of 96. The Publicity Department of the Communist Party of China Central Committee recently conferred the title "Role Model of the Times" on Peng for his contributions.

Peng was born in 1925 into a family of heroes. Both of his parents, Peng Pai and Cai Suping, devoted themselves to the Communist revolutionary cause and sacrificed their lives.

Peng Shilu lost his mother at the age of 3 and his father at 4. The Kuomintang forces sought to arrest him, but the locals, out of gratitude to his father, took him in and hid him from village to village.

Despite that, he was still imprisoned at only 8 years old. A village woman, who took him in as a member of her family, was also arrested but refused to confirm that he was Peng Pai's son even under torture. After he was released, he joined in the War of Resistance Against Japanese Aggression (1931-45), and went to the revolutionary base area of Yan'an, Shaanxi province, in 1940.

"My difficult childhood experiences honed my character of being unafraid of hardship. I am eternally grateful to the people and no matter how hard I try, I feel I cannot repay the benevolence they bestowed upon me," Peng once said in a recollection.

After the founding of the People's Republic of China in 1949, Peng was selected to study chemical machinery in the Soviet Union. In 1956, when he was about to graduate, he faced a turning point in his life. 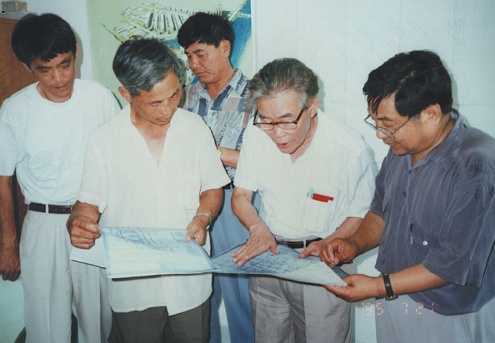 A file photo shows Peng (second from right), an academician of the Chinese Academy of Engineering, discussing work with researchers. (Photo: Xinhua)

At that time, the central government decided to select a group of outstanding students studying abroad to transfer to the atomic energy major. Peng willingly agreed, hence marking the beginning of his lifelong work to develop China's nuclear power.

In 1958, China started to independently develop its own nuclear submarines, and Peng was appointed to take charge of the research and design of the nuclear propulsion system.

Although China had no resources, knowledge or international support in developing nuclear power, Peng led the team with intrepidity and decisiveness.

"Time is an asset. When encountering obstacles, sometimes we simply have to test the solutions through practice. If the solution doesn't work out, we should change it as quickly as possible. It's much more efficient than endless arguments," Peng said.

China's first nuclear submarine was launched in 1974, making it the fifth country in the world to have nuclear-powered submarines.

In the 1980s, China decided to build a commercial nuclear power plant. Appointed as the director-in-chief, Peng once again devoted himself to its preparation and construction.

"Maybe because my zodiac animal is the ox, I very much admire the headstrong spirit of the animal. If I decide to do something, I will persevere to the end. It's enough to spend my lifetime loving my country, being loyal to it and dedicating myself to its prosperity," Peng said.

In 2017, he was conferred with the top science and technology achievement award by the Ho Leung Ho Lee Foundation, but he donated all the prize money as a fund to award young people making significant innovative achievements in the field of nuclear power.

"Peng was a person who never pursued fame or fortune, but when asked to contribute to something, he always rushed to the front," says Ye Xiangdong, a former official from China National Nuclear Corp.

"He once told me that after he returned from the Soviet Union, he decided to devote his entire life to the nuclear power industry. And I can safely say that he kept his promise with his lifetime work."