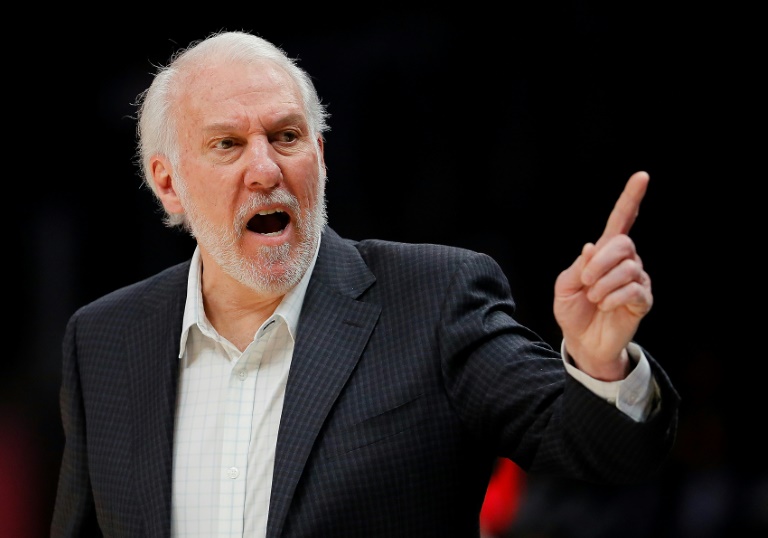 Nikola Jokic was just one assist shy of a triple-double Wednesday as he led the Denver Nuggets to a 113-85 NBA blowout of the San Antonio Spurs -- who saw coach Gregg Popovich tossed just 63 seconds into the contest.

"Pop" called a timeout with the Spurs trailing 5-0 and promptly started jawing with a game official who called him for a technical foul.

Popovich didn't let up, and was hit with a quick second technical and ejected at 1:03 of the first quarter, in what the Elias Sports Bureau said was the quickest ejection of a coach since Flip Saunders of the Wizards was tossed 1:46 into a game at Boston in 2012.

Popovich had some fun with it when he crashed Nuggets head coach Mike Malone's post-game press conference, feigning surprise at Malone's report that "Somebody got thrown out in 63 seconds."

Otherwise there wasn't much for the Spurs to smile about as the Nuggets, second in the West behind the Golden State Warriors, dominated.

"My favorite stat tonight is 41 assists," Malone said. "You make 47 shots with 41 assists, that's what we stressed today.

"Everyone was worried about our shooting struggles, but as long as we're generating good shots and playing for each other, that's all we care about."

The Rockets crushed the Los Angeles Clippers 135-103 in what could have been a preview of a first-round playoff matchup.

James Harden and Chris Paul combined for 60 points, making 19 of 34 shots with 14 assists. Clint Capela added 24 points with 15 rebounds as the Rockets stayed a half-game in front of the Trail Blazers for third place.

The Trail Blazers, heading for the playoffs without Jusuf Nurkic after the star center's catastrophic leg injury earlier this month, notched their 50th win of the season, 116-89 over the Memphis Grizzlies.

Evan Turner posted his second straight triple-double with 13 points, 12 rebounds and 11 assists off the bench. Enes Kenter scored 21 points and pulled down 15 rebounds and Damian Lillard chipped in 20 points and 10 assists for Portland, who have won 11 of their past 13.

In the East, Gordon Hayward scored 25 points to pace the Boston Celtics in a 112-102 victory over Miami that saw the Heat drop out of playoff position.

Kyrie Irving added 23 points and Al Horford chipped in 21 for the Celtics.

"It was a tough one," Hayward said of the Celtics' second win over the Heat this week. "It's tough to beat a team twice in a row like that, especially at home, they're desperate," Hayward said.

Boston remained in fourth place ahead of the Indiana Pacers, who beat the Detroit Pistons 108-89.

It was the Pacers' second win over the Pistons in three games.

"I hate playing teams back-to-back games," admitted Thaddeus Young, who led the Pacers with 21 points, eight rebounds and four assists. "They get to lock in on you a little bit more. It's a playoff-type setting."

Andre Drummond scored 28 points, pulled down 19 rebounds and had three steals and three blocked shots for the Pistons, but the Pacers took full advantage of the continued absence of Blake Griffin to seize the win.

The defeat left the Pistons in sixth place in the East, heading a quartet of teams separated by just one game as they fight for the three remaining playoff berths.

The Brooklyn Nets' hopes took a hit with their 115-105 loss to the Toronto Raptors.

The Orlando Magic, meanwhile, did themselves a world of good with a 114-100 victory over the New York Knicks that saw them leapfrog over Miami into eighth.

Piling the pressure on Miami, the 10th-placed Charlotte Hornets also kept their slim hopes alive with a 115-109 win over the New Orleans Pelicans.