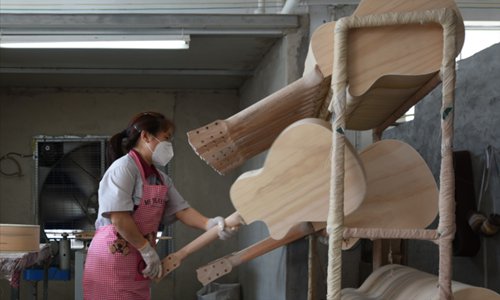 A worker puts a half-done guitar on a shelf at a guitar industrial zone on July 3. (Photo: IC)

Residents of Zheng'an, an obscure county deep inside the valley of Southwest China, used to make a living either by being a farmer or a migrant worker. Now, they have found a new way out - making guitars.

Im Kyo Kuk, president of a trade company based in South Korea, tested the quality of a Chinese-made guitar in a workshop in Zheng'an county, Guizhou Province. It was Im's fifth visit to Zheng'an, where he can get "quality guitars at a reasonable price and with good service."

Zheng'an was once an anonymous place characterized by steep mountains and barren land. To survive, most locals had to toil in small plots of land or leave their wife and children for the big cities where they can get a job.

Guitar manufacturing started in 2012 when the local government studied how to transform the mountainous agricultural county.

They found that a large number of Zheng'an residents worked in guitar plants in more prosperous Guangdong Province, South China, in the 1980s and 1990s. In Guangzhou alone, more than 20,000 Zheng'an people work in the guitar industry.

Zheng Chuanjiu is one of them. He ran a successful guitar factory in Guangzhou when he received an invitation from his hometown government to start a business back home.

Without raw materials, support industries and convenient transportation, Zheng'an was not an ideal destination for his business. But he decided to move back given the preferential policies, cheap land and labor force. He set up a musical instruments manufacturing company in his hometown in 2013. "In the long run, Zheng'an favors my company," he said.

At a guitar industrial zone of more than 60 hectares, guitar-related elements can be found everywhere, ranging from street lamps to sculptures. A guitar-themed music drama has also premiered to shore up the industry.

Zheng'an is now home to some 54 guitar-related enterprises. Six out of 10 global guitar brands have manufacturing plants in the industrial zone. Around 60 percent of the products there are sold to more than 30 countries and regions in Europe and the US.

"My company can save more than 6 million yuan ($873,000) in operating costs for a year since moving here," said Ma Dashu, the legal representative of the Mashi guitar manufacturing company.

Last year, the industrial zone produced and sold more than 6 million guitars worth 6 billion yuan, according to Deng Zhaotao, secretary of the branch of the Chinese Communist Party in Zheng'an.

Shu Xiaonü, a resident of Jiefang village, abandoned her life as a migrant worker in Guangzhou after a guitar plant opened in her county.

"My husband and I can earn up to 9,000 yuan a month now. More importantly, we can stay together with our child," Shu said.

China aims to eradicate poverty by 2020, the target to finish building a moderately prosperous society. The guitar manufacturing industry plays a role in generating wealth for the impoverished Zheng'an.

Statistics showed that the guitar industrial zone had provided jobs to more than 13,700 people by the end of 2018, including more than 1,280 registered impoverished villagers.

"Zheng'an county has become a major guitar manufacturing base in China. It is beyond imagination that this trendy Western musical instrument can be produced in such a remote, landlocked region like Guizhou," Deng said.