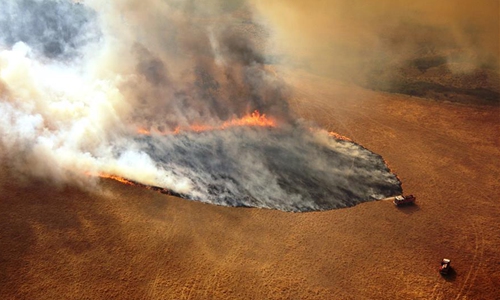 The amount of additional heat the world's oceans have taken in over the past 25 years was equal "to 3.6 billion Hiroshima atom-bomb explosions," Cheng Lijing, lead author and associate professor with the International Center for Climate and Environmental Sciences at the Institute of Atmospheric Physics of the Chinese Academy of Sciences in Beijing, told the Global Times on Tuesday.

The paper "Record-setting ocean warmth continued in 2019" was written by 14 scientists from 11 institutes around the world and published by the international journal Advances in Atmospheric Sciences on Monday.

The world's oceans were warmer in 2019 than at any other time in recorded human history, the report finds, and the authors warn more catastrophic fires like those that have ravaged the Amazon and Australia are likely.

"Global heating is one of the reasons for the increase in catastrophic fires in the Amazon, California and Australia in 2019, and we're seeing that continue into 2020," Cheng said.

The paper concludes that the past decade has been the warmest 10 years on record for global ocean temperatures, with each of the past five years breaking successive records.

The year 2019 broke records set in previous years for global warming, and the effects were already appearing in the form of more extreme weather, rising sea levels and harm to ocean animals, the authors noted.

And as global warming intensifies, more disasters like the Australian bushfire will likely occur, Cheng warned.

As sea levels rise, coastal cities worldwide especially in Malaysia and the Maldives will have to deal with submerged land, Cheng noted.

Global climate change in 2019 amplified 15 extreme weather disasters that cost millions of dollars such as wildfires in California, Hurricane Dorian in the Bahamas and the European storm Eberhard, according to British charity Christian Aid report released in December, 2019.

All of these disasters are linked with human-caused climate change, said the report by the British charity.

The Australian bushfires, which have killed at least 27 people and a billion animals, should serve as a powerful reminder for countries to take action, according to Chinese climate experts interviewed by the Global Times on Tuesday.

"In 2020 and upcoming years, we'll face a more severe climate environment," Wang Gengchen, a research fellow at the Institute of Atmospheric Physics of the Chinese Academy of Sciences, told the Global Times on Tuesday.

"However, we should remain positive," Wang said, "as a more severe situation will make more people really care about this matter before climate change causes more damage."

Authors of the report published on Advances in Atmospheric Sciences called for enhanced efforts to reduce greenhouse gas emissions, develop new energy sources and transition to a clean energy society to help mitigate the impact of global warming and better prepare for the upcoming challenges.

Countries must work together to slow the warming of the planet, Wang said, and no matter the size of a country, all share a responsibility for reducing greenhouse gas emissions.

Instead of blaming developing countries as emitters of carbon dioxide for heating the Earth, Wang said, "developed countries should remember they used to be the largest emitters during their industrialization and so they should provide technology and financial support for developing countries to become more environmentally friendly."

In November, the US officially launched its withdrawal from the Paris global climate change accord, Wang noted, whereas China, another of the biggest emitters, was committed to fulfilling its obligations in helping reduce greenhouse gases.