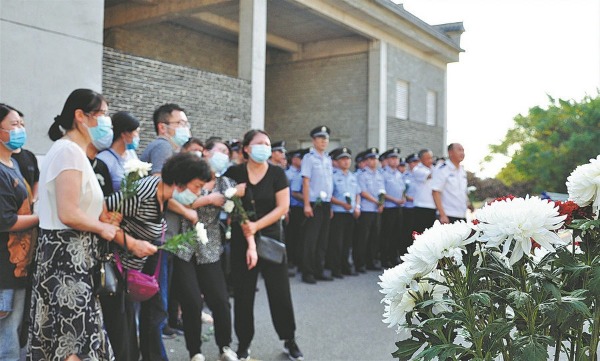 The family and colleagues of Zhou Lei wait for the arrival of his body in front of a funeral parlor in Anqing, Anhui province, on Sept 24. (Photo provided to China Daily)

As a group of police officers took off their hats and saluted a body in uniform lying amid a sea of flowers on Sept 28 in Anqing, Anhui province, the eyes of about 150 people at the funeral hall welled up with tears.

"In the past days, since Sept 24, every time I see Zhou Lei's name, I just wanted to cry," said Ma Zhongdong, Zhou's colleague.

As the head of a criminal police team responsible for major and serious criminal cases in Anqing, Zhou had solved more than 600 criminal cases and participated in more than 100 arrest missions, according to the police.

On the morning of Sept 24, he led a team to the neighboring Tongling city to arrest someone suspected of a major theft. An officer with 22 years of experience, he stood at the front as always, according to his colleagues.

Zhou, 43, knocked on the door of the suspect's home, as three other officers took position on both sides preparing to conduct an arrest.

When the door opened, the suspect surnamed Huang, resisted arrest, urging his wife to give him a knife, according to Chen Yifan, who participated in the mission.

Zhou reacted rapidly, put a handcuff onto one of Huang's wrists with the help of his colleagues, while Huang's violent resistance continued for about five minutes.

When the suspect was finally brought under control, Zhou, who fought bravely, fell into a coma. After doctors spent about an hour attempting to resuscitate him in hospital, he was pronounced dead from sudden cardiac failure. 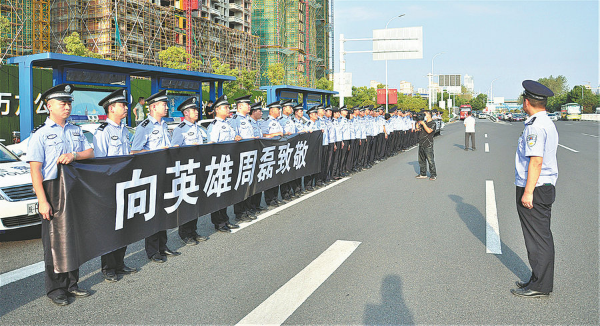 Officers display a banner commemorating their colleague, who died while on duty. (Photo provided to China Daily)

Zhou's colleagues said he had risked his life on many missions since 1999, when he graduated from police school and joined a local station.

Once in April 2018, when Zhou and his team members had been mobilized for an arrest mission, he unexpectedly came across the suspect in an elevator.

Zhou threw himself at the suspect, who was carrying a knife, without any hesitation.

As his colleagues recalled, he said to them after the mission was completed, "as an officer, you cannot fear death. If you do, then quit".

"Every time when we had tough missions, the first man we wanted was Zhou, who had become a real expert in criminal cases," said Wang Tao, deputy director of Anqing Public Security Bureau.

A grandson of soldiers who served the Communist Party of China's army in the 1930s, Zhou cared about people.

On the day prior to his death, he received a call from an elderly man that his cellphone had been stolen in hospital. After some investigation via surveillance videos, he rode his scooter to a bath house, found the thief and returned the cellphone to its owner.

Once, his colleagues asked him why he did not drive a car to commute, he said riding the scooter helped him watch the city better.

Hardworking and meticulous in his colleagues' eyes, Zhou was also a caring husband.

"If he was home, he would cook the meals and if he returned late at night, he would go to our daughter's room to check she hadn't kicked off the quilt," said Cao Liying, his wife.

Cao does not have a steady job and has to stay home to take care of their child and elderly family members.

"Every time he traveled to coastal cities for work, after the mission was finished, he would go to the seaside and show me and our daughter via videos how splendid the sea was," she said.

After Zhou passed away, Xing Yuelan, victim of a previous criminal case handled by the officer, still sent a message to his mobile phone number.

"Why are you so careless with your safety, why don't you protect yourself better?" said Xing in the message.

Between 1949 and 2020, more than 16,000 police officers have died and more than 300,000 others have been wounded while on duty, according to a report by the Ministry of Public Security released in January.

Overwork has also been a major cause of death among officers, according to the report.