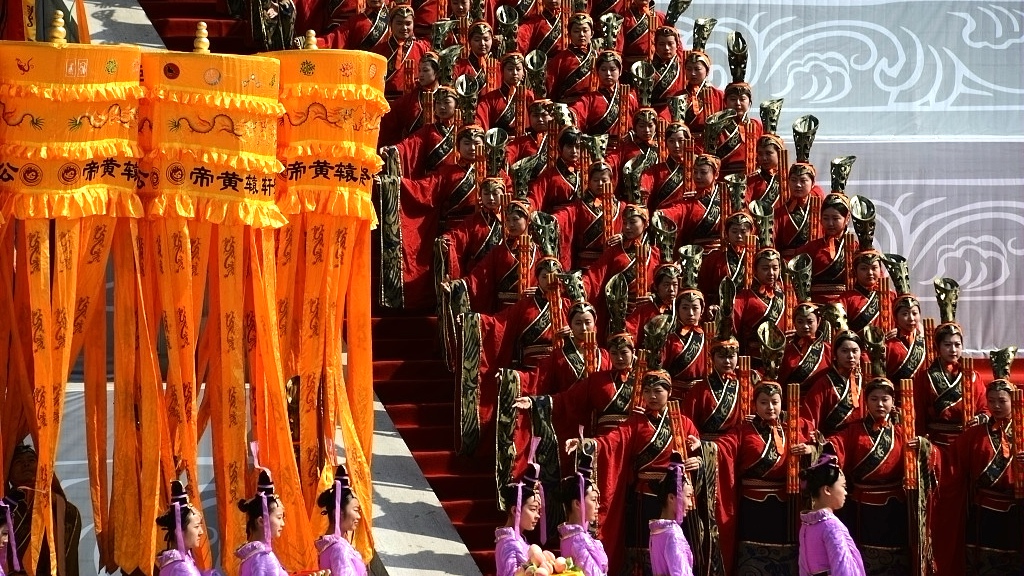 A frame of a video of the ceremony paying tribute to Huangdi on Qiaoshan Mountain, northwest China's Shaanxi Province, April 5, 2022. (Photo: CGTN)

A ceremony paying tribute to Huangdi, or the Yellow Emperor, the legendary primogenitor of ancient China, was held at the Mausoleum of the Yellow Emperor on Mount Qiaoshan, northwest China's Shaanxi Province on Tuesday, to mark China's Qingming Festival, or Tomb-Sweeping Day.

A group of 120 children performed the song "Ode to the Yellow Emperor" as part of the ceremony's procedures, showcasing the cultural inheritance of the Chinese nation. The ceremony consisted of nine rituals, including bowing to the statue of the Yellow Emperor, a dragon dance and planting Qiaoshan cypress. Legend has it that the Yellow Emperor planted the cypress in Qiaoshan and his followers kept up the tradition creating the woody area there.
The number of performers in the offline performance during the ceremony was greatly reduced this year in line with the requirements of COVID-19 pandemic prevention and control measures.

The ceremony was streamed live on multiple online platforms, with "5G+AR+ digital location" technology helping to finish the 8K ultra virtual reality interactive scenes. The ceremony enhances the viewers' sense of on-site experience and increases public participation in the Qingming festival memorial.
The Tomb-Sweeping Day worship of the Yellow Emperor has become a traditional event for Chinese people at home and abroad to remember their cultural origins and strengthen the nation's cohesiveness, according to a Xinhua report.