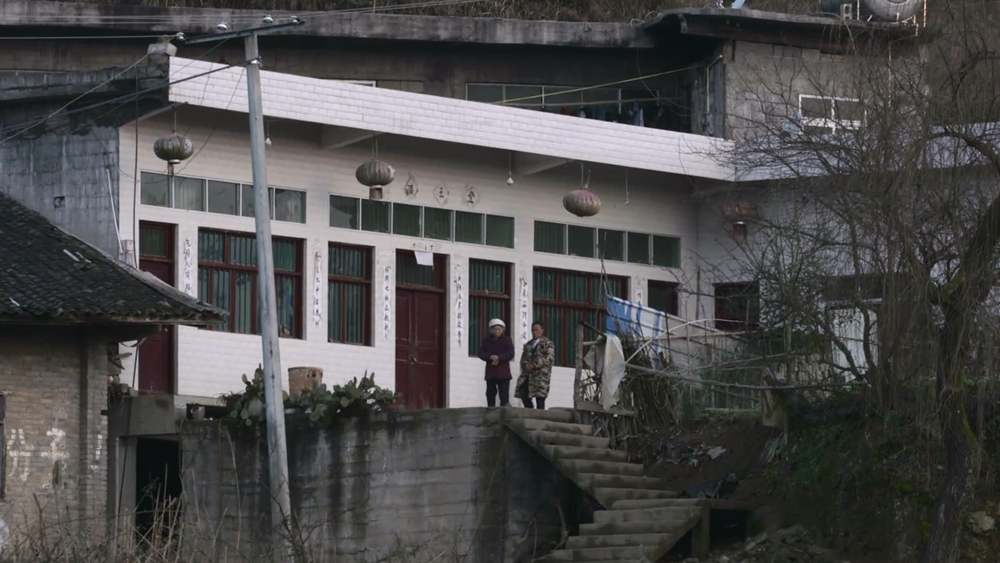 Qiao Chenhui and his wife in front of their house in Datu Village in Yanhe County, Guizhou Province. (Photo: CGTN)

Qiao Chenhui begins his day by preparing the pig feed. He chops up corn stover as his wife makes the fire. The 75-year-old farmer has taken up more work because he thinks his wife is fragile as a woman at 72.

The elderly couple live a quiet rural life plowing the field and tending the animals. In their small village in Yanhe County, southwest China's Guizhou Province, it doesn't take long for one to notice that there are almost no young people around.

Qiao's four children, one son and three daughters, have all left home to look for work elsewhere. Some of them are working in the nearby town and others in big cities like Shanghai and Shenzhen, his wife said.

The migration of workers from the provincial inland to the affluent coastal regions has fueled China's economic boom in the past decades. Hundreds of millions of migrants have settled in towns and cities, contributing to the country's rapid urbanization. Few looked back.

The latest official figures show China has more than 830 million urban residents, some 59 percent of the population. In 1978, that number was only 17.8 percent. Each year, while more than 10 million migrants from rural areas flock into cities for a better life, their elderly family members are left behind.

Qiao and his wife are known as left-behind seniors, those who have remained to live out their twilight years in underdeveloped villages after their children left.

"As an old couple, we need to understand, comfort and help each other. We can't stand by and watch," said Qiao, who helps his wife in the kitchen.

As they eat together, the couple discuss their plan for the day and ways to earn more income. Last year, Qiao bought two pigs from the market for about 1,000 yuan (US$148.7). After 13 months of feeding, one of the pigs grew ten times heavier and sold for 7,300 yuan (US$1,080). They are thinking about going to the market again.

Rural communities in China have for many centuries depended on families working on the fields to provide for seniors and children. But with the young and able joining the industrial workforce, what's left of the old agricultural lifestyle today is mostly wrinkled hands and tottering feet.

As spring comes, the field needs to be done soon. Qiao has enlisted help from his brother, Qiao Chenliang, to plow the field before they can sow seeds for the year's produce.

"We have to stay for the field or it will go wasted," Qiao said. "I don't want them (my children) to stay with me all the time, because we are still healthy enough to work."

"So we don't ask them to take care of us too much. If we can do it ourselves, it will ease their burden," he said.

Qiao said his children would call occasionally, and he is happy with that because "almost every family here is like this."

He said his health would allow him to continue working for at least another three to four years, but no one knows what could happen.

As the traditional model of family support gradually breaks down, the villagers understand now they must depend on one another.

The Yanhe County government planned to build 449 rural elderly care homes with 4,250 new beds by the end of 2019 to provide service to senior villagers. Social programs like this are largely run on a community basis, where altruism and neighborly help are expected to fill in the gaps from the lack of staffing.

In 2013, the number of left-behind elderly people in China had already topped 50 million, the population of a medium size country. A majority of 81 percent of these elderly people have to continue working to support themselves.

China became an aging society in 2000 according to United Nations metrics. It is estimated that the country's rural population aged 65 and above will reach 155 million by 2030.

Across the country, local governments have stepped up efforts to address the needs of left-behind seniors, an issue of increasing importance for China's society. The government estimates that by 2050, more than 26 percent of China's GDP will be spent on elderly care, up from just over 7 percent now.

In February 2018, nine departments in China jointly released a guideline for improving the care for left-behind elderly people in rural areas. The document urges younger family members to take care of their elders, and asks local governments and village committees to provide seniors with necessary assistance.

But the hard thing for the rural seniors, who have lived through many hardships in their lifetime, is perhaps the sense that their children, grandchildren and the country as a whole have moved forward while they stand still, left behind by time.

This year ahead of the lunar new year holiday, a short film "What is Peppa?" about how a left-behind grandpa painstakingly tries to find out what his grandson's favorite "Peppa" is, warmed the nation's hearts after it went viral. It is also a reminder of the widening cultural gap between the rural old and the urban young.

A 2017 state-media survey on the needs of seniors in rural areas revealed that 43 percent of those left-behind elderly people want their children to return home during holidays, and 26 percent wish their families could visit every month.

This yearning of the heart too will make way for the future.

There is a custom in Qiao's village that when someone dies, all the villagers would gather together for the funeral to give the deceased a dignified send-off.

"It happens to every family. It is a sad thing indeed. But the dead are dead. We bury them in peace in the mountain," Qiao said.

"We should care more about the living."