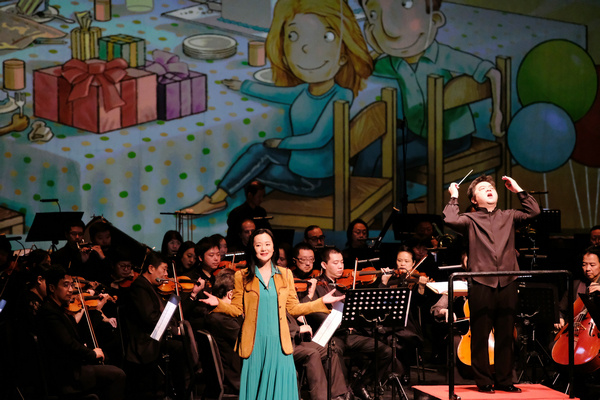 Yong Mei, who won the Silver Bear for Best Actress at the 69th Berlin International Film Festival for her performance in the film, So Long, My Son, narrates the concert at Poly Theater in Beijing on Oct 17. (Photos: China Daily)

Every year around this time, the Beijing Music Festival presents a series of exciting classical music performances.

Launched by conductor Yu Long in 1998, the festival also aims at popularizing classical music and fostering a new generation of classical music lovers with events, such as master-classes and guidance before concerts.

With the novel coronavirus disrupting this year's plans, Yu and the festival team decided to move the festival, which runs from Oct 10 to today, online and out of the concert halls.

Via the BMF Club app, audiences are able to listen to more than 240 hours of nonstop broadcasting. And the festival organizers cooperated with Beijing Music Radio to present 10 noontime concerts in unconventional venues. 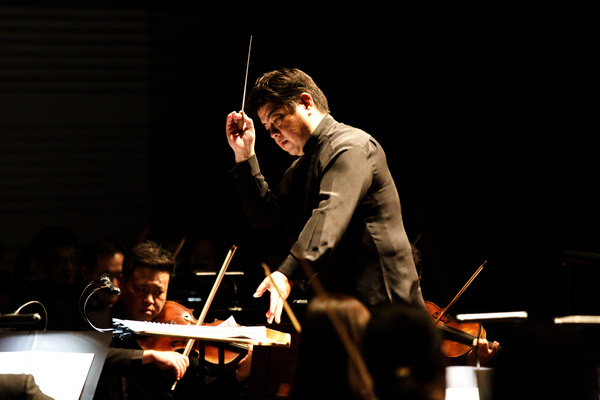 "We took those noontime concerts outside the concert halls and staged them at iconic places in Beijing, such as big shopping malls. We wanted to bring classical music closer to the audience, who might not get a chance to enjoy it in a concert hall," says Gu Yue, a host of these noontime concerts that were broadcast by Beijing Music Radio.

With the support of Kuke, an online music platform, the Beijing Music Festival hopes to help satisfy a growing demand for classical music.

In 2019, the Beijing Music Festival launched a children's symphony orchestra, comprising 53 children, ages 9 to 16. The average age was 11.

On Oct 19, 2019, the orchestra made its stage debut with a concert celebrating the 200th anniversary of Offenbach's birth.

In April, the orchestra recruited new members, which expanded its size to 100 performers.

Besides the online concerts, the Beijing Music Festival also offers 20 live concerts at Poly Theater. "Online music could never take the place of the experience that the live performances provide," Yu Long says.

"Because of the coronavirus epidemic, the orchestra's members quickly transitioned to online tutoring. Though the programs they performed are very challenging, all of the members trained hard for the concert," says Zhao Bingbing, conductor of the orchestra.

Sleepover at the Museum for Children and Family, a concert featuring a new multimedia orchestral work by Karen LeFrak based on her children's book with the same title, was performed by the Beijing Symphony Orchestra under the baton of conductor Li Biao at Poly Theater in Beijing on Oct 17. Award-winning actress Yong Mei was the narrator of the concert. The concert was also streamed on BMF Club app, enabling it to appeal to more children.