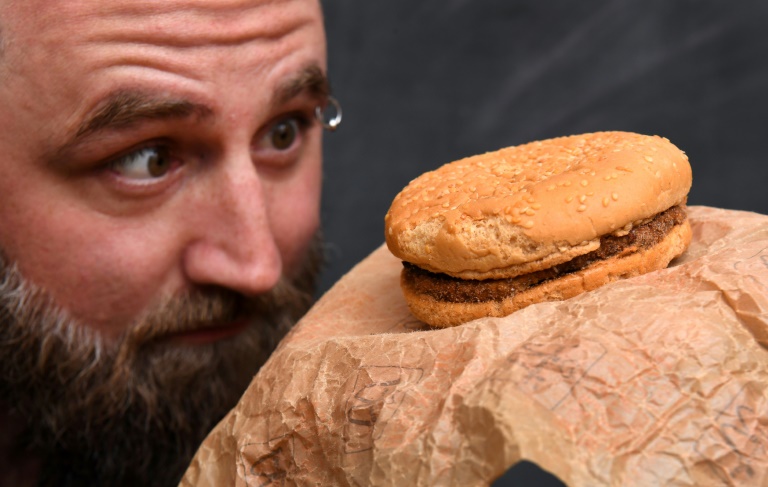 Casey Dean inspects a McDonald's burger he bought in 1995 with friend Eduards Nits and kept in an Australian shed for years. (Photo: AFP)

A McDonald's burger allegedly bought in 1995 and kept in an Australian shed for years has never decomposed, according to two men who now refer to the quarter-century Quarter Pounder as their "mate".

Casey Dean, 39, and Eduards Nits, 38, claim they ordered the Quarter Pounder with cheese from a McDonald's outlet in Adelaide as teenagers -- and have hung onto it ever since.

Their claims have been publicised several times in Australia over the years, but have made headlines again just days after a livestream of a decade-old McDonald's cheeseburger displayed in a glass case in Iceland went viral.

The American chain closed its only three branches in Iceland during the island's financial crisis in 2009 and just before the restaurant's closure, Hjortur Smarason bought a menu for conservation.

He first kept the meal in his garage but then lent it to the National Museum of Iceland, after which it was moved to a hotel in the capital Reykjavik for a while.

Now the burger is on display like a work of art inside a glass case at a hostel in in southern Iceland.

Dean, owner of the Australian rival for the oldest McDonald's, said he understood why some might be sceptical about their claim, but argues the packaging -- waxy paper and a cardboard ring -- accurately date the burger to the mid-1990s.

"Being teenagers we ordered a truckload of food, and it was just way too much," Dean told AFP. "It started a chain of events where we were joking 'imagine if we kept this forever', and here we are."

Though the burger has shrunk a little from its original size, its shape remains intact, there are no signs of mould, and it doesn't smell.

The men say their relationship with the Quarter Pounder will span 25 years by November 2020, a milestone even many marriages fail to reach.

Storage for the ancient Aussie burger has been less considered, though it has mostly been kept under lock and key in a box made of timber and cardboard.

That box spent about a decade jumbled up with clothing inside a shed in Adelaide, where temperatures regularly top 30 degrees Celsius in summer.

"The rats had actually eaten through the plastic bag, heaps of clothes, got into the box and they'd left the burger," he said.

Dean is steadfast that the pair would never part with it despite fielding offers from around the world when it first came to public attention in 2015.

A McDonald's spokeswoman did not dispute their assertion, saying the question of why some of its burgers did not decay came up "from time to time" but there was a "simple explanation".

"The reason why our burgers sometimes don't go mouldy when left out at room temperature, in a dry environment, is that once the food is cooked there isn't enough moisture to support bacterial growth to break it down," she said.

"Instead, it simply dries out."

"There is nothing insidious about the content of McDonald's food here," he told the ABC.

"It is simply a matter of low moisture and high salt content of the food."