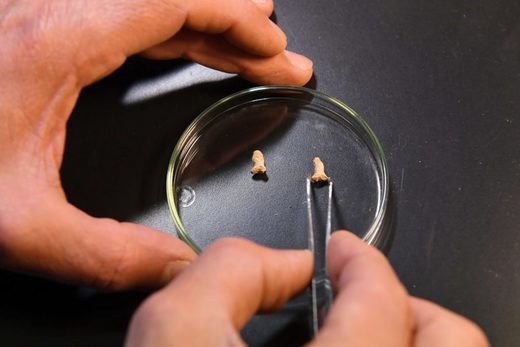 The remains were found mixed with other animal bones several meters below the contemporary floor of the cave.  (Photo: PAP)

The remains, found in Ciemna Cave in southern Poland, are hand bones belonging to a Neanderthal child.

According to Professor Pawel Valde-Nowak from the Institute of Archeology of the Jagiellonian University in Krakow, the remains are about 115,000 years old. The child's bones have been digested by a large bird. "This is the first such known example from the Ice Age" - Professor Valde-Nowak emphasized.

The Neanderthal child, aged about 5 to 7, might have been attacked and partially consumed by a bird, which could also feed on a deceased child. The poor condition of the bones and their small sized, no longer than 1 cm, makes it impossible for the researches to perform DNA analysis. However, the layer the remains have been found in, makes no doubts about the fact that they belonged to a Neanderthal.

The remains were actually found a few years ago, but mixed up with animal bones, and it wasn't until now that the scientists made the discovery with the usage of detailed laboratory analysis.

Professor Valde-Nowak points out that there are no remains of human species that precede the Neanderthal man in Poland, which makes the discovery even more vital.

Neanderthals (Homo neanderthalensis) were very close relatives of modern man (Homo sapiens), which probably appeared in Europe about 300,000 years ago and mostly died out about 35,000 years ago.