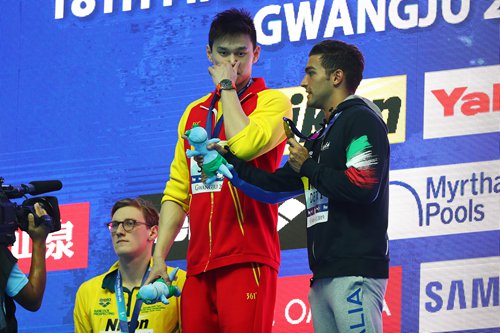 Chinese Olympic champion Sun Yang urged Australian swimmer Mack Horton to respect China, after the latter refused to stand on the podium and have a post-ceremony photo taken with him at Sunday's world swimming championships.

Horton did not shake hands with his bitter rival after coming in second to Sun in the 400-meter freestyle final, and refused to join him on the podium on the  opening night in Gwangju, South Korea.

Horton also approached Italian swimmer Gabriele Detti, who declined the Australian's request to do the same, The Daily Telegraph reported on Monday.

FINA on Monday sent a warning letter to Horton, suggesting the medal ceremony was not the appropriate time for him to make such gesture.

As in all major sports organizations, athletes and their entourages are aware of their responsibilities to respect FINA regulations and not use FINA events to make personal statements or gestures, it said.

Sun called Horton's behavior a "little trick," and said it had no impact on him.

Sun said that "the awarding ceremony was divine, as every athlete represents his own country at that spot…disrespecting me was OK, but you must respect China."

"It doesn't belong to the foreign affairs ministry and you can ask Sun Yang yourself," Geng Shuang, spokesperson of China's Foreign Ministry, said on Monday.

"Sun Yang is the flagship of China's swimming team and we must support him," Han Qiaosheng, a senior Chinese sports commentator told the Global Times.

Han pointed out that Sun's victory has threatened the superiority complex of some people in the West.

Richard Ings, former head of the Australian Sports Anti-Doping Authority (ASADA), wrote on Twitter on Sunday that he blames Horton and believes he should receive a hefty penalty for the podium snub.

Another Twitter user said that "Horton just brought shame to his country. "Disgraceful. Just a young boy who can't lose. Can't be called a man."