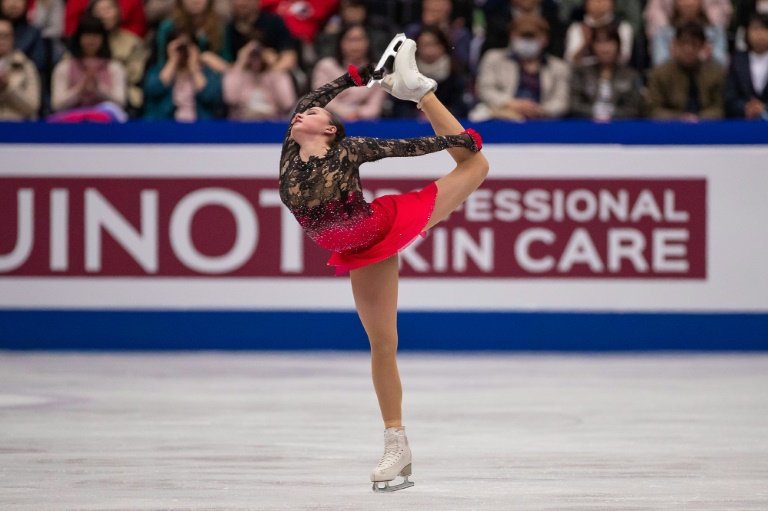 Skating to music from the opera "Carmen", Russia's Alina Zagitova dazzled in a lace black and flame-red dress, flying straight into a triple lutz, triple toe-loop combo and finishing with a flurry of jumps. (Photo: AFP）

Russian Zagitova, who led after the midweek short skate, made devilishly tricky jump combinations look ridiculously easy as the 16-year-old scored 155.42 points for a winning total of 237.50 in Saitama.

Tursynbaeva drew gasps from the crowd when she nailed a quadruple salchow -- the first woman to land a quad in a senior international competition -- on her way to becoming her country's first female world medallist with an overall score of 224.76 for silver.

Skating to music from the opera "Carmen", Zagitova dazzled in a lace black and flame-red dress, flying straight into a triple lutz, triple toe-loop combo and finishing with a flurry of jumps before covering her face with her hands.

"It's been a tough year but it is such a thrill to win gold," said Zagitova, who suffered an Olympic hangover as she slumped to fifth at last year's world championships in Milan and fifth at the Russian nationals.

"This is for all the people who have helped me through the hard times this past year. I'm just so happy, there are no words."

Tursynbaeva, runner-up to Kihira at the recent Four Continents meet, squealed with delight as her score was announced.

The 19-year-old scored 148.80 for her free skate to make history for Kazakhstan and follow in the footsteps of Denis Ten, who won silver at the 2013 world championships and bronze in 2015 before being stabbed to death by carjackers last year.

"It was really unexpected for me because it's the first medal for Kazakhstan in ladies (skating). I can't believe I landed that quad -- but when I stepped on the ice it just felt great and I knew I could do it."

Kihira finished fourth as Japan's best-placed skater in her first world championship appearance, earning a total of 223.49 points after a gorgeous free skate blotted only by a crash-landing on a brave second triple axel attempt.

Sakamoto slipped from second after the short programme to fifth with an overall score of 222.83 points, while 2018 bronze medallist Miyahara finished sixth on 215.95.

Below them American Mariah Bell and South Korean Lim Eun-soo rounded out the top 10, two days after Korean skate officials accused the American of deliberately trying to injure Lim while warming up for the short skate.