Residents of Japan began entering a ticket lottery on Thursday, hoping to land seats for next year's Tokyo Olympics. 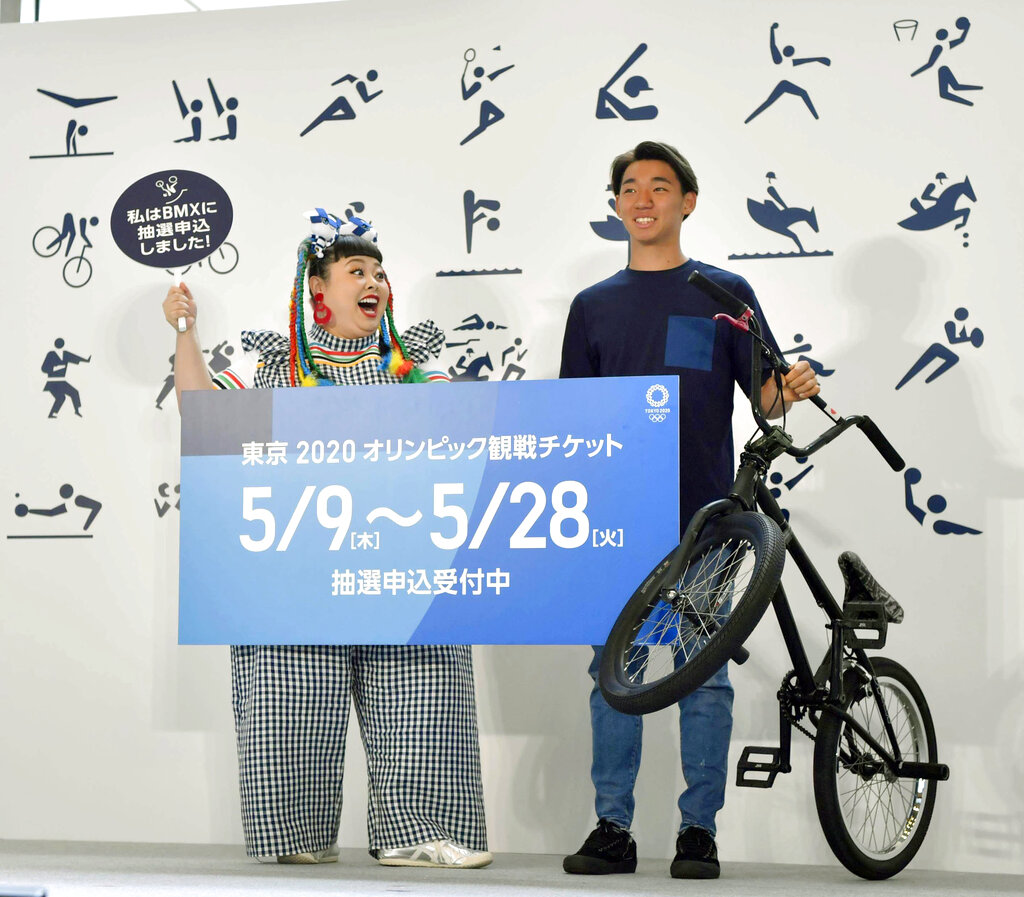 Japanese comedian Naomi Watanabe, left, and BMX rider Rimu Nakamura attend an event to mark the start of application to buy tickets for the 2020 Tokyo Olympic Games, in Tokyo Thursday, May 8, 2019. (Photos: AP)

People overseas will have to wait until June 15 when tickets are put on sale by special distributors in each country — known as Authorized Ticket Resellers.

Buying for Japan residents is straightforward. Applications are accepted at the organizing committee's website through May 28, with results announced on June 20. Anyone inside Japan — or outside Japan — can access the website. Although non-Japan residents cannot buy there, it offers event schedules, ticket prices in Japan, and venues.

Organizers estimate 7.8 million tickets will be available, with 20-30 percent dedicated to sales outside Japan.

This is the first phase of sales in Japan, with other chances available as the games get closer.

Buyers overseas will pay more because resellers — appointed by national Olympic committees — can tack on a 20% handling charge.

In addition, many popular tickets are packaged by resellers with top hotels and other perks, and the markups can be much more than 20%. Many of these packages are aimed at corporate buyers, for whom price is not always a concern. The resellers also run the risk of getting stuck with tickets they can't sell.

Hidenori Suzuki, the senior director of tickets for the Tokyo Olympics, has said resellers could have their licenses revoked if they set "inappropriate ticket prices."

The reseller for the United States is CoSport, which also handles sales in Australia, Jordan and several European countries.

Japan recently passed a law that bans selling tickets at above the original prices. Violators face fines of up to 1 million yen ($9,100), or a one-year jail term — or both.

Buyers outside Japan might get some deals if they are patient. It happened in Brazil. And it happened at the Pyeongchang Winter Olympics a year ago.

Tokyo organizers will open sales globally in the spring of 2020, meaning any remaining, unsold tickets can be purchased at the prices offered in Japan. In Rio de Janeiro, many tickets were unsold as the games neared, and some desirable tickets were put back into the pool after they were sold but never paid for.

Organizers hope to generate about $800 million from ticket sales, a large source of revenue for the $5.6 billion privately funded operating budget. Overall, Japan will spend about $20 billion to prepare for the games, and about 70 percent is public money.