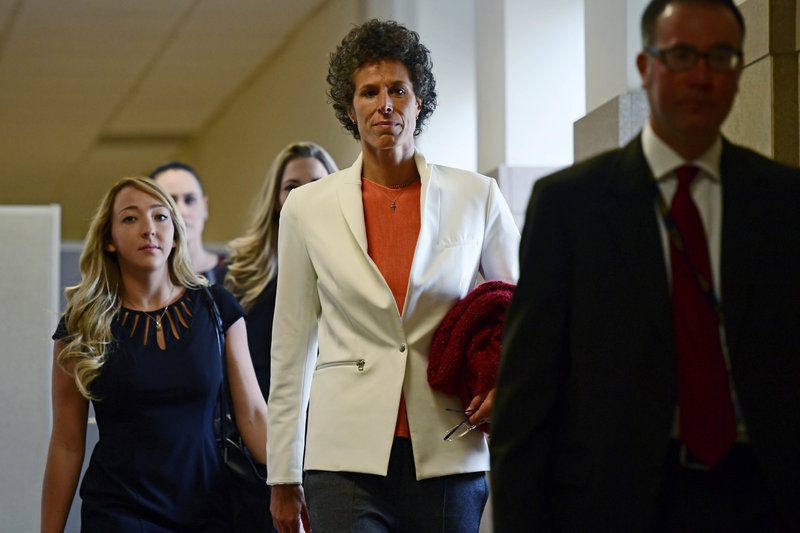 Bill Cosby’s chief accuser took the witness stand Friday at his sexual assault retrial, telling a jury she wants justice after five other women testified that the man once revered as “America’s Dad” is a serial rapist who harmed them too.

Andrea Constand’s appearance was her second chance to confront Cosby in court after his first trial ended with a hung jury. This time, though, she will face a defense team intent on portraying her as a “con artist” who framed him for money.

Cosby lawyer Tom Mesereau told jurors in an opening statement on Tuesday that Constand was a pauper who stiffed roommates on bills, racked up big credit card debt and once ran a Ponzi scheme until she “hit the jackpot” in 2006, when Cosby paid her $3.4 million to settle a civil lawsuit Constand filed after the district attorney at the time dropped the case.

Constand told jurors Friday she has nothing to gain financially now by wanting Cosby locked up.

“Ms. Constand, why are you here?” prosecutor Kristen Feden asked.

Constand, an athletic 6-footer who turned 45 this week, says Cosby drugged and molested her at his suburban Philadelphia mansion in January 2004, when she was a women’s basketball administrator at his alma mater, Temple University.

She said Cosby offered her pills after she said she was “stressed” about telling the Temple women’s basketball coach of her plans to leave to study massage therapy in her native Canada. He called the pills “your friends” and told her they would “help take the edge off.”

Instead, Constand said, the pills instead made her black out. She awoke to find Cosby penetrating her with his fingers and putting her hand on his penis. She said she was still incapacitated and “was not able to do anything” about the assault.

Her allegation is the only one among dozens against Cosby that has led to criminal charges. He says Constand consented to a sexual encounter and denies she was incapacitated.

Wyatt on Thursday derided the five additional accusers who testified as “distractors” and “advocates for the prosecution” and for Constand. Just one other accuser was permitted to take the stand at Cosby’s first trial.

The women, Wyatt said, traded in “poetic licensing, better known as alternative facts,” and were pawns in an “‘Ocean’s 11’-style script” cooked up by lawyers Gloria Allred and her daughter, Lisa Bloom, “to extort Mr. Cosby for $100 million.”

Allred floated a proposal that Cosby set aside a chunk of his fortune to compensate accusers, but he never agreed.

“Since this American citizen didn’t adhere to Ms. Allred’s ransom notice, she paraded in a stable of women to destroy his legacy, his career and reputation,” Wyatt said.

Constand’s lawyer, Dolores Troiani, called the attacks on her client “outrageous” and “baseless,” and ripped Cosby’s team for trashing her reputation in the courtroom, where lawyers are immune from defamation lawsuits — and in statements to the media.

“I’d love to see if he thinks he’s going to prove any of this,” Troiani told The Associated Press ahead of Constand’s testimony. “What basis does he have for any of this? So he gets to say whatever he wants and once again they go outside, they slander her outside of the courtroom and what is her recourse?”

Troiani was peeved at the defense for fighting to disclose the settlement figure to jurors in what she said was a clear violation of the confidential settlement agreement Cosby and Constand struck.

“This is the type of man Cosby is,” she said. “We had an agreement, and that agreement was supposed to be for both sides. It’s not hush money, and I really resent people calling it hush money. It’s compensation for the damages done to her.”

The defense says Constand outlined her get-rich scheme to a Temple colleague, Marguerite Jackson. Cosby’s lawyers plans to call Jackson as a witness and say she will testify that Constand mused about framing a celebrity before she lodged sexual abuse allegations against Cosby in 2005.

Jackson, a longtime Temple official, has said that she and Constand worked closely together, had been friends and had shared hotel rooms several times. She has said Constand once commented to her about setting up a “high-profile person” and filing suit.

On the stand Friday, Constand said she remembers having a hotel room to herself at Temple’s away basketball games and did not recall ever rooming with Jackson.

The AP does not typically identify people who say they are victims of sexual assault unless they grant permission, which Constand and the other women have done.