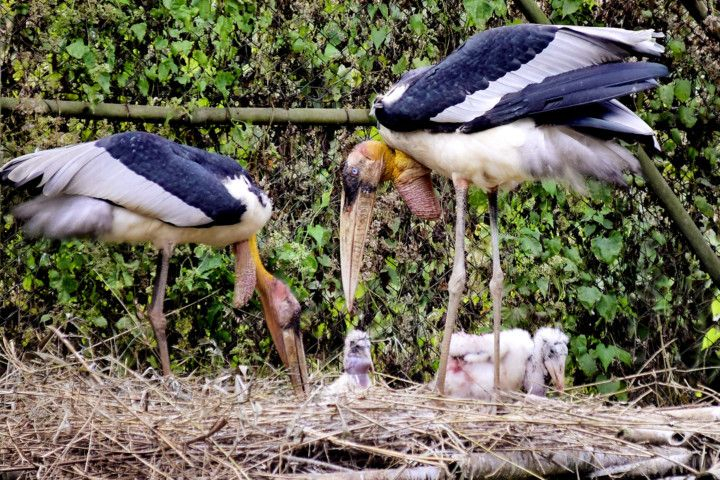 The hatching of two storks on a bamboo platform in a remote Indian zoo has raised hopes that one of the world's most threatened bird species can be saved, experts say.

The two Greater Adjutant chicks have gone on display at Assam State Zoo weeks after they hatched in the northeast Indian state.

The Greater Adjutant, standing 1.5 meters tall with a 2.5 meters wing-span, is on the red list of threatened species kept by the International Union for Conservation of Nature.

With the gradual destruction of their forest and wetland breeding habitat, there are believed to be only about 1,000 of the storks left in India and Cambodia.

"We do not have any report that this endangered bird has bred (before) in any zoo or in captivity," said Assam zoo chief Tejas Mariswamy.

"This success will lead to similar experiment elsewhere in the world and will help conserve and protect the birds," added Bibhab Talukdar, head of the Aaranyak conservation group that worked with the zoo to help breeding.

The storks, known as "hargilla" (bone swallower) in the Assamese language, were shunned before because of their smelly droppings, noisy calls and messy eating habits.

But the Aaranyak project led a campaign to rehabilitate the species and its reputation in recent years.

It assembled an award-winning brigade of village women conservationists to protect their nesting grounds, and set up the breeding platforms with Assam zoo in 2017.

"Finally we found success on November 26, 2019 when the first chick hatched," said Purnima Devi Barman, who leads the project.

Two three meter high bamboo platforms were erected in the zoo. The platform was about one meter wide, the size of the stork's natural nest.

Nesting materials used by the birds in the wild were brought in for the Greater Adjutants to find.

"The commotion created by zoo visitors was also monitored and care was taken so that the birds did not suffer from disturbance," said Mariswamy.

It is now only found in a few isolated districts in Assam and Bihar in India, and Prek Toal in Cambodia.

Bibhab said the loss of the tall trees where they usually nest, as well as poaching and poisoning have become major threats to the species.

"Many historical breeding colonies have been lost," he said.