One dead, 25 hurt in Greece fires as Sweden battles blazes 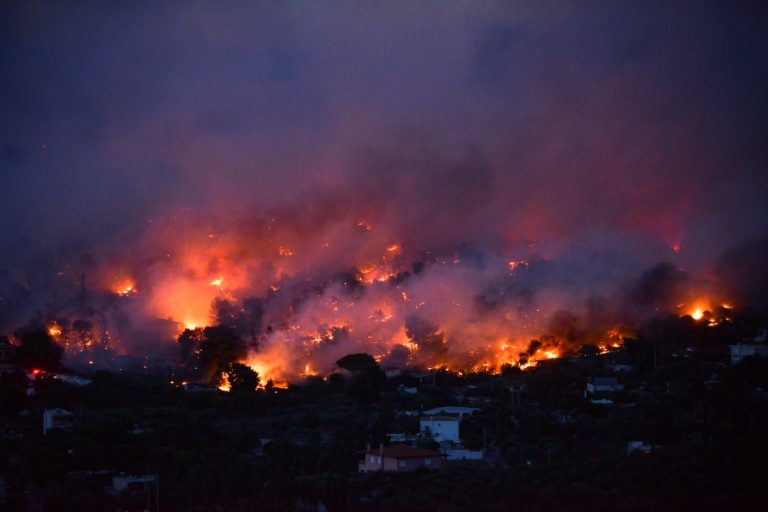 At least one person was killed and 25 others injured as wild fires tore through woodland and villages around Athens on Monday, Greek authorities said, as blazes caused widespread damage in Sweden and other northern European nations.

Ekav said it had transferred 25 people to hospital, among them four who were seriously injured.

Video footage showed inhabitants fleeing the fires by car, with several buildings and homes damaged, as the region of Attica -- where Athens is situated -- declared a state of emergency.

"If I hadn't left, I'd have been burned," a 67-year-old resident who gave her name as Maria told AFP.

Near the town of Marathon, several residents fled to safety along the beach, while some 600 children were evacuated from holiday camps in the area.

Tsipras said that "all emergency forces have been mobilised" to battle fires along at least three fronts.

Emergency services were banking on a drop in 60-kilometre-per-hour winds but the forecast for the region -- which has experienced temperatures topping 40 Celsius (104 Fahrenheit) -- suggest conditions would remain challenging into Tuesday.

Smoke from the blazes blotted out the sun over the famed Parthenon temple in Athens, where some ministries closed in the afternoon due to the soaring heat.

Also on Monday, Sweden's civil protection agency MSB said there were 27 active fires across the country, as temperatures were expected to soar as high as 35 Celsius (95 Fahrenheit) this week.

Other European countries including France, Italy and Germany have sent a mix of plane, trucks and firefighters to help tackle the blazes as Sweden, where usual summer temperatures are closer to 23 Celsius, has struggled to contain the crisis.

At least four of the fires had not been brought under control, MSB said, and weather conditions were unfavourable.

Sweden is experiencing an unprecedented drought and soaring temperatures which have reached the highest in a century.

"The risk is extreme" in the southern part of Sweden, with the heatwave leaving forests tinder dry with no rain likely, MSB head of operations Britta Ramberg told a news conference.

Ramberg said anybody lighting fires or barbecues would face prosecution.

There has been practically no rain since the beginning of May in the Nordic country, aside from a paltry 13 millimetres in mid-June.

The Forestry Bureau said in a statement Monday that the value of the destroyed forests was 900 million kronor (87 million euros).

Other northern European nations have been struggling to contain forest fires as the temperature shows no sign of dropping.

In Finland's northernmost Lapland province, fires have ravaged wood and grassland close to the border with Russia.

Norway, which this year experienced its hottest May temperatures on record, has also seen several small fires, and one firefighter was killed on July 15 while trying to contain a blaze.

Fires have raged for five days in Latvia, destroying more than 800 hectares (2,000 acres) in the Baltic state's western regions.

Meteorologists warned that the high temperatures are persisting and no rain is expected in Latvia for the next two weeks.