CULTURE One of the sleepers, Berdych, reawakens rivalry with Nadal

One of the sleepers, Berdych, reawakens rivalry with Nadal 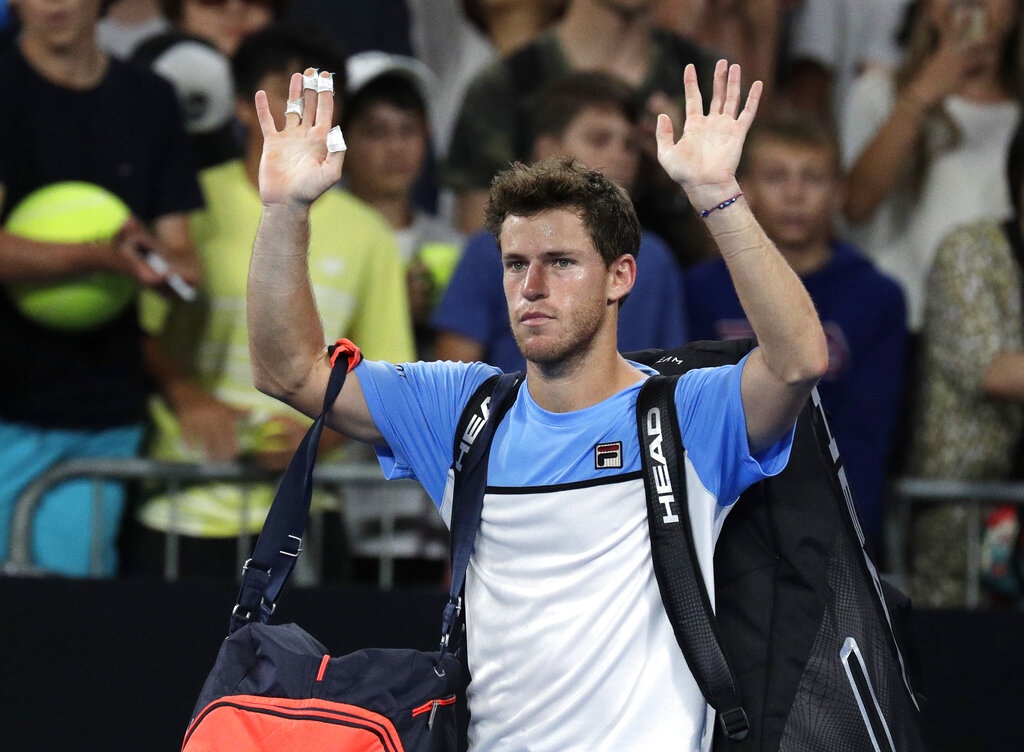 Argentina's Diego Schwartzman waves as he leaves the court following his third round loss to Tomas Berdych of the Czech Republic at the Australian Open tennis championships in Melbourne, Australia, Friday, Jan. 18, 2019. (Photos: AP)

Care to guess who? It's Tomas Berdych, the 2010 Wimbledon finalist. He next plays Rafael Nadal, who has reached the second week at Melbourne Park a dozen times.

Of the ATP's other so-called sleepers, Milos Raonic is still in contention in the other half.

The big-serving Canadian's win over 2014 champion Stan Warwinka took one of them out of equation. The other, 2008 runner-up Jo-Wilfried Tsonga, lost to top-ranked Novak Djokovic in a second-round rematch of the 2008 Australian final.

That leaves Berdych first among the quartet into the second week.

Berdych is outnumbered by Nadal on almost every statistic bar one — the 33-year-old Czech had more time on the sidelines last year with injury. 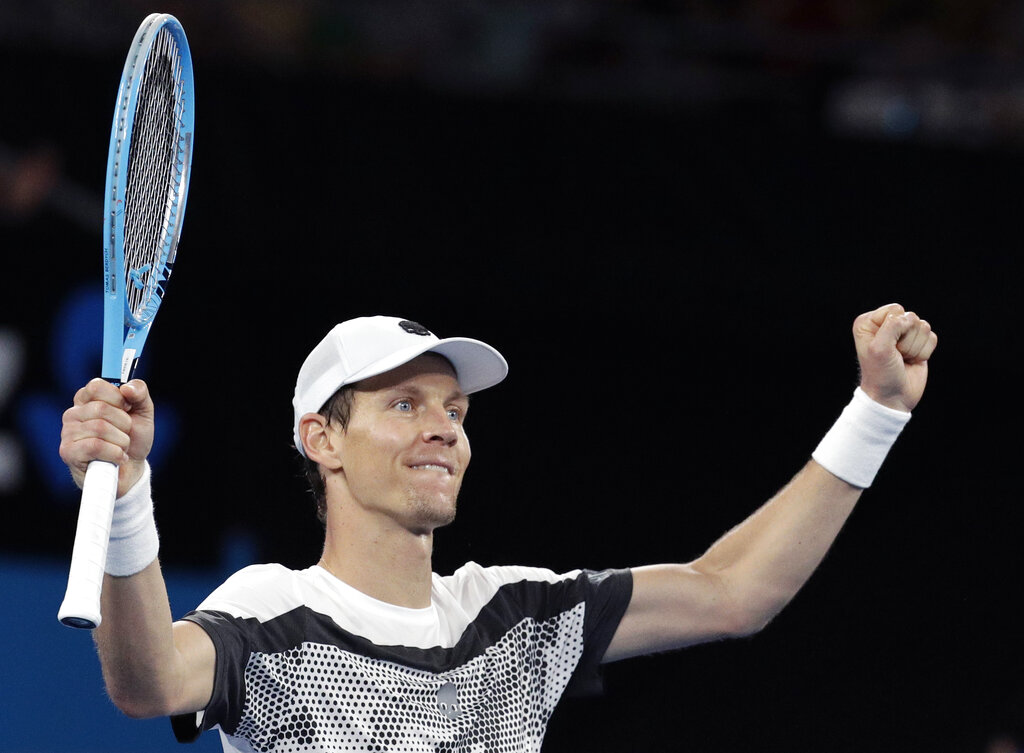 Tomas Berdych of the Czech Republic celebrates after defeating Argentina's Diego Schwartzman during their third round match at the Australian Open tennis championships in Melbourne, Australia, Friday, Jan. 18, 2019.

"I don't say I'm here, ready to win the tournament, because you never know what's going on," Nadal said. "The only thing that I can say is I won three good matches, and now I have another tough opponent in front that he's playing great.

"He started the season at a very high level. So going to be a very big test for me."

Coming off six months out because of a back injury, Berdych is unseeded at a major for the first time since 2005 and lurking in the draw as a difficult early-round rival for top players.

He beat No. 13-seeded Kyle Edmund, a semifinalist here last year, and Robin Haase. Now his path winds back to a long-time road block. 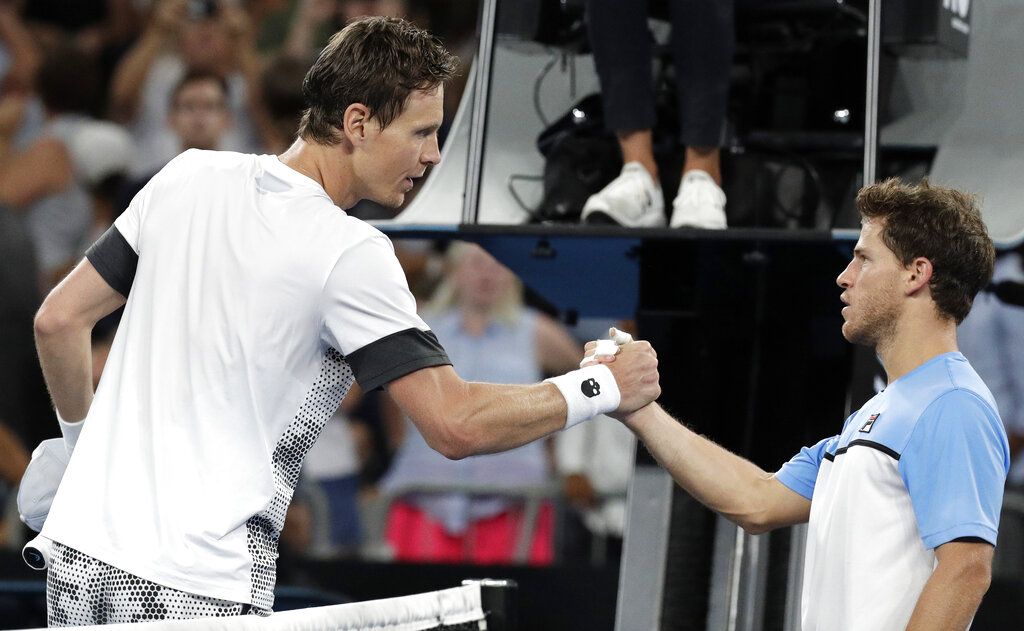 Tomas Berdych, left, of the Czech Republic is congratulated by Argentina's Diego Schwartzman after winning their third round match at the Australian Open tennis championships in Melbourne, Australia, Friday, Jan. 18, 2019.

Second-seed Nadal, a 17-time major winner, is coming off three months on the sidelines with knee and ankle injuries but has hit form quickly.

Nadal leads their career head-to-heads 19-4, but Berdych's win in the quarterfinals here in 2015 will keep it interesting.

Berdych said he feels fresher physically and mentally after his time out.

"The way I see things. It's all together. It comes up to the result that I'm really feeling very good on court," he said. "Yes it's a combination of a different preparation, a different approach. Quite a lot of changes for me in the last six months.

"Seems they're paying off."

Berdych has been on the tour during the domination of the so-called Big Four — Roger Federer, Nadal, Djokovic and Andy Murray — and perhaps could have won a major if he'd played in another era. But it doesn't bother him as he heads into the twilight of his career.

"Our generation is too strong. It's just proved by the results," he said. "You have a clear fact, clear results. That's so far how it is.

"The only change is, we're just getting older — it's a process you cannot stop. One day it's going to get ended. The young ones are going to take over. We're just trying to do our best."

Cover image: Tomas Berdych of the Czech Republic celebrates after defeating Argentina's Diego Schwartzman during their third round match at the Australian Open tennis championships in Melbourne, Australia, Friday, Jan. 18, 2019.