CULTURE Organizers cater to the growing enthusiasm for camping

Organizers cater to the growing enthusiasm for camping 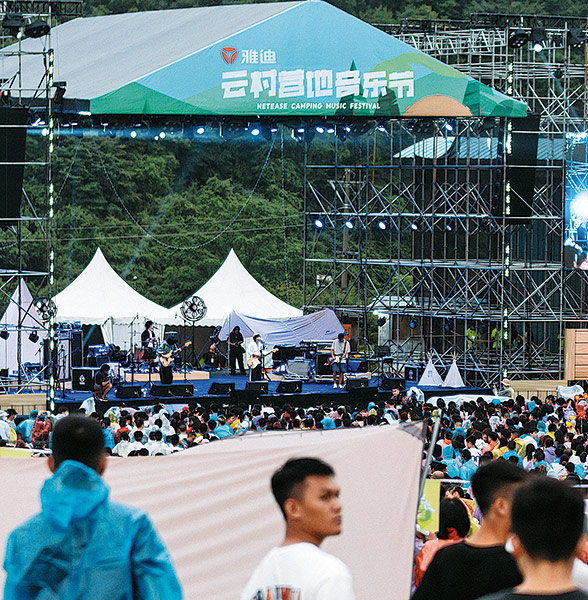 The NetEase Camping Music Festival is staged at the Xiannyu Mountain scenic spot in Chongqing on July 17. [Photo provided to China Daily]

The setting sun cast a glow over the green hills and white tents on a vast area of grassland as fans attended a music event this month at a scenic spot in Chongqing.

Vocalists performed on stage at the NetEase Camping Music Festival as many in the 5,000-strong audience uttered shouts of delight, which reverberated through the Xiannyu Mountain scenic spot.

The appearance of tents at the event was further evidence that organizers of such festivals are catering to the growing desire for camping among fans.

In October, camping playlists-songs shared on the NetEase Cloud Music platform by people who go camping-attracted a large number of streams, marking stellar year-on-year growth of 536 percent, according to a report released by the music service provider earlier this year.

Xing Yue, who was in charge of staging the festival, said: "Combining camping and music is becoming the general trend. As outbreaks of COVID-19 have disrupted life from time to time this year, we hoped that young people would get together to enjoy music outdoors at this event."

Food vendors set up stands at the festival, while fans also experienced activities such as making handicraft at a pop-up workshop, practicing yoga in a tent, and learning from a bartender how to mix a drink.

Xing said the festival's camping elements will attract more potential partners to provide a range of goods and services at the event, adding to the experience for visitors.

"Although the festival is mainly targeted at young people, it attracts numerous families, who attend with children and seniors," she said.

Snow51, a company that promotes skiing, camping and other outdoor activities among urban residents, is aiming to create a more enjoyable experience for campers by inviting musicians to play instruments such as drums, harmonicas, marimbas and guitars at campsites.

Those attending the festival were also encouraged to record the different sounds they heard at the campsite, such as steak sizzling in a pan and the crackling of a bonfire. They then joined the instrumentalists to perform a creative work that included these sounds.

Zhu Ji, vice-president of Snow51, said more people are attempting to use art, music and sports to enrich their camping experience.

"I believe that the desire among urban residents to embrace a high-quality experience in nature will result in camping being integrated with various businesses," he said.

Zhang Tianyao, 25, who has attended about a dozen such music events, said camping provides the ideal setting for social interaction among young people, who set up camps together, prepare barbecues and play board games under canopies.

"After graduating from college, many of us seldom have the chance to make new friends, especially in view of the pandemic," he said. "Young people are eager to expand their social circle through face-to-face interaction by taking part in activities themed on camping."

"I particularly like camping at music festivals held in remote areas that feature performances by ethnic groups such as the Yi people and the Naxi people," said Zhang, a native of Yunnan province.

"At such events, the surroundings help us better connect with the music and those who created it-the ethnic people living deep in the mountains."